How the Jesuits of ‘America’ heroically defended booze against Prohibition 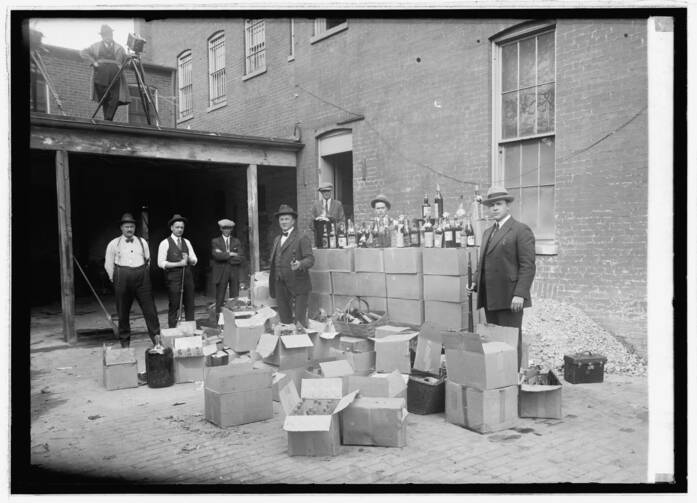 By the time the 18th Amendment to the U.S. Constitution went into effect in January 1920, prohibiting the manufacture, transport or sale of alcoholic beverages throughout the United States, 33 state legislatures out of 48 had taken it upon themselves to enact their own laws banning alcohol. Temperance societies and the Anti-Saloon League enjoyed significant influence in political institutions across the nation. While Prohibition’s popularity would wane by the end of the decade because of its unintended consequences—greater lawlessness, violence and widespread bootlegging—at the time of its ratification and implementation, it enjoyed a fair amount of popular support.

Except in the pages of America.

While Prohibition’s popularity would wane by the end of the decade, at the time of its ratification and implementation, it enjoyed a fair amount of popular support.

In the state of Virginia, wrote the editors (all Jesuit priests and brothers at the time) in an April 1919 editorial, “a small army of detectives and ‘stool pigeons’” existed whose enforcement of that state’s Prohibition ordinance constituted “a menace to the peace and welfare of the community, immeasurably greater than the disorderly conduct of a mob of drunkards.”

The editors were just getting started. A paragraph later, they added:

If the citizens of Virginia, or of any other State, put the machinery of government into the hands of fanatics, who care nothing either for good government or for religion, provided they continue to draw a munificent salary in the propagation of Mohammedan tenets, these same good citizens have only themselves to blame.

A month later, they editorialized that Prohibition should be enforced equally against “the barons of wealth” as it would be against “the street-cleaner,” noting that “[t]he rich are ‘stocking up,’ and will suffer no want; but after his day of exhausting labor, the poor man may not have so much as a single glass of harmless, necessary beer.” And had the U.S. Senate vote on the 18th Amendment been taken by secret ballot, the editors argued later that year, it would have met with certain defeat—as some of the same senators who argued most vociferously in favor of Prohibition were noted partakers of liquor.

”After his day of exhausting labor, the poor man may not have so much as a single glass of harmless, necessary beer.”

From those early days before the 18th Amendment was passed until the day it was repealed in 1933, the editors and more than a few contributors kept up a steady drumbeat against Prohibition, though they more frequently criticized the Volstead Act, the U.S. law passed to enforce the 18th Amendment. (Many an American Catholic knew it was a fool’s errand in those years to criticize the Constitution itself.) Often the argument was presented as a case of states’ rights against an overreaching federal government. Doctors, the editors also warned, would be unable to take advantage of alcohol’s positive medicinal effects for their patients. Even U.S. passenger liners and shipping companies would fail, the editors suggested, “if they have to compete with foreign vessels that dispense liquor to passengers.”

From the days before the 18th Amendment was passed until the day it was repealed in 1933, the editors of America and more than a few contributors kept up a steady drumbeat against Prohibition.

A Plot Against Catholics?

A more novel accusation appeared in an editorial published in August 1919, “Federal Prohibition and the Mass,” suggesting a certain anti-Catholic bias in the technical language used to enforce Prohibition. Would the government try to ban the use of sacramental wine? Such “wearisome and difficult technicalities may satisfy some of our Prohibitionist brethren of the milder variety,” wrote the editors. “To others, however, they seem to mark the beginning of the era in which the celebration of the Holy Sacrifice of the Mass can be made to depend on the favor of an internal revenue officer.” If it were to come down to “a choice between Prohibition and the Mass,” they warned, “it is not the Mass that will be protected.”

The magazine returned to the theme two years later:

In 1925, the editors denounced the Anti-Saloon League and accused it of openly plotting against Catholics, sarcastically calling them “the good people who live in dread of the day when the Holy Father will order all Catholic Americans to capture the White House or the Washington Monument, or, if nothing better offers, even Congress.” The next year, they approvingly quoted Cardinal William Henry O’Connell, the archbishop of Boston: “Compulsory universal prohibition is a different thing, for compulsory prohibition, in general, is flatly opposed to Holy Scripture and Catholic tradition.”

The editors added: “We are not troubled by the accusation that we head the list of the brewers’ beneficiaries. The sole interest of this Review is to assert Catholic and constitutional principles, in the hope that peace and good order may be secured through the practice of temperance in all things.”

Another frequent complaint in the pages of America was that Prohibition was unevenly enforced, with the poor and the immigrant suffering most while the rich were drinking champagne in the comfort of their homes. Furthermore, driving liquor production and consumption underground was corrupting those “who never drank before, especially women” and young men who “trace the bootlegger to his lair.” Norway’s similar Prohibition laws had created, the editors noted, a country awash in illegal booze: “Even women, it is said, are acquiring a taste for strong drink.”

After passage of the 18th Amendment, what had at first been short editorial asides against Prohibition’s apparent promotion of illegal behavior grew into far-ranging broadsides against the legislation’s scope and effect. Calling Prohibition “the most stupid and most insincere of all our laws” in 1922, the editors listed its consequences:

[W]idespread and absolute disrespect for the principle of authority, an army of desperate bootleggers who are growing rich through lawlessness, hosts of half-hearted Prohibition agents, around whom run rivers of whisky that arise from inexhaustible fountains and flow into the houses and clubs of the rich man, an enormous increase of drunkenness and deaths from alcoholism, a great rise in the tax-rate, international complications, and many other more or less serious detriments.

In 1930, the editors declared that the Volstead Act “has transferred the saloon to the family kitchen” and that “the shelves, on which mother used to range the family supply of jams, jellies and catsups, are now occupied by bottles and jugs containing noisome mixtures concocted by father.”

"The shelves, on which mother used to range the family supply of jams, jellies and catsups, are now occupied by bottles and jugs containing noisome mixtures concocted by father.”

By the end of the decade, the editors had a new target: the vast sums spent on enforcement of the Volstead Act. It was estimated the federal government would spend $50 million to enforce Prohibition in 1929 alone. Further, the editors noted, vast tax revenues had been lost. “In the last five years before Prohibition the legitimate trade in alcoholic beverages netted the Government more than a billion dollars,” they wrote. “Since the advent of Prohibition, the money which went to the Government, goes to the bootlegger.” In 1932, the editors estimated that over the previous 12 years, the federal government had spent more than $700 million on Prohibition enforcement—and was running a massive deficit for several of those years as a result of the Great Depression.

It became clear in the early 1930s that Prohibition was increasingly unpopular across the nation. Colleges and universities, once fertile breeding grounds for temperance and total-abstinence advocates, were now populated with students who regarded Prohibition as something of a joke. More significantly, the coalition of religious organizations, temperance societies and social groups like the Anti-Saloon League that had led the anti-alcohol crusade in the United States had lost much of its influence with Congress. No longer could it “whistle its cringing Congressman to heel, and feel assured that he will respond, every man of them with a dry vote in his hand, if perhaps, a bottle of whiskey in his pocket,” the editors wrote in September 1930.

President Herbert Hoover, who had once called Prohibition a “great social and economic experiment, noble in motive and far-reaching in purpose,” admitted during his re-election campaign in 1932 that it had proved such a failure that “I cannot consent to a continuation of this regime.”

The Relief of Repeal

It became clear in late 1933 that enough states would vote for the repeal of the 18th Amendment through the ratification of the 21st Amendment (though prohibition was still allowed at state and local levels), bringing Prohibition to an end. America’s editors celebrated its repeal, calling Prohibition a “disastrous attack upon public and private peace and sobriety” and suggested that “many a Congressman had to be awakened in time to vote for a new dry-bill with a whiskey breath.”

On Dec. 5, 1933, Prohibition officially ended. “For this relief, we thank God,” wrote the editors. What lessons were learned?

It is now our work to draw what profit we can from the direful experience of the last sixteen years, fourteen of them under the Eighteenth Amendment, and to look to the future. We have learned the folly, please God, of vesting the Federal Government with duties which under this form of government belong to the respective States. We have learned that it is a crime against civilization to substitute violence for the benign influence of religion.

@jamestkeane
Show Comments ()
Join the conversation: Login or create an account
Before you can comment, you need to update your profile to include your first and last name, as required in our comments policy. Then reload this page and you'll be set up for commenting. Update your profile
Show Comments (
1
)
Comments are automatically closed two weeks after an article's initial publication. See our comments policy for more.
Zac Davis
2 years 2 months ago