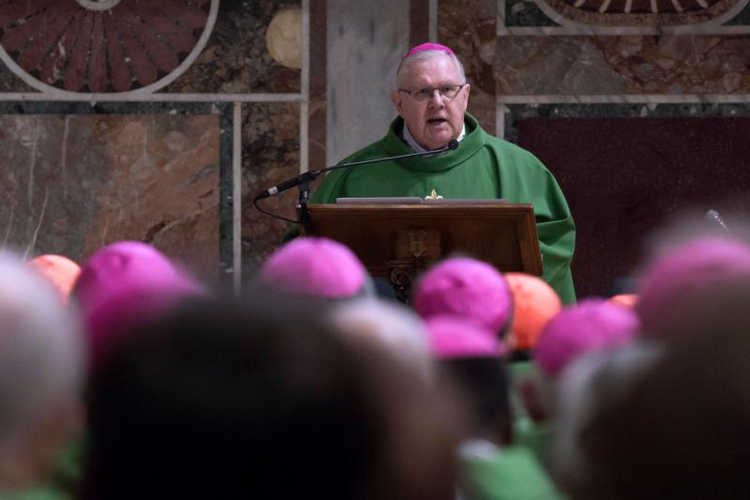 Archbishop Mark Coleridge of Brisbane, president of the Australian bishops' conference, gives the homily during Mass at a meeting on the protection of minors in the church at the Vatican Feb. 24, 2019. (CNS photo/Maria Grazia Picciarella)

YANGON, Myanmar (CNS) -- A six-person committee charged with reviewing church governance and management is expected to present Australia's bishops with a plan to overhaul the management of the church in the country.

The plan would cede control over financial, human resources and governance functions to professional laity, Jack de Groot, a member of the review committee, told Catholic News Service. The committee, established by the Australian Catholics Bishops' Conference and Catholic Religious Australia in May 2018, expects to present the plan by late March.

It is the latest in a series of responses by the Australian church to the country's Royal Commission Into Institutional Child Sexual Abuse, which uncovered and documented the tragic history of abuses in religious and secular organizations, including Catholic-run schools and orphanages across the country.

The commission found the Catholic Church, the denomination in Australia with the most followers, to be the worst offender and, since then, hundreds of millions of dollars have been paid in compensation to victims. Dozens of offenders, including many clerics, have been imprisoned.

In June 2018, the government established a National Redress Scheme to provide support and compensation to survivors, although many have still chosen to pursue perpetrators through the courts. Catholic bishops and religious have been working to act on the series of recommendations handed down by the commissioners in August 2017.

"The past year has seen steady and significant progress made across a range of areas, including in education, in governance reform and in responding to victims and survivors of child sexual abuse," Archbishop Mark Coleridge, president of the Australian bishops' conference, said in a progress report in mid-December. "Clearly, any institution that engages with young people must always be vigilant, working to ensure that strong and effective protocols and procedures are in place, generating a culture committed to prompt and decisive action when allegations arise."

"We have a draft plan," he said, although he admitted it had been delayed from its original October target by the need to finalize an update for the Australian government on the church's response to the Royal Commission recommendations.

A review of the governance of the Catholic Church was one of commission's central recommendations.

The review committee is chaired by Justice Neville Owen, former senior judge of the Court of Appeal of the Supreme Court of Western Australia and former chair of the Truth, Justice and Healing Council, which facilitated the church's engagement with the Royal Commission. He a current member of the Pontifical Commission for the Protection of Minors.

Along with de Groot, the review committee's other members are Pauline Connelly, chancellor of the Archdiocese of Adelaide; Father Brendan Daly, lecturer in canon law; Schonstatt Sister Isabell Naumann, president of the Catholic Institute of Sydney; Susan Pascoe, president and chair of the Australian Council for International Development; and John Warhurst, retired professor of political science at the Australian National University and chair of Concerned Catholics Canberra Goulburn.

A five-page project plan for the review into the management of dioceses and parishes, released last May, said in its introduction: "The appalling revelations of widespread sexual abuse of children by clerics and in church organizations and the mishandling of complaints of abuse have been a lightning rod attracting and focusing attention on calls for cultural and practical renewal and reforms as an essential part of the response to the tragedy."

"If there is to be a restoration of trust and credibility in the church in a way that will make it a safe place for all who come to it and that will enable it to proclaim its Gospel mission, there must be 'real social and cultural transformation.' This can only occur if all of the people of God are involved in the way the church is governed."

De Groot said there had been resistance to the review, and any moves to change the traditional management of the church, from more conservative church members.

Sydney Archbishop Anthony Fisher and Melbourne Archbishop Peter Comensoli have rejected some of the commission's recommendations, including the legal lifting of the secrecy of the confessional, which is either in the legislative process or has been passed into law by all Australia's six states and two territories.

Archbishop Comensoli has said he would rather go to jail that obey the law passed by the Victoria state parliament last year.

Show Comments ()
Comments are automatically closed two weeks after an article's initial publication. See our comments policy for more.
Provide feedback on this article
Join the conversation: Login or create an account
Before you can comment, you need to update your profile to include your first and last name, as required in our comments policy. Then reload this page and you'll be set up for commenting. Update your profile
Advertisement
More: Australia / Bishops