Pope Francis: More must be done to include women in church bodies

Pope Francis: More must be done to include women in church bodies 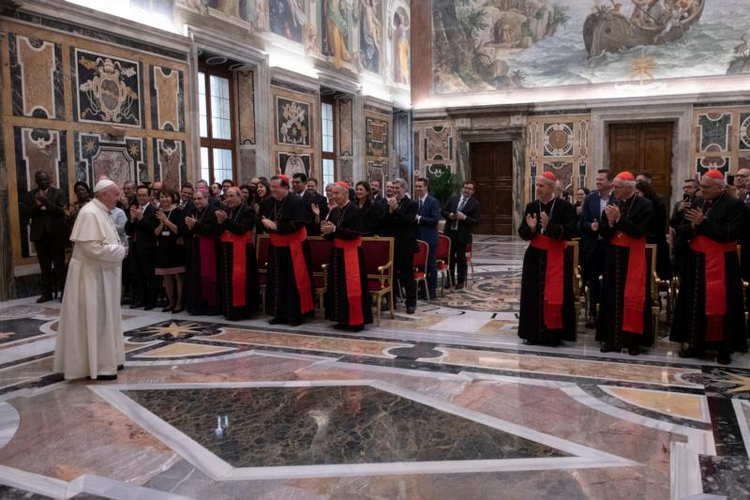 Pope Francis arrives for a meeting with members and consultants of the Dicastery for Laity, the Family and Life in the apostolic palace of the Vatican Nov. 16, 2019. The dicastery was holding its first plenary assembly since its creation in 2016. (CNS photo/Vatican Media)

VATICAN CITY (CNS) -- Although people may have different ways of praying or of serving their parish or the poor, the Catholic Church needs laity, priests, religious, parishes and lay movements to collaborate in order to be truly "catholic," Pope Francis said.

More also must be done to include women in roles of advising and governance, but without reducing them to having just a "functional" role, he said, speaking Nov. 16 to members and consultants of the Dicastery for Laity, the Family and Life, which was holding its first plenary assembly since its creation in 2016.

The task of dicastery members and consultants, he said, is to see the world around them with "the heart of the church," that is, to go beyond one's personal, local interests to seeing the wider, "catholic" view of the universal church and the whole world.

The church, as a mother, wishes for "harmony among all her children and does not engage in favoritism or partiality," he said.

"Therefore, it is important also for (the dicastery) to always propose positive models of collaboration among laity, priests and consecrated men and women, among priests and faithful, among diocesan and parish organizations, and lay movements and associations, among young and old, to avoid sterile comparisons and rivalries and always to encourage fraternal collaboration with the aim of the common good of the one family which is the church."

The identity and mission of the lay faithful involves being able to look upon others as a fellow brother or sister. "You are not 'social engineers' or 'ecclesiastics' who draw up strategies to apply in the whole world to spread a certain religious ideology among laity," the pope said.

"You are called to think and act like 'brothers and sisters in the faith,'" rooted in a personal encounter with God, nourished by the sacraments, he said. They must have a life of prayer and closeness to God, he added.

The pope warned against the "clericalization" of the laity, pointing specifically to problems he has seen with permanent deacons. In Buenos Aires, Argentina, he said, there was a common tendency to want to turn excellent laymen into deacons or when someone became a permanent deacon he would end up as a "wannabe" priest.

Deacons are "custodians of service" in a diocese, not "first-class altar boys or second-class priests. This (issue of) clericalization is an important point," he said.

The second important point, he said, is not to be afraid to do more in putting women in advisory and governance roles.

Women can be the head of a Vatican dicastery, he said. In fact, two women were on the final list of candidates for leading the Secretariat for the Economy -- a position filled Nov. 15 when Pope Francis named Jesuit Father Juan Antonio Guerrero.

The role of women must be more than just "functional," he said.

"What is very important is women's advice," he said, citing specifically the "enriching" and very different perspective provided by women attending the abuse summit at the Vatican in February.