After a health scare, I learned my heart is strong—but now I’m worried about my faith. 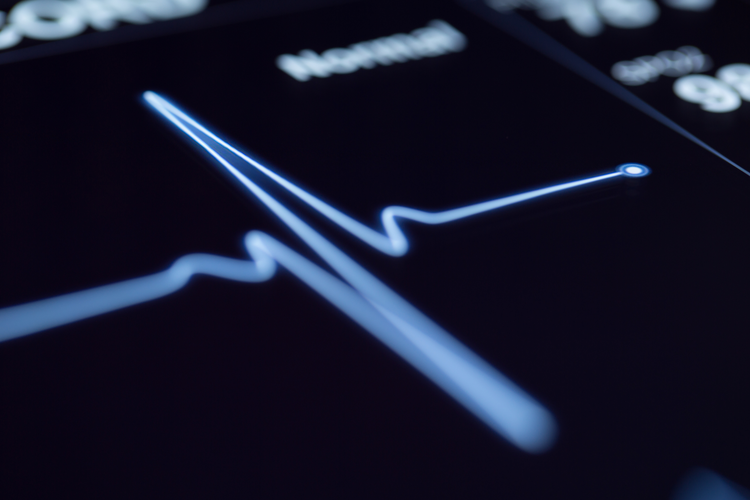 Perhaps a reminder of my creaking aging body, a random fainting spell required me to pursue further medical investigation into its cause. I was pretty sure that my collapsing at a reception, prompted by prolonged standing in a hot room and a glass of wine on an empty stomach, had injured my pride more than anything else. But I’d promised to follow up with my doctor for a check-up and bloodwork. These exams were followed by an EKG, the set-up for which lasted longer than the actual test, and which yielded a slip of spidery script indicating a healthy heart. Nevertheless, the doctor wanted more: I was scheduled for an echocardiogram.

A week later I put on a voluminous cotton gown, soft and faded from a thousand washings, and awaited instructions. The technician, a pale-voiced young woman, explained the process and the instrument that would record my heart’s behavior. The gel she applied to facilitate the wand’s ultrasound transmission of information suddenly reminded me of previous experiences with this goop: the fetal heartbeat monitor that had detected the early existence of each of my daughters in utero. This time the probe pushed lightly into my chest rather than my belly, seeking not another’s heart but my own.

My faith felt as weak as my heart had sounded strong. It was only my reliance on the Eucharist that kept me in the pew.

As the whoosh of my heartbeat flooded the darkened room, I, too, was inundated by the memory of those four long-ago heartbeats, so many times faster than my own. I was transported back to the obstetrician’s office, almost palpably back into my younger skin, hearing for the first time in each pregnancy the presence of a heartbeat other than mine as it skittered around the room, marveling at the divine cleverness that made possible this miracle of new life, rejoicing and worrying in equal parts for this baby’s development into a daughter to love beyond measure. The technician this day was probably younger than my youngest daughter, and I do not know that she would have understood the lone tear that escaped my left eye as I lay on my left side while she charted my heartbeat.

My heart appeared as a dark red-black blob on her monitor. The white line clearly visible was my pericardium, she told me when I asked. I had suspected it was some sort of solidly blocked artery. I braced for the evidence of impending death. That is what I got for watching her work and thinking I knew anything at all about what I could see. Of course, I also knew that no matter what she saw on that screen, she would maintain her practiced poker face.

Just as I took care to exercise physically for the endurance of my heart, I needed to break a spiritual sweat for the good of my soul.

I left with the echo of past babies on my mind and in my heart.

Two weeks later I received the emailed verdict from an anonymous cardiologist: “Please inform patient, echocardiogram normal.” Slow down with the techno-babble, Doc, I thought. I was glad that I could tell my family that I was done fainting, that I would likely be around for a while, that my heart was normal. But I could have sworn I had felt it break just a little while remembering those four hummingbird heartbeats, deep in my womb, safe and sound, the safest I was ever able to keep them.

As I sat in Mass the next Sunday, I prayed in gratitude for my heart’s resilience. But as my mind drifted through a listless homily and as my unspoken criticism of the preacher grew, I admitted to a different malady: the indifference of my faith. My creaking aging faith. It had been faltering for a while. Maybe what I needed was the equivalent of an echocardiogram of the soul. What spiritual test could diagnose the trouble in my depths? There was the examination of consciousness, the examen, which I did only sporadically. There was the sacrament of reconciliation, which I did rarely. These practices would yield no tangible print-out, no clinical prognosis, for the cold apathy I was feeling of late. But I was in need of some godly medicine. My faith felt as weak as my heart had sounded strong. It was only my reliance on the Eucharist that kept me in the pew.

That night, as I laboriously put myself through the paces of the examen, it occurred to me that just as I took care to exercise physically for the endurance of my heart, I needed to break a spiritual sweat for the good of my soul. The test indicated the need for both a regimen and a commitment to stick to it. I needed to work out, to strengthen my muscles of mercy and compassion. Instead of focusing on the deficiency of a homilist, for example, I could make a safe space within me for human frailty, my own included. Instead of going through the motions of Catholic practice, I could let my soul lead the prayer. Instead of keeping myself separate from the community of believers, I could join the team. Then might the echo of God’s call sound through my being like a heartbeat, steady and hardy and insistent. Then might God inform me, soul is normal.

@vsschultz1
Show Comments ()
Join the conversation: Login or create an account
Before you can comment, you need to update your profile to include your first and last name, as required in our comments policy. Then reload this page and you'll be set up for commenting. Update your profile
Show Comments ()
Comments are automatically closed two weeks after an article's initial publication. See our comments policy for more.