The scriptural case for women deacons 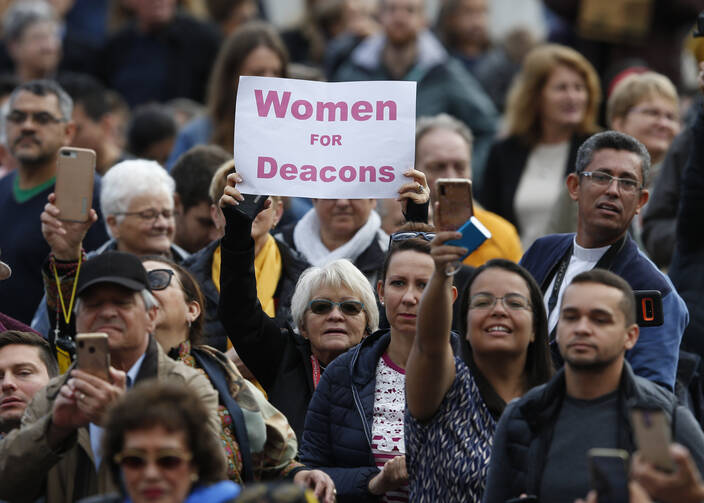 A woman holds a sign in support of women deacons as Pope Francis leads his general audience in St. Peter's Square at the Vatican on Nov. 6. (CNS photo/Paul Haring)

The synod on the Pan-Amazonian region re-opened the question of whether women can be deacons in the church. But we can return to the beginning as we contemplate the future. The New Testament not only gives us women deacons, but we know one of their names: Phoebe. This is her hour.

Because Jesus never refers to priests, deacons or ordination in any direct way, our discussion should take us to the earliest literature in the New Testament: the letters and ministerial practice of the Apostle Paul. In Romans 16:1-2, Paul states:

I commend to you our sister Phoebe, a deacon of the church at Cenchreae, so that you may welcome her in the Lord as is fitting for the saints, and help her in whatever she may require from you, for she has been a benefactor of many and of myself as well. [N.R.S.V.]

We learn a lot about Phoebe from these two short verses. She is from Cenchreae, a port city outside of Corinth. (Paul visits this city in Acts 18:18.) Paul “commends” her to the Roman church, which suggests that Phoebe delivered the letter to Rome for Paul. If the church in Rome had questions about what Paul wrote, she would have been on hand to answer them. Paul also calls her a “benefactor.” This indicates that she provided material wealth to support the church and Paul’s network.

But I have buried the lead. Paul also calls Phoebe, in Greek, a diakonos. The meaning of this word is at the crux of the current discussion over women deacons.

Paul calls Phoebe, in Greek, a diakonos. The meaning of this word is at the crux of the current discussion over women deacons.

I want to focus on how this word was understood in the New Testament period. To be sure, there is convincing evidence of women deacons after this time, as noted by Phyllis Zagano in America, but many of the arguments against women deacons begin with the apostolic period. We must get our starting point correct.

The New American Bible Revised Edition translates the word diakonos in Romans 16:1 as “minister.” In the New Revised Standard Version, Phoebe is called a “deacon.” Other translations use the word “servant.” So was Phoebe a servant, a minister or a deacon?

The word “diakonos” occurs frequently in the New Testament to refer to anyone who serves other people. For instance, in the story of the wedding at Cana in John 2, “diakonos” is used to designate the servants at the wedding feast. At some point in the New Testament period, however, the word took on extra significance and became an official title, from which we derive the word “deacon.” A few examples from Paul’s letters show that he used “diakonos” in a variety of ways.

In 1 Corinthians 3:5, Paul uses the word diakonos to refer to both himself and Apollos, another well-known early apostle: “What then is Apollos? What is Paul? Servants [diakonoi] through whom you came to believe, as the Lord assigned to each” (N.R.S.V). Paul uses the word here in a general way, to describe the character of their ministry as one of servitude.

Was Phoebe a servant, a minister or a deacon?

But in other places, Paul uses the word to refer to people with official standing in the church. For example, in Ephesians 6:21 he states: “So that you also may know how I am and what I am doing, Tychicus will tell you everything. He is a dear brother and a faithful minister [diakonos] in the Lord” (N.R.S.V.). Here, Paul recommends Tychicus to the Ephesian community as a sanctioned conduit of information, which suggests that diakonos is understood here as an official title.

Paul’s letter to the Philippians contains the strongest evidence that Paul can understand diakonos as an official and authoritative role in the church. He starts this letter by saying: “Paul and Timothy, servants of Christ Jesus, to all the saints in Christ Jesus who are in Philippi, with the bishops and deacons” (N.R.S.V.). Instead of “bishops and deacons,” the New American Bible translates this final phrase as “with the overseers and ministers.” The N.A.B. translators have decided in this case that the official title of “deacon” had not yet developed within the church. This decision, however, is not supported by the historical evidence. The fact that Paul uses the word at the start of his letter to the Philippians, alongside the word that can mean “bishop,” suggests that he has an official title in mind, even if it may not be precisely equivalent to “deacon” as we use the title today.

Translations matter and always involve interpretation, including historical context. But whether you translate the Greek word diakonos as “minister,” “deacon” or “servant” makes a significant difference as our church today looks for precedent.

Start with Paul, Not the Gospels

One of the ways the church has impeded the conversation about women deacons is by starting its discussion of the New Testament material with the Gospels. The argument finds something normative in Jesus choosing 12 male apostles. But this treats the New Testament in a way that is not strictly historical since Paul’s letters predate any of our four Gospels by 20 to 30 years. The Gospels were written toward the end of the first century, and their concerns reflect that time period as much as they reflect the period in which Jesus lived. As “Dei Verbum” states, the evangelists interpret Jesus’ life partly in light of “the situation of their churches.”

By interpreting Paul through the lens of the Gospels, the International Theological Commission in 2002 created an expectation that only men could be in certain positions of authority and ministry. The commission relegated Phoebe to a role of servitude, subordinate to the ministry of the apostles. The commission also ignored the role of another woman, Junia, whom Paul calls an apostle (Rom 16:7), a fact with which no church document on ordination has fully reckoned.

Translations that obfuscate Phoebe’s role while inflating those of men do a disservice by importing later church distinctions between men and women back into the New Testament period.

But if we treat the New Testament in a properly chronological way and start with Paul, the landscape for early Christian leadership gives us new insight. Again, at times, Paul uses the word deacon as an official title and applies it to Phoebe. There is no evidence in the ministry of Paul that women were barred from the role of deacon, nor is there evidence that the role of a woman deacon would have been different from that of a man. The grammatical use of the feminine version of deacon, “deaconess,” arises in the early church, after the New Testament period.

Later in the New Testament period, the church developed clear guidelines for the office of deacon. The first letter to Timothy gives specific qualifications: They are to be serious, sober, not greedy and have a clear conscience. The text then says, “women, similarly, should be dignified, not slanderers, but temperate and faithful in everything” (1 Tim 3:11 N.A.B.R.E.). The plain sense of this text suggests that women were deacons and executed ecclesiastical functions.

If Paul understood Phoebe as a deacon, she is far from an anomaly; she was more likely the vanguard of a broader phenomenon. While it is true that we do not know her precise functions or the sacramental understanding of them, this ambiguity is also true of men of the time. Translations that obfuscate Phoebe’s role while inflating those of men do modern Christians a disservice by importing later church distinctions between men and women back into the New Testament period.

Could there be a movement to revive the idea of women in the permanent diaconate today? Pope Francis’ repeated comments about a “closed door” apply only to women as priests. In 2016, he convened a commission on the possibility of women as deacons. This 12-member group included academics and church leaders, most notably Ms. Zagano. That commission ended in a stalemate, but the Pan-Amazonian synod put new wind in the sails for this idea because of the need for sacramental ministers in the Amazonian region.

The justification for women deacons, however, can be based on more than necessity. Paul’s ministry provides our earliest window into the practice of the fledgling church, one in which men and women seem to have shared equally in the role of deacon. We can claim Deacon Phoebe and her ministry as norm-making precedent. She would not have it any other way. 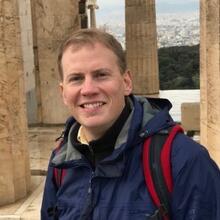 Micah D. Kiel is a professor in the theology department at St. Ambrose University in Davenport, Iowa. This essay draws on material from his book Reading the Bible in the Age of Francis (Wipf & Stock).