A boy dying of cancer wanted to be buried near Pope Francis. His wish came true. 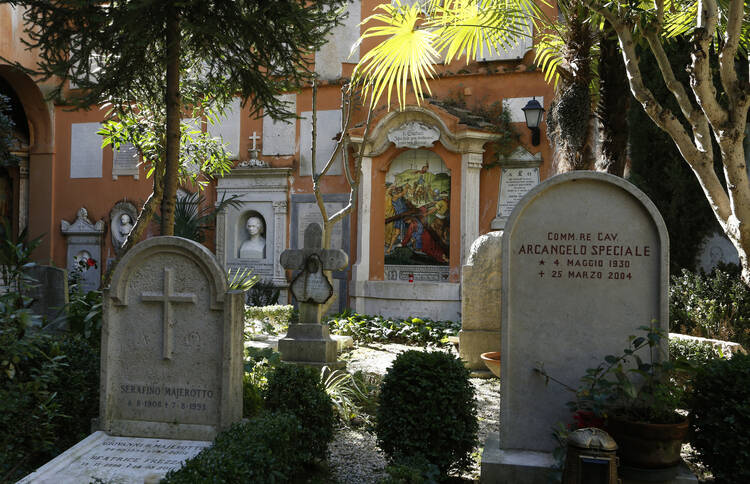 The Teutonic cemetery at the Vatican is seen in this 2015 file photo. (CNS photo/Paul Haring)

Pope Francis granted the last wish of an 11-year-old Argentinian boy, called Tomasito, who before dying from cancer asked to be buried near the pope in the Vatican.

In 2015, Francis had Tomasito laid to rest in the Teutonic cemetery in the Vatican, close to the place where St. Peter was executed, next to the famous basilica and less than a 5-minute-walk from Santa Marta, the Vatican guest house where he lives.

This moving story was first reported today by Domenico Agasso, the Vatican correspondent for La Stampa. He wrote that Francis first got to know the boy when he was archbishop of Buenos Aires because the secretary of his auxiliary-bishop was an aunt of the boy. Mr. Agasso said that in 2004 doctors that diagnosed that Tomasito had cancer—a tumor of the kidney—when he was just two years old.

In 2015, Francis had Tomasito laid to rest in the Teutonic cemetery in the Vatican, close to the place where St. Peter was executed.

Cardinal Bergoglio was informed and met the child and young boy on a number of occasions. According to La Stampa, Cardinal Bergoglio was “deeply moved” by the exemplary way he faced his illness as he grew older and by his faith in God. Tomasito bore his sufferings with “great courage” and “prepared for death,” Francis recalled, and with his faith “converted his parents, who then got married in church. He did a miracle.”

Further details on this story were added by Elisabetta Piquè (my wife), correspondent for the Argentine daily, La Nacion, after speaking to Bishop Joaquin Mariano Sucunza, the auxiliary bishop of Buenos Aires, who accompanied the boy on his final journey. “Tomasito was a very special boy, very intuitive, who kept going forward [after the early diagnosis] until the illness exploded in his adolescence,” the bishop recalled.

Francis told La Stampa that when it was clear that the end was near, Tomasito’s parents asked him if he had a last wish, and he responded, “I wish to be buried near Pope Francis in the Vatican!”

Pope Francis, at site of first nativity scene, issues letter on the importance of the crèche
Gerard O’Connell

The boy’s ashes were brought in a box to the Vatican and buried in the Teutonic cemetery where normally only people of Germanic and Flemish origin living in Rome are interred.

Today, Tomasito rests under a simple tombstone in the small cemetery inside the Vatican. His mother and his younger sister have come to the Vatican to pray there, Bishop Sucunza told La Nacion.

“The only thing that he wanted was to be near me, to be buried in the Vatican,” Pope Francis recalled. He made sure the boy’s wish was granted.