In the incarnation, the impossible became possible 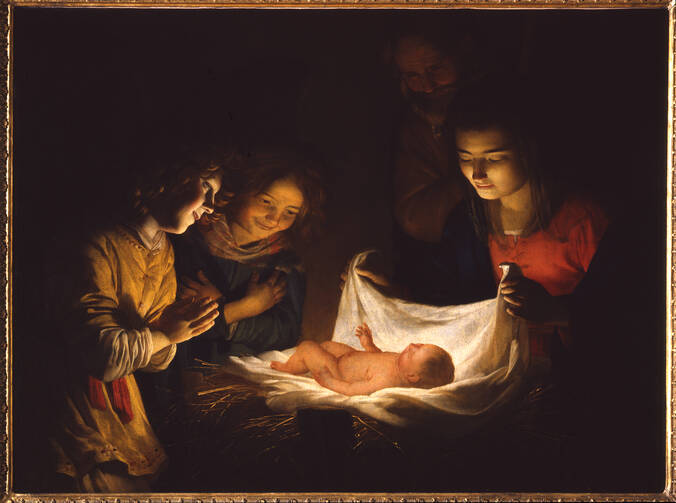 The Adoration of the Child is depicted in this 17th-century painting by Dutch artist Gerard van Honthorst. Christmas is celebrated Dec. 25. (CNS photo/Uffizi Gallery in Florence)

Sigmund Freud supposedly said that the Irish are impervious to psychoanalysis, though there is little evidence that he ever actually made such a claim. After all, if Freud had said that, then why were the previous editors in chief of America, many of whom were of Irish descent, so fascinated by Freudian thought, as Adam A. J. Deville recounts in this issue? I suspect one reason for the stereotype is that we Irish do have a habit of deflecting uncomfortable realities with humor, which can be occasionally maddening.

It might interest you to know that I underwent intense psychological testing as part of my application process for the Society of Jesus. It might even surprise you to know that I passed. And after I had passed my tests and was admitted to the Jesuits, my superiors sent me back to review a detailed summary of the findings with the psychiatrist.

“Basically, you are a psychologically healthy person,” he said. “But when you experience something uncomfortable, you often make a joke rather than confront your pain directly.”

“Really?” I said, laughing. “How much have the Jesuits paid you to tell me that? Any guy I’ve ever sat next to in a pub could’ve told them that for free.”

Fair enough. But while I was glad to learn that I am basically sane, the testing experience caused me to wonder, as the character of Cervantes does in the musical “Man of La Mancha,” just where, precisely, madness lies, at least in the philosophical sense. “When life itself seems lunatic,” Cervantes says, “perhaps to be too practical is madness. To seek treasure where there is only trash. Too much sanity may be madness!”

The things I hold most dear, the beliefs that keep me sane in a world gone mad, have everything to do with Christmas.

Which brings me to the reason for the season. The things I hold most dear, the beliefs that keep me sane in a world gone mad, have everything to do with Christmas. Yet, strangely enough, in another time and place, one unconditioned by centuries of Christian cultural tradition, those same beliefs would constitute prima facie evidence of my clinical derangement. Suppose I had been one of those shepherds keeping watch by night. And then suppose that I spent the next few years going around first-century Palestine telling people that I had seen the newborn Messiah in something like a stable in Bethlehem. And that his mother was a frightened but fearless teenage girl and that his father was an aging carpenter who talked to God in dreams. His earthly father, that is. For his real father, I’d tell them, was God—you know, the one who created the world and holds it in being even now? That God.

All that would have sounded so bizarre that people might have been justified in thinking I was not in my right mind. They might even have banished me to the other side, along with the Gerasene demoniac. Or worse. And yet the credibility of the Christian faith rests on such bizarre claims. The Gospel is filled with them: rich is poor, death is life, the last is first. Such things seem to defy logic—but only according to a human standard. For what we are ultimately talking about here is the logic of the creator, not the creature, which is why the power of these beliefs lies in their seemingly in-credible character.

The Scandal of Knock: God can transform any nowhere into somewhere
Matt Malone, S.J.

The pilgrim believes you can find God in all things—even beyond the horizon
Matt Malone, S.J.

That is what Christmas is actually about—the world gone mad, in a good way, in the best possible way, a way none of us could have ever imagined. To borrow a phrase from a friend, the incarnation is that moment when God enacts the comedy of our redemption amid the tragedy of the world. In that sense, it is a joke—not something that helps us avoid our pain but an event that allows us to enter into it anew, without fear. The incarnation helps us make sense of it all, and, more important, it gives us the hope we need to survive. God’s descent into human life charges our pain with meaning and gives it a transformative power that would otherwise certainly elude us. In the incarnation, the impossible became possible, became real, our reality.

The incarnation helps us make sense of it all, and, more important, it gives us the hope we need to survive.

“Christmas and the star and the three kings and the ox and the ass,” Charles says to Sebastian in the novel Brideshead Revisited. “You can’t believe things because they’re a lovely idea.”

Sebastian gets the joke. He intuits that the sheer craziness of it all is actually what makes it worth believing, even what makes faith credible. And that faith gives him—us—eyes with which to see the world as it is and to reimagine its possibilities.

Thus Christmas reminds us, as Cervantes says at the close of his monologue, that “maddest of all is to see life only as it is and not as it should be.”