The Scandal of Knock: God can transform any nowhere into somewhere 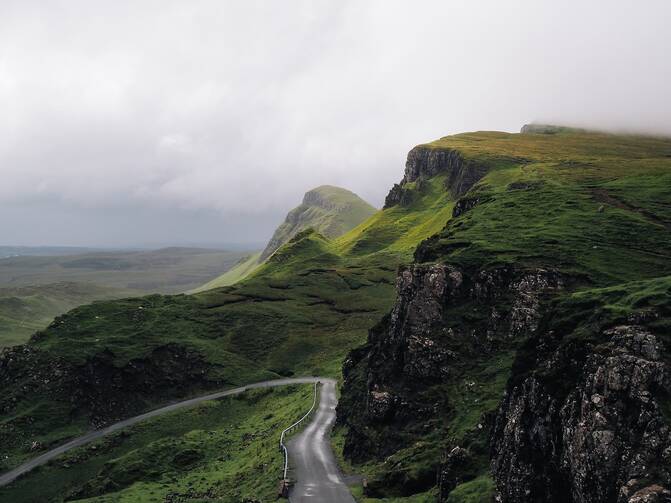 Photo by Andrew Ridley on Unsplash

A few readers will be familiar with the corner of Third Avenue and East 70th Street in New York City. I think there’s a Men’s Wearhouse clothing store there, as well as a yogurt place. I myself have crossed this intersection perhaps a dozen times in my life. But most of us will not have been there and, even if we have, we probably don’t remember much about it, mainly because to all appearances, little that is great or important has ever happened there.

The recent America Media pilgrimage to Knock, Ireland, or a pilgrimage to any Marian shrine, in fact, should serve as a warning against assuming there is such a place as “nowhere,” though you’d be forgiven for thinking that Knock is in the middle of nowhere. A tiny village in the west of Ireland, it would be completely unknown except for the claim that Our Lady appeared there in 1879. There were several witnesses to the silent apparition, so called because it was wordless. While the apparition brought great comfort to the townspeople, Our Lady didn’t speak in Knock, which, as our guide explained, makes some sense: When Mary appeared elsewhere she asked people to pray and to fast. The people of Knock were already praying, and they were literally starving. Mary clearly knew whom she was visiting.

Knock makes sense. I mean, Nazareth was a backwater, Bethlehem some provincial outpost, Lourdes a village in the Pyrenees far from Paris. Our Lady likes these kinds of places, places the world knows nothing of or has entirely forgotten or has overlooked. I therefore like to think of Mary as Our Lady of Somewhere because she has a habit, now in its second millennium, of turning nowhere into somewhere.

I like to think of Mary as Our Lady of Somewhere because she has a habit, now in its second millennium, of turning nowhere into somewhere.

To wit: 213 East 70th Street, near the corner of Third Avenue. According to a New York Times story, in 1937, there was a home for the indigent at that address, which was staffed by women religious. Among its residents was a man named John Curry. He had a single room there, and he paid his rent by helping serve at the daily Masses for the sisters. After a while, one of the sisters learned that John was from Mayo and asked if he had ever heard of Knock? “Yes,” he answered. She then asked whether he knew the John Curry from Knock. “Sister, the John Curry from Knock is the John Curry who serves Mass for you in this home every morning.”

This John Curry of 213 East 70th Street was the last surviving witness to the apparition at Knock. After emigrating to the United States, Curry spent most of his life working as a hospital orderly. But the defining moment of his life, as he told the two ecclesial commissions that investigated the events at Knock, was that night when, as a boy, he had stood looking at the south side of his church in the pouring rain with two dozen others. “I seen the Blessed Virgin,” he said, “St. Joseph and St. John the Evangelist on the gable of the church.”

Thus, 213 East 70th Street is not nowhere, but somewhere—made somewhere in the same way the grace of God turned all those other nowheres into somewheres. And if grace can transform a nowhere into a somewhere, then how much more can grace make a nobody a somebody by revealing, in places like Nazareth and Lourdes and Knock, that, in fact everybody is somebody simply because they are created in the image of the someone who is everywhere. Another way of putting this: A grace received is not the end of the story, but its beginning.

Everybody is somebody simply because they are created in the image of the someone who is everywhere.

Which brings us to the end of the beginning of John Curry’s story. When he died in 1943, reported The New York Times, the sisters buried him in a grave somewhere in Queens. He remained there until the present archbishop of New York, Cardinal Timothy Dolan, made his own pilgrimage to Knock. There he learned of the story of John Curry and that he was buried in New York City.

Why do we stay in the church?
Matt Malone, S.J.

So Cardinal Dolan put his people on the case, and they were able to locate John Curry’s body. They disinterred him and re-buried him in the cemetery next to Old Saint Patrick’s on the Lower East Side of New York, itself a “nowhere” that was made a somewhere by the grace of God and countless pilgrims. Two years ago, Cardinal Dolan presided at a memorial Mass for John Curry, an orderly who had died in relative obscurity.

But make no mistake. It wasn’t Tim Dolan who made all that happen. It was God, through the intercession of Our Lady of Knock, who made it happen, the same power that makes every nowhere somewhere and every nobody somebody. We might ask ourselves: What’s the nowhere in my life that I’d like to be somewhere? And then pray for that grace, wherever we happen to be right now. I can think of nowhere better.