Pope Francis: Rise in populism due to lack of listening and dialogue

Pope Francis: Rise in populism due to lack of listening and dialogue 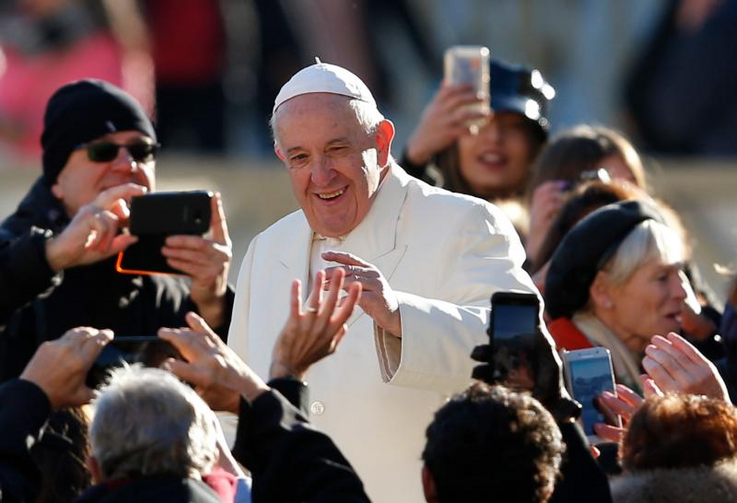 Pope Francis greets the crowd during his general audience in St. Peter's Square at the Vatican Dec. 4, 2019. (CNS photo/Paul Haring)

VATICAN CITY (CNS) -- Ignoring the reality lived by men and women today has caused a resurgence of old ideologies, such as populism, that inevitably do more harm than good, Pope Francis said.

Speaking off-the-cuff with staff and members of the Italian Jesuit magazine, "Aggiornamenti Sociali" ("Social Updates") Dec. 6, the pope said that prejudices, certain "schools of thought and positions taken do so much harm" in the world.

"Today for example in Europe, we are experiencing the prejudice of populism, countries who close in on themselves and turn to ideologies," he said. "But not just new ideologies -- there are a few -- but to the old ones, the old ideologies that created the Second World War."

Founded in 1950, "Aggiornamenti Sociali" offers "information but above all formation," as well as "criteria and instruments to confront today's most debated issues and participate in social life in a conscious way," according to the Jesuit magazine's website.

The pope told the staff and writers he had prepared to read an eight-page speech, but he feared that "after the third page, there will be few left who will listen."

In his off-the-cuff remarks, the pope highlighted the importance of listening, saying it is the "fundamental attitude of every person who wants to do something for others."

"Listen to situations, listen to problems, openly, without prejudices," he said. "Because there is a way of listening that is 'Yes, yes, I understand, yes, yes,' and it reduces them, a reductionism to my categories. And this cannot be."

"It is a complex that makes us substitute God the creator: we take the situations in our own hands and work," he continued. "Reality is what I want it to be; we place filters. But reality is another thing, reality is sovereign. Whether we like it or not, it is sovereign. And I must dialogue with reality."

Dialogue, he added, is an important step in confronting today's societal ills. Christians are not called "to impose paths of development or solutions to problems," but instead, to initiate "a dialogue with that reality starting from the values of the Gospel, from the things Jesus has taught us, without dogmatically imposing but with dialogue and discernment."

"If you start from preconceptions or preestablished positions, from dogmatic pre-decisions, you will never, never be able to give a message. The message must come from the Lord through us. We are Christians and the Lord speaks to us through reality, through prayer and discernment," he said.

In his prepared remarks, which were given to those present, the pope encouraged the magazine's writers to continue "to give space to the perspective of those who are 'discarded'" by today's society.

"Continue to be with them, listen to them, accompany them so that their voices may be the ones who speak," the pope said. "Even those who research and reflect on social questions are called to have the heart of a shepherd with the smell of the sheep."

He also reminded the Jesuit magazine's editorial staff of its responsibility to allow for dialogue and different points of view while avoiding "the temptation of abstraction, of limiting yourselves to the level of ideas while forgetting the concreteness of doing and walking together."

"Serious intellectual research is also a journey made together, especially when dealing with cutting-edge issues," he said. The staff must allow "for different perspectives and disciplines to interact" and should "promote relationships of respect and friendship between those involved so that they may discover how encountering one another enriches everyone."