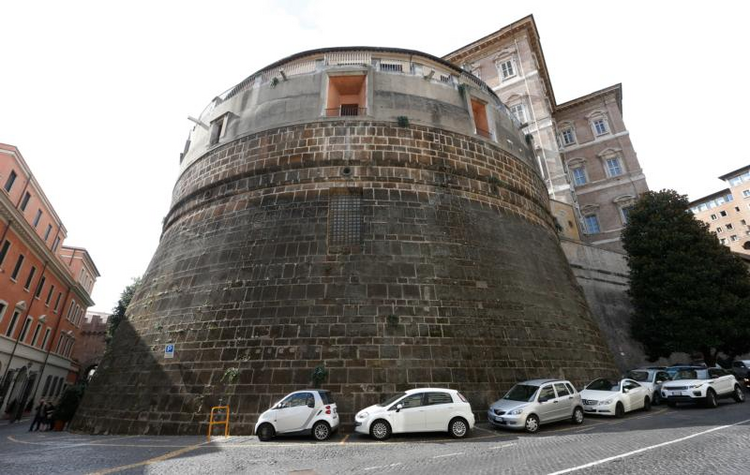 The tower of the Institute for the Works of Religion, often referred to as the Vatican bank, is pictured Oct. 2, 2019. (CNS photo/Paul Haring)

The Vatican said in a statement Nov. 27 that the pope named Carmelo Barbagallo as the new head of the Financial Intelligence Authority, known by the Italian acronym AIF.

In an interview with Vatican News published shortly after the announcement, Barbagallo said he was honored by the appointment and "aware of the full weight of the moral and professional responsibility it carries."

"In carrying out my service of responsibility in leading the AIF, I will work to bring all my experience accumulated in 40 years working at the Bank of Italy, as an inspector, as head of vigilance of the Italian banking and financial sector and in the context of the supervision of the European banking system," he said.

He also emphasized AIF's important role in upholding the "fundamental values of fairness and transparency of all financial movements."

"I intend to reassure the international system of financial information that all cooperation will be given in full respect of the best international standards," he said. "I will be at work already today to ensure continuity in the work of the AIF in pursuing its important institutional objectives."

The Vatican said Nov. 18 the pope would name a successor succeed AIF's former president, Rene Bruelhart, following the end of his five-year term. However, in an interview with Reuters after the announcement, Bruelhart said, "I resigned."

The end of Bruelhart's time as head of the Vatican's financial watchdog agency came over a month after Vatican police conducted a raid on offices in the Secretariat of State and AIF.

On Oct. 2, the day after the raid, the Italian magazine L'Espresso published what it said was an internal notice from the Vatican police barring certain individuals from entering Vatican City State and alleged that the raid was part of a Vatican investigation into how the Secretariat of State used $200 million to finance a property development project in London's Chelsea district in 2014.

During his return flight to Rome Nov. 26 after a weeklong trip to Thailand and Japan, the pope told reporters that while questions about the Vatican's finances and the London development project were serious, investigations conducted by Vatican authorities are proof that reform procedures instituted by Pope Benedict XVI are working.

"This is the first time the lids have been taken off the pots by someone inside and not outside" the Vatican, the pope said.

Regarding the London deal, the pope said that "it was the internal auditor general who said, 'Look, here is something that doesn't add up.' He came to me."

When the auditor asked the pope what he should do, the pope said he told him to go to the Vatican prosecutor with the information.

"For that, I am content," he said, "because it shows the Vatican administration has the resources" to report and investigate suspicious activity.