How Ross Douthat is calling Catholic conservatives to humility 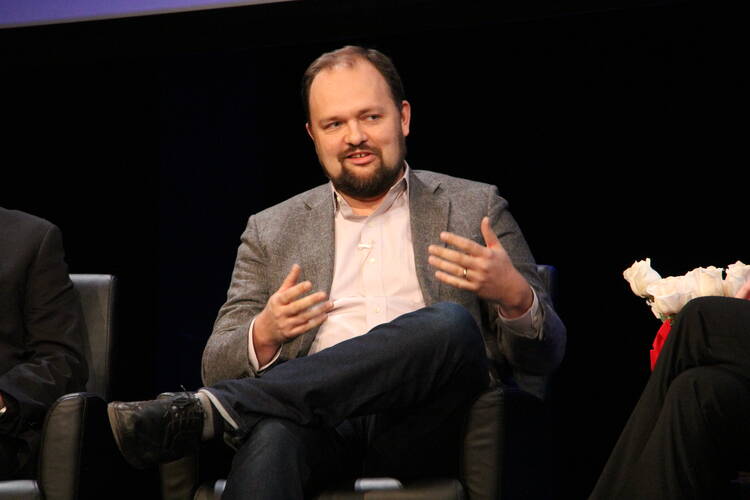 Ross Douthat is up to something. He has been subversive in recent writings. He has offered a critique of Pope Francis’ papacy that has attracted considerable attention. Less noted, however, has been his criticism of Catholicism as practiced and understood by people aligned with U.S. conservatism. It is a critique, however, that many of his critics should get behind.

That is because Douthat is calling conservatives to humility.

Recent Douthat columns have been good examples of this call. In two Nov. 9 pieces on “conservative Catholicism,” Mr. Douthat argues that this papacy has revealed the weaknesses in the conservative Catholicism he wants to shore up. [It is America’seditorial policy to refrain from describing fellow Catholic Christians as “conservative” or “liberal” in a ecclesiastical context, since these terms can prioritize political factionalism over ecclesial communion. However, since they are the terms of Mr. Douthat’s analysis, this piece uses them as a starting point for discussion.] Conservatives, Mr. Douthat writes, “believed that John Paul II had permanently settled debates over celibacy, divorce, intercommunion and female ordination.” Pope Francis has opened up many of those debates.

Many Catholics are unhappy with these changes, and Mr. Douthat joins their chorus. Indeed, while some panned his interview with Cardinal Burke, Mr. Douthat thinks his interview confirms the “tenuous position” of the cardinal and his supporters. As Mr. Douthat says, conservatives are in the difficult position of “a Catholicism that is orthodox against the pope.” This apparent conflict between tradition and papal authority, he argues, forces conservatives to choose between tradition at the cost of calling the pope schismatic and support of the pope at the cost of an unprincipled ultramontanism.

As a result, conservatives have encountered a crisis of authority. As Mr. Douthat says, “I don’t think we’re any closer to a definite answer to what happens to conservative Catholicism when it no longer seems to have the papacy on its side.”

And this is the simple lesson that Mr. Douthat wants conservatives to take away from this history: the “consensus” they thought they had was far more fragile and reversible than they realized.

Douthat has written that “I don’t think we’re any closer to a definite answer to what happens to conservative Catholicism when it no longer seems to have the papacy on its side.”

It is helpful to see these two pieces as part of a project that includes his 2015 Erasmus talk for First Things and his 2018 book To Change the Church. Mr. Douthat’s target in these pieces is what in his preface To Change the Church he calls “inevitabilism”: the belief that one’s side will win and the other side will lose. Many Catholics, Mr. Douthat argues, believe that Catholic history inevitably has to bend their way.

There are several dimensions to this idea, but in rejecting it, Mr. Douthat is trying to accomplish several things.

First, as we have already seen, Mr. Douthat is calling out “conservative Catholic” triumphalism. He hammers home the point that the church changes far more often than many conservatives are willing to admit, and conservatives need to recognize that support for their ideas, including support from ecclesial leadership, will ebb and flow.

Second, Douthat is calling conservatives to an intellectual project: to return to their principles and not assume that their project will win simply because the right leaders are in charge. Invoking now-Saint John Henry Newman, Douthat argues of conservatives that “the church has changed in the past more than they are often ready to admit,” and of traditionalists that “the church has needed to change more than they seem ready to allow.” Douthat criticizes conservative Catholicism as a “preservationist enterprise more than a dynamic one.”

The past has to be a resource, yes, but only if we recognize that it includes failures as well as success.

Here the parallel to U.S. political conservatives in general is strong. What conservative Catholicism looks like after Saint John Paul II or Pope Benedict XVI is in some respects similar to the question U.S. conservatives are asking in the age of Trump, long after Reagan or Bush 43. The past has to be a resource, yes, but only if we recognize that it includes failures as well as success.

Third, Mr. Douthat is calling conservatives to a moral project. The problem of inevitabilism is not only or even primarily intellectual. “Where conservative Catholics have the power to resist what seem like false ideas or disastrous innovations,” Mr. Douthat writes, “they must do so.” But for Mr. Douthat part of abandoning triumphalism is recognizing “the insufficiency of human strategies and wisdom,” a humility about human striving that characterizes conservatism of the Burkean variety. Conservatives need to regain such a set of virtues if they are going to slough off their triumphalism, embracing the present “as a possible purgation… and a reason to embrace T.S. Eliot’s poetic admonition: There is yet faith, but the faith and the hope and the love are all in the waiting.”

This waiting gives conservatives a vision of a church and a salvation history bigger than themselves. Catholics today are often divided as to whether to emphasize the human or divine nature of the Church. Mr. Douthat is speaking primarily to the latter group. If they are right that the church will endure all because it is divine, perhaps they can start by remembering that the church will outlive even their own agendas.

At root, this is one of the best things Mr. Douthat is saying: It is dangerous and wrong to confuse one’s own agenda with that of the church—or even more, with God’s agenda for the church.

It is dangerous and wrong to confuse one’s own agenda with that of the church—or even more, with God’s agenda for the church.

Finally, Mr. Douthat is implicitly calling out the triumphalism of non-conservative Catholics. There is plenty of “inevitabilism” throughout the church, including from those who support Pope Francis in unhelpful ways. For some Catholics, the church has been “on the wrong side of religious history” for decades, if not centuries. After the perceived reversals of recent papacies, they view this papacy as a vindication of their long-suffering hope “that a kind of liberal Christianity is the destination to which Catholicism will sooner or later arrive.”

But if all Catholics think this way, then we will erode still further our sense of community through baptism into the Body of Christ. Rather, we will see the church as yet another arena in which one must assert one’s will over one’s enemies. Service and power in the church would be understood primarily as the balance of power between one’s friends and enemies. Much of church life would be reduced to a litmus test for which Catholic tribe one belongs to.

Instead of being a leaven to the world, we would become just another example of its hard-hearted conflict and loveless rancor.

I disagree with some of Mr. Douthat’s argument. But I support unreservedly his call to conservatives to embrace humility. Conservatism ultimately counsels receptivity over activity because it thinks goodness is something given to humans, not made by them.

As the Eliot quotation above suggests, the deeper challenge posed by Mr. Douthat is not humility, but hope. The church will indeed win in the end. Inevitabilism gets that much right. But that victory comes not through human efforts, but on the cross. And the battle is already won.

Bill McCormick, S.J., is a visiting assistant professor at Saint Louis University in the departments of political science and philosophy. He is an editor and writer for The Jesuit Post.

@BMcCSJ
Show Comments ()
Join the conversation: Login or create an account
Before you can comment, you need to update your profile to include your first and last name, as required in our comments policy. Then reload this page and you'll be set up for commenting. Update your profile
Show Comments ()
Comments are automatically closed two weeks after an article's initial publication. See our comments policy for more.