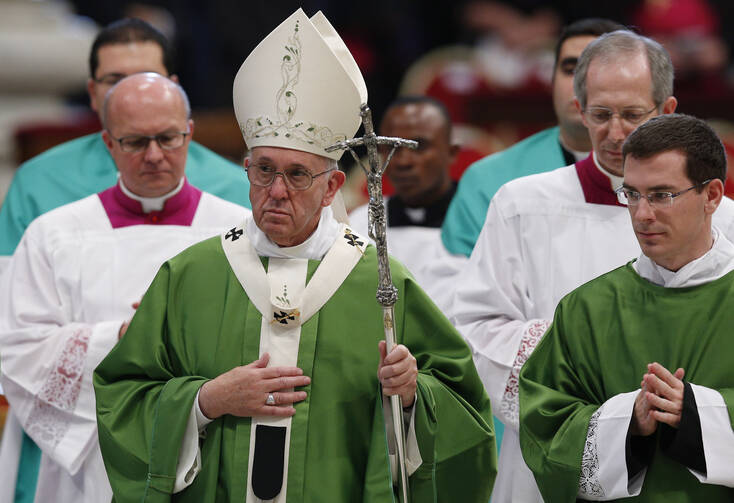 Depending on who you have on your Facebook feed, you might have seen a post from University of St. Thomas theologian Massimo Faggioli yesterday about the letter he and a number of other theologians have sent to The New York Times in response to columnist Ross Douthat’s Oct. 18 piece, “The Plot to Change Catholicism.”

Here is that letter in full:

On Sunday, October 18, the Times published Ross Douthat’s piece “The Plot to Change Catholicism.” Aside from the fact that Mr. Douthat has no professional qualifications for writing on the subject, the problem with his article and other recent statements is his view of Catholicism as unapologetically subject to a politically partisan narrative that has very little to do with what Catholicism really is.  Moreover, accusing other members of the Catholic church of heresy, sometimes subtly, sometimes openly, is serious business that can have serious consequences for those so accused. This is not what we expect of The New York Times.

If you haven’t read Mr. Douthat’s piece, it’s worth a look—just keep a nitroglycerin pill handy, because it is a shocker, depicting the pope as a figure of “ostentatious humility” (naughty pope, rubbing his simplicity in our overfed faces) who is attempting to change that which Mr. Douthat says “the pope is supposed to have no power to change,” namely “Catholic doctrine.”

Now, if you find yourself wondering, since when is the pope (or a synod, for that matter) unable to call for a change in church doctrine, well, that's a good question. The pope and the synod can in fact change doctrine, but not dogma.

Put simply, dogma is the stuff you have to accept if you’re going to call yourself Catholic. It's the Creed we recite every Sunday—things like the incarnation, the Trinity and the communion of the saints that we hold as undeniable tenets of our faith—plus any pronouncements that popes have invoked infallibly, which has happened almost never. The Assumption of Mary was such a pronouncement; so is the Immaculate Conception.

Doctrine, as the term is most commonly used (including here by Mr. Douthat), refers to the church's moral teachings, which develop over time as new questions and also new insights arise. Doctrinal teachings—of which the church’s stance regarding divorce is one—do not change often or easily. They can even be mistaken for dogma by the amount of resistance made at the suggestion of any alteration. But they are certainly capable of development. In fact that was one whole point of the synod—to reflect on the various questions of family today, in light of our tradition and the lived experience of Catholics, and consider what if any comments, including potentially changes in practice, should be offered.

It is indeed an embarrassment that The New York Times would publish a piece that is so sloppy (and just plain wrong) in its understanding of these basic distinctions.

If you read the piece, you may also find it a wee bit surreal. Mr. Douthat’s proposition that the pope is engaged in a “plot to change Catholicism” is painted in the courtly, power-hungry intrigues of another era. “A Jesuit pope is effectively at war with his own Congregation for the Doctrine of the Faith, the erstwhile Inquisition,” he writes.

But in fact this pope is not attempting to seize power for himself or overthrow some item of Catholic dogma. He’s just pushing for a greater pastoral care for families. So when Mr. Douthat writes, “Speaking as a Catholic, I expect the plot to ultimately fail; where the pope and the historic faith seem to be in tension, my bet is on the faith,” what he’s saying is not, as it sounds, “I’m betting that the pope will be prevented from changing the fundamental tenets of our faith,” but rather “I’m betting the bishops will continue to prevent divorced Catholics from being able to go to Communion.”

(Because how dare the leaders of a faith that believes in a god who spent his time with sinners and the outcast consider such a move. What are we, Unitarians?)

Certainly there’s plenty of ongoing brouhaha to cover regarding the synod, and oodles of inter-episcopal conflict, which is both surprising and fascinating. Have we ever seen bishops uncork like this?

Personally, I think it’s good news. It’s uncomfortable, and it risks divisiveness, but better this church than the one in which whole groups of people are intimidated into silence.

But either way, we’re not talking about the fundamentals of Catholicism being secretly changed in the back rooms of soup kitchens and homeless shelters while our supposed “look how poor I am" pope gives away his furniture. We will not go to church anytime soon and discover we now believe not in a Trinity but an unlikely buddy cop pair of divinities who share a wacky pet dove.

But we may find that some of our peers who come to Mass every Sunday but never go to Communion are finally welcomed to the table. And whether he personally agrees with that possibility or not, you’d expect a columnist for The New York Times (particularly one who is a Catholic) to understand the difference.

Thank goodness we have theologians like John O’Malley, S.J., Katarina Schuth and Massimo Faggioli to speak to that truth.