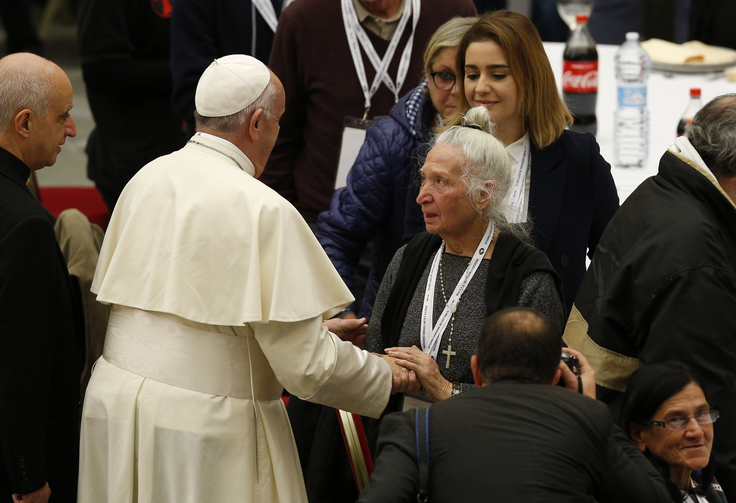 Pope Francis greets a woman as he arrives to eat lunch with the poor in the Paul VI Audience Hall as he marks World Day of the Poor at the Vatican on Nov. 17, 2019. (CNS photo/Paul Haring)

“Wearing the label ‘Christian’ or ‘Catholic’ is not enough to belong to Jesus. We need to speak the same language as Jesus: that of love,” Pope Francis said as he celebrated the third World Day of the Poor by saying Mass in St. Peter’s Basilica this Sunday morning. The mass was attended by many poor people, and Pope Francis had lunch with more than 1,500 of them afterward in the Paul VI Audience Hall.

Pope Francis started this tradition in 2016 at the end of the Extraordinary Jubilee Year of Mercy, when he decreed that the World Day of the Poor should be celebrated throughout the Catholic Church on the penultimate Sunday of Ordinary Time in his apostolic decree “Misericordia et Misera.” He celebrated it for the first time in November 2017, declaring “Let us love not with words but with deeds.”

In his homily at Mass today, Francis highlighted how love for the poor is central to following Jesus but so often in contradiction with what the world considers important. Commenting on the Gospel that recounts how Jesus “astounded his contemporaries and us” by prophesying the total destruction of “the magnificent temple in Jerusalem,” Francis urged Christians to put things into perspective.

Pope Francis: "We go our way in haste, without worrying that gaps are increasing, that the greed of a few is adding to the poverty of many others.”

“Jesus tells us that almost everything will pass away,” he said, and“explains that what will collapse and pass away are the penultimate things, not the ultimate ones: the temple, not God; kingdoms and human events, not humanity itself.” In our world, Francis remarked, “the penultimate things, which often appear definitive but are not,” such as earthquakes and wars, “are front page news” but “the Lord puts them on the second page.”

Pope Francis told the 7,000 people in the basilica, including 20 cardinals and 30 bishops, that “to help us realize what really counts in life, Jesus warns us about two temptations.” The first, he said, is “the temptation of haste, of the ‘right now’.” Jesus tells us that “we must not follow the alarmists who fuel fear of others and of the future, for fear paralyzes the heart and mind.” Instead, he said, “we often let ourselves be seduced by a frantic desire to know everything right now, by the itch of curiosity, by the latest sensational or scandalous news, by lurid stories, by the screaming of those who shout loudest and angriest, by those who tell us it is ‘now or never’.”

Francis declared that “this haste, this everything right now, does not come from God. If we get worked up about the right now, we forget what remains forever: we follow the passing clouds and lose sight of the sky.” Indeed, “drawn by the latest outcry, we no longer find time for God or for our brother and sister living next door.” This is especially true in today’s world, where “in the frenzy of running, of achieving everything right now, anyone left behind is viewed as a nuisance and considered disposable.” Drawing attention to the “many elderly, unborn, disabled and poor persons are considered useless,” Francis said, “we go our way in haste, without worrying that gaps are increasing, that the greed of a few is adding to the poverty of many others.”

He continued hat Jesus proposes “perseverance” as “an antidote to haste.” Francis explained that “perseverance entails moving forward each day with our eyes fixed on what does not pass away: the Lord and our neighbor.”

Pope Francis: "Do I, a Christian, have at least one poor person as a friend?”

Pope Francis then turned to the second temptation that Jesus warned his followers against: self-centeredness. Christians “are not concerned with the me but with the you,” he said. “Christians do not follow the siren song of their whims, but rather the call of love, the voice of Jesus.” He reminded believers worldwide that “wearing the label ‘Christian’ or ‘Catholic’ is not enough to belong to Jesus. We need to speak the same language as Jesus: that of love, the language of ‘the you’. Those who speak the language of Jesus are not the ones who say I, but rather the ones who step out of themselves.”

He reminded them that Jesus calls his followers to a “genuine love,” “to give to those who cannot repay us, to serve others without seeking anything in return.” He suggested that Christians ask themselves: “Do I help someone who has nothing to give me in return? Do I, a Christian, have at least one poor person as a friend?”

Priests Urged To Preach on Poverty
From AP, CNS, RNS, Staff and other sources

Francis noted that that “the poor are valuable in the eyes of God because they do not speak the language of the self: they do not support themselves on their own, by their own strength; they need someone to take them by the hand. The poor remind us how we should live the Gospel: like beggars reaching out to God.”

“Instead of feeling annoyed when they knock on our doors, let us welcome their cry for help as a summons to go out of ourselves, to welcome them with God’s own loving gaze,” he preached. “How beautiful it would be if the poor could occupy in our hearts the place they have in the heart of God! Standing with the poor, serving the poor, we see things as Jesus does; we see what remains and what passes away.”

“The poor person who begs for my love leads me straight to God. The poor facilitate our access to heaven: this is why the sense of the faith of God’s people has viewed them as the gatekeepers of heaven. Even now, they are our treasure, the treasure of the church.”