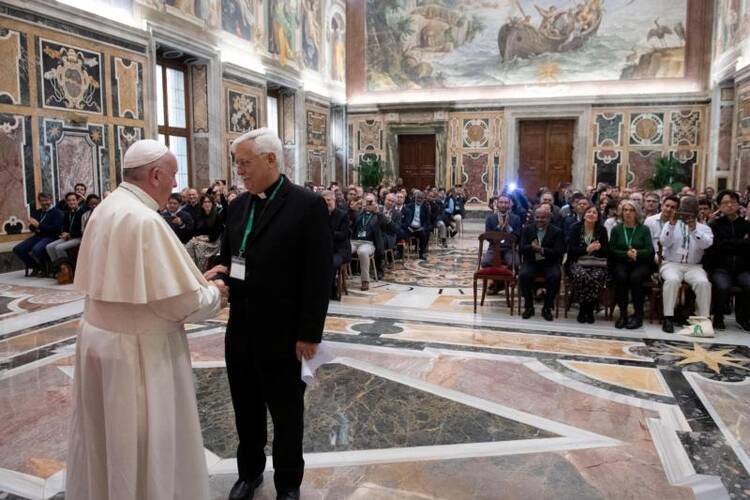 Pope Francis greets Father Arturo Sosa, S.J., Jesuit superior general, at a meeting with members of the Social Justice and Ecology Secretariat of the Society of Jesus in the Vatican's Clementine Hall Nov. 7, 2019. (CNS photo/Vatican Media)

Greeting more than 200 Jesuits and lay men and women “companions” at the Vatican’s apostolic palace on Nov. 7, Pope Francis said: “The Society of Jesus, from the beginning, was called to the service of the poor, a vocation that St. Ignatius incorporated into the Formula of 1550.

“That original Ignatian tradition has come down to our days,” he told them on the penultimate day of their celebration of the 50th anniversary of the Secretariat for Social Justice and Ecology.

Speaking to this audience in Spanish, the pope said Pedro Arrupe, S.J., sought “to strengthen” that tradition based on his own “experience of contact with human suffering.” Father Arrupe was the superior general of the Jesuits from 1965 until 1983 and the founder of the S.J.E.S.

Pope Francis recalled that Father Arrupe once wrote, “I saw God so close to those who suffer, to those who cry, to those who are shipwrecked on this life of abandonment, that it sparked in me the burning desire to imitate him in this voluntary closeness to the discarded of the world, which society despises.”

Francis, who had met Father Arrupe once in Argentina in the late 1960s, confided that he was “deeply touched” by what the Jesuit leader had written and said it had its origin in prayer: “He was a man of prayer and a man who fought with God every day, and that strong [desire] was born there.”

He told the delegates from 62 countries, 37 percent of whom were laypeople: “Father Arrupe always believed that the service of faith and the promotion of justice cannot be separated: They are radically united.” Father Arrupe saw this as not just the task of a few but as the concern of the entire Society of Jesus.

Pope Francis reminded them that it is “in the poor” that we find “a privileged place of encounter with Christ,” as they themselves have experienced. As followers of Jesus, he said, we receive “this gift of meeting him in the victims and the poor.”

“Father Arrupe always believed that the service of faith and the promotion of justice cannot be separated: They are radically united.”

This encounter with Christ “purifies our faith,” Pope Francis said, as has happened to the Society of Jesus. Indeed, “the contemplation of the suffering of these brothers and sisters” has led to “a true personal and corporative transformation,” a transformation that has become “a conversion,” he said.

He urged them to always “remain close to the vulnerable ones” and told them, “In our broken and divided world it is necessary to build bridges, so that the human encounter can allow each of us to discover in the least ones the beautiful face of a brother or sister, in whom we recognize ourselves and whose presence—even without words—calls for our care and solidarity.”

Today, he said, “the Spirit, living in us, is moving us to follow Jesus in the service of the crucified of our time.” And there are many such crucified, he noted, pointing to “the well-known situations of injustice and human suffering” and a third world war that is being fought “piecemeal,” as well as to “human trafficking,” “xenophobia,” “the selfish pursuit of national interest” and “the inequalities between states and within states.”

Furthermore, he said, there is the “injury and maltreatment of our common home, especially in the past two centuries,” which effects the most vulnerable peoples of the planet.

Francis said that “to follow Jesus among the crucified” in today’s world involves many tasks. It begins with “accompanying the victims,” then responding to human needs and seeking the most creative responses. But it requires much more.

“We need a true ‘cultural revolution,’ a transformation of our collective way of seeing things and of our attitudes, as well as of our way of seeing ourselves,” he said.

What Lonergan (and Arrupe) can teach us about God, love and being human
Richard G. Malloy

He emphasized again, as he had done in his inspiring and radical talk to the popular movements at Santa Cruz de la Sierra in Bolivia in July 2015, “the importance of the slow work of changing structures, through participation in public dialogue, in those places where decisions are made that affect the lives of the most vulnerable.”

He encouraged these Jesuit social activists and their lay companions to continue in their “creative commitment” in the service of the poor, in works of education, in caring for refugees, in defense of human rights and social services and in the myriad other ways that they are working for social justice, integral ecology and reconciliation in this increasingly “globalized world.”

He urged them to work for a globalization that does not promote uniformity but instead protects and respects cultural differences, religious and personal identities and the poor.

Then alluding to the 57 “martyrs”, Francis acknowledged that many of them had given their lives to the point of death in this work, as had the Jesuits of the Central American University of El Salvador, 30 years ago. “The life and death of the martyrs are an encouragement to our service of the poorest,“ he stated.

As he drew near the end of his talk, Pope Francis emphasized that “our world is in need of transformations that protect life wherever it is threatened and that defend the weakest.” Knowing that these Jesuits and their lay companions are working on the front lines, or as he put it “on the frontiers of exclusion,” Francis sought to encourage them by saying, “we run the risk of despair if we pay attention to human logic alone.”

Instead, we should be aware that the victims do not give up, indeed, he said, “all of us are witnesses that the most humble, the exploited, the poor and excluded, can and do achieve a lot...and when the poor organize themselves they can be authentic ‘social poets.”

Pope Francis told the delegates that “the social apostolate” is not there just “to solve problems”; rather its task above all is “to promote processes [of change] and to encourage hopes.”

Pope Francis told the delegates that “the social apostolate” is not there just “to solve problems”; rather its task above all is “to promote processes [of change] and to encourage hopes,” so as to help people and communities grow and become aware of their rights, develop their capacities and create their own future.

He reminded them that they are working for “the true Christian hope, that seeks the eschatological kingdom,” and he encouraged them to “share your hope wherever you are, encourage, console, comfort and invigorate.” He called on them to “open up the future, raise possibilities, generate alternatives, help to think and act differently.” He counseled them to “sing as you walk” and to “frequent the future!”

Pope Francis concluded his address by sharing with them an image: that of Father Arrupe “in the refugee camp in Thailand, with the discarded people, with all that empathy that this man had, suffering with these people, and with those Jesuits who were opening a new path at that moment in the apostolate and whom he asked one thing only: Do not stop praying.” Francis remarked: “That was his testament.”

He recalled that “Father Arrupe left Thailand that day and on the plane had a stroke.”

Francis ended his talk by telling them, “May that image accompany you always!”