What Lonergan (and Arrupe) can teach us about God, love and being human 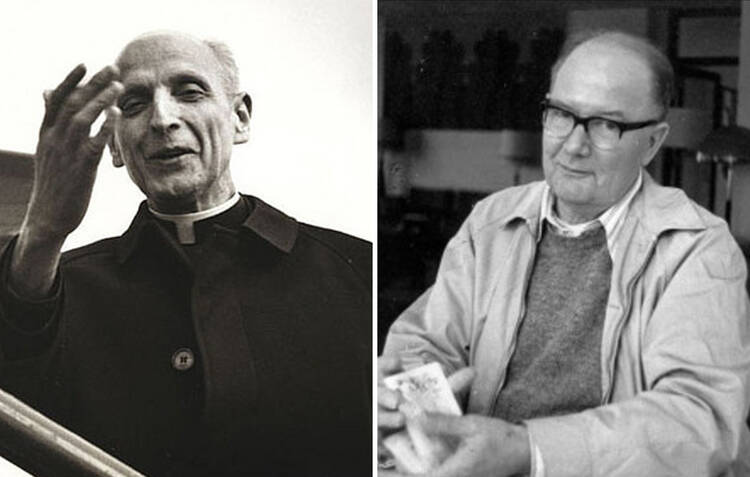 In his 2018 essay “Ten Things That St. Ignatius Never Said or Did,” Bart Geger, S.J., reveals the author of the famous prayer often attributed to Pedro Arrupe, S.J.: “Fall in love, stay in love, it will decide everything.” The actual author, Father Geger discovered, was actually former Jesuit provincial and author Joe Whelan, S.J. (1932-1994).. The full text is as follows:

Nothing is more practical than
finding God, than
falling in Love
in a quite absolute, final way.
What you are in love with,
what seizes your imagination, will affect everything.
It will decide
what will get you out of bed in the morning,
what you do with your evenings,
how you spend your weekends,
what you read, whom you know,
what breaks your heart,
and what amazes you with joy and gratitude.
Fall in Love, stay in love,
and it will decide everything.

On hearing that Father Whelan had penned the prayer, I wondered if he had been influenced by the thought of the Jesuit Bernard Lonergan (1904-1984), one of the great philosopher-theologians of the 20th century.

In reality, Bernard Lonergan’s work is actually more accessible than most people realize. He wrote two major works, Insight (1957) a massive philosophical treatise, and Method in Theology (1972), which is much more manageable.

Lonergan has a reputation for being difficult to understand. Years ago, I gave a talk at a meeting of Wisconsin Province Jesuits and threw in a few ideas from Lonergan. After the talk, a friend, using my nickname, said, “Mugs. Lonergan?” (pause). “Life’s just too short.”

In reality, Lonergan’s work is actually more accessible than most people realize. He wrote two major works, Insight (1957) a massive philosophical treatise, and Method in Theology (1972), which is much more manageable. Hint: Start with Method, or even better, his eight-page essay, “Dialectic of Authority.” Joe Flanagan’s introduction to Lonergan, Quest for Self-Knowledge, is also a good starter.

Early in my Jesuit life I read Insight, and understood a little of it. But it was in the slow, deep reading of Method in Theology, and in writing an S.T.L. thesis on Lonergan and Jon Sobrino, S.J., that I began to incorporate the basics of Lonergan into my life and spirituality. Studying Lonergan gave me a better grasp of who and why and how we are as human persons, connected to and moving toward a deeper life in the mystery and love of neighbor and of God. Lonergan’s work provides an owner’s manual for the human person. His analysis reveals how our minds and hearts actually work. He demonstrates how our living can be intelligently charted, and vastly improved, by choosing to adhere to the inherent norms of our hearts and minds.

A Method for Living

Lonergan urges us to be attentive, intelligent, reasonable and responsible. This is a method, a way of being human, on personal and communal levels. Practicing the “Be-Attitudes” of Lonergan’s system makes for progress. Refusing to be faithful to them makes for decline.

As scientific method has revolutionized the world, so too Lonergan hopes that human beings will be revolutionized by becoming conscious of our own conversion processes on intellectual, moral and religious levels. Such conversions move everyone toward self-transcendence and authenticity. Converted people and groups will make for a world of peace and progress. Lack of conversion will make for a world of disaster and decline.

Lonergan urges us to be attentive, intelligent, reasonable and responsible. This is a method, a way of being human, on personal and communal levels.

Inauthenticity destroys us and our relationships. Think of cheating spouses or unscrupulous business persons. Think of wars and genocides. Think of global climate change. Living authentically means progress is more probable on every level of our existence.

Lonergan offers an analysis of communal disintegration, rehabilitation, recovery and reintegration. When things fall apart, we need to recover the promise of progress. The alternative is to descend into the abyss. (Remember: Lonergan lived through World War I and II.)

Lonergan describes the process of a community or culture descending into crisis. “Finally, the divided community, their conflicting actions, and the messy situation are headed for disaster,” he writes. “For the messy situation is diagnosed differently by the divided community; action is ever more at cross purposes; and the situation becomes still messier to provoke still sharper differences in diagnosis and policy, more radical criticism of one another’s actions, and an ever deeper crisis in the situation.”

The solution according to Lonergan is an invitation to cooperate with “that love of God above all and in all [that] so embraces the order of the universe as to love all men with a self-sacrificing love.”

Lonergan’s method reveals values. The more we are faithful to the demands of values inherent in our human being—the realities of truth, justice, goodness and love—the more we move toward fulfillment in God. The more we truncate truth with lies, undermine good with evil and violate love with selfishness and sin, the more we retreat from our horizon as those destined to live in joy with God forever.

Institutions too must respond. For example, “Religion... in an era of crisis has to think less of issuing commands and decrees and more of fostering the self-sacrificing love that alone is capable of providing the solution to the evil of decline.” The church should be a prime mover in dialogue leading to conversion and common meaning.

The more we are faithful to the demands of values inherent in our human being—the realities of truth, justice, goodness and love—the more we move toward fulfillment in God.

While he prized and privileged the power of the intellect, Lonergan also reflected a great deal on the realities of emotion. His deepening realization of the transformative power of the Holy Spirit to convert and change us, our communities and our world led him to preach that being in love with God is the point and meaning of our existence as human persons. Ultimately, our capacity as transcending persons ushers forth in love. Lonergan lyrically writes:

That capacity becomes an actuality when one falls in love. Then one’s being becomes being-in-love. Such being-in-love has its antecedents, it causes, its conditions, its occasions. But once it has blossomed forth, and as long as it lasts, it takes over….From it flow one’s desires and fears, one’s joys and sorrows, one’s discernment of values, one’s decisions, and deeds.

That sounds a lot like the Arrupe prayer to me. I bet Joe Whelan read Lonergan. Whelan’s own book, Benjamin, is an essay on mystical theology. And Irish Jesuit William Johnston, who also writes on prayer and mysticism, informs us that Johnston visited Lonergan shortly before the great man’s death. Johnston suggested that Lonergan’s method “culminates in mystical experience. Lonergan smiled and said, ‘Yes, yes!’”

Lonergan’s mysticism is grounded in our human experience and consciousness. It reaches beyond us to others, and then to the reality of God. In Insight he writes that our “detached, disinterested, unrestricted desire to know” is not satisfied with “mere answers.” Rather, our desires make us those who “endeavor to enter into the mystical pattern of experience.” Our deep desire to know is actually a deep desire for God. He continues:

Richard G. Malloy, S.J., is Director of Mission and Ministry at Cristo Rey Jesuit High School in Baltimore, Md., and the author of Being on Fire: Top Ten Essentials of Catholic Faith and Spiritual Direction: A Beginner's Guide.

Show Comments ()
Join the conversation: Login or create an account
Before you can comment, you need to update your profile to include your first and last name, as required in our comments policy. Then reload this page and you'll be set up for commenting. Update your profile
Show Comments (
1
)
Comments are automatically closed two weeks after an article's initial publication. See our comments policy for more.
Zac Davis
2 years 9 months ago