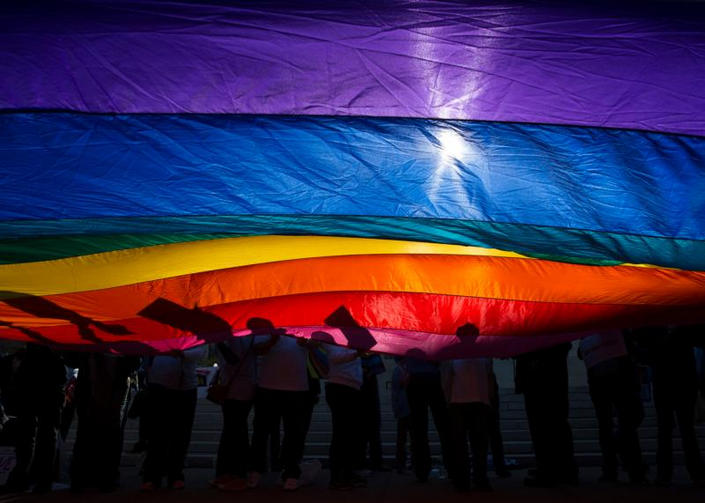 In this 2015 file photo, supporters for same-sex marriage wave a flag outside the U.S. Supreme Court in Washington. (CNS photo/Tyler Orsburn)

Under the proposal, announced by the U.S. Department of Health and Human Services, these agencies would not be excluded from certain federally funded programs for adhering to their belief in traditional marriage.

The chairmen of the U.S. bishops' committees on domestic policy, defense of marriage and religious liberty welcomed the move that would overturn an Obama administration rule.

"We commend the administration for acting to change a 2016 regulation that threatened to shut out faith-based social service providers, namely adoption and foster care agencies that respect a child's right to a mother and a father," the bishops said in a Nov. 1 statement.

"To restrict faith-based organizations' work by infringing on religious freedom -- as the 2016 rule threatened to do -- is unfair and serves no one, especially the children in need of these services," they said.

"We are alarmed and saddened that state and local government agencies in multiple jurisdictions have already succeeded in shutting down Catholic adoption and foster care agencies as a result of their Catholic beliefs," the bishops said.

"At a time when over 400,000 children are in foster care, we need to take steps to increase -- not decrease -- their opportunities to be placed with safe and loving families," they added. "We welcome today's proposed rule modifications and look forward to reviewing and commenting on them further."

The proposed rule comes at a time that the U.S. Supreme Court is considering taking the Fulton v. Philadelphia case, which centers on the city of Philadelphia's decision of March 2018 to stop using the foster program of Catholic Social Services of the Philadelphia Archdiocese because the agency does not place children with same-sex couples.

At issue is whether Philadelphia discriminated against Catholic Social Services by preventing the agency from serving children and families consistent with the agency's religious beliefs.

Organizations such as the American Civil Liberties Union said the new proposed rule from the Trump administration is outright discrimination against the LGBT community, but in a statement released with the proposal, HHS said it is "committed to fully enforcing the civil rights laws passed by Congress."

"The proposed rule would better align its grants regulations with federal statutes, eliminating regulatory burden, including burden on the free exercise of religion. HHS is affirming that it will comply with all applicable Supreme Court decisions in administering its grants programs," the statement said.

HHS added that the proposal represents the administration's "strong commitment to the rule of law -- the Constitution, federal statutes and Supreme Court decisions. These require that the federal government not infringe on religious freedom in its operation of HHS grant programs and address the impact of regulatory actions on small entities."

Show Comments ()
Comments are automatically closed two weeks after an article's initial publication. See our comments policy for more.
Provide feedback on this article
Join the conversation: Login or create an account
Before you can comment, you need to update your profile to include your first and last name, as required in our comments policy. Then reload this page and you'll be set up for commenting. Update your profile
Advertisement
More: Health Care / Family Life / LGBT