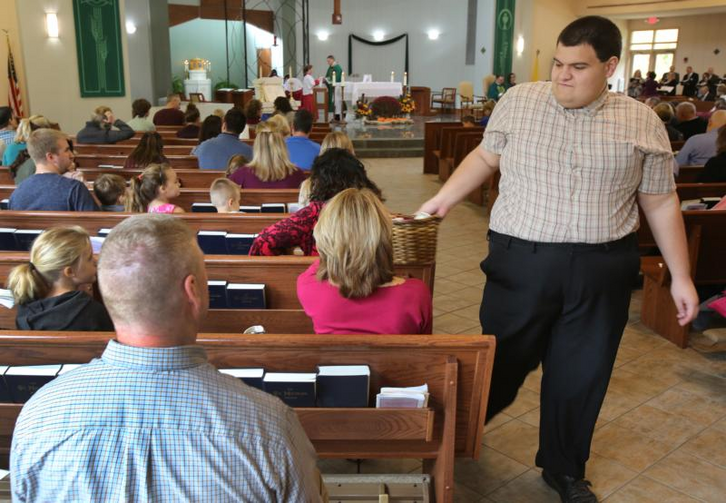 An usher hands the collection basket to a Massgoer Oct. 28, 2018, at Jesus the Divine Word Church in Huntingtown, Md. (CNS photo/Bob Roller)

WASHINGTON (CNS) -- Nearly nine in 10 Catholics surveyed said they want their donations to church institutions to be ethically invested and a majority of those responding voiced particular opposition to investments in companies that produce pornography, tobacco products and e-cigarettes, according to a new survey.

The survey for Boston-based Catholic Investment Services found that about 87% of respondents would be more likely to donate to Catholic institutions if they knew the money would be invested in ways consistent with church teaching and values.

In contrast, about 14% of respondents said ethical investing was not a consideration when donating to Catholic institutions.

People want their donations to go "where it's good and avoid evil."

The results parallel those of a CIS survey released in April. Peter Jeton, the firm's outgoing CEO, said the new study sought to more specifically identify what investments motivates or deters Catholics to give to church entities.

People want their donations to go "where it's good and avoid evil," Jeton said.

"Ethical investing can be a motivating factor in how much people give," he told Catholic News Service. "And if I am the CFO (chief financial officer) of a diocese or if I'm the bishop of a diocese, then I should be explaining very clearly and with frequency what the policy is regarding how people's money is being invested."

The survey involved 500 Catholic adults who answered a series of online questions Sept. 7-9. It has a margin of error of plus or minus 4.5 percentage points.

It covered more than a dozen types of businesses -- from manufacturers of medications used during an abortion procedure to oil and natural gas mining -- to which respondents voiced objections.

“If I am the CFO (chief financial officer) of a diocese or if I'm the bishop of a diocese, then I should be explaining very clearly and with frequency what the policy is regarding how people's money is being invested.”

In the case of the pornography industry, 60% of respondents said church money should not be invested in such endeavors. Opposition also was raised to investing in tobacco products and e-cigarettes (57%), alcoholic beverages (52%), medications used during an abortion (52%), casinos and gaming (51%), medical facilities where abortions occur (50%), gun manufacturing (47%), for-profit prisons/detention centers (45%), security, defense and large-scale weapons (44%), research on embryonic stem cells (37%), manufacturers of birth control (31%) and oil and natural gas extraction (30%).

Jeton suggested that institutional financial officers and bishops be fully transparent about their investment decisions. "The better the engagement, the better for the church," he said.

"They should emphasize the link with Catholic social teaching," he added. "Because if our data is correct, then making people in the pews aware of that should, by all rights, increase the comfort level with the church and a greater willingness to share more of their financial resources with the church."

Those guidelines, in place since 2003, are divided into six broad categories: protecting human life, promoting human dignity, reducing arms production, pursuing economic justice, protecting the environment and encouraging corporate responsibility. Each category lists specific areas of concern, such as abortion, racial discrimination, labor standards and other social needs in which the church has had a voice.

Jeton said he hoped the data developed would influence how diocesan bishops in particular discuss finances with "the folks in the pew."

"They would do well to pay attention to mechanisms that would get more people engaged," Jeton said. "Hopefully with greater engagement there is growing willingness (among donors) to go into their back pocket to help the church."

Well I guess I am really quite naive since I just assumed my diocese did not invest the money given it in areas of pornography, abortion works, guns, drugs and ammo, Fracking, or beating up babies, or joy killing endangered species. Silly me! I guess I should have asked the Bishop.

I also don't want my donations going to abuse settlements or for lavish and unnecessary travel or entertainment by the local priests and bishops. I want to know where my money goes and I want the money invested and spent wisely.