Trump wants to cut down on legal immigration. Here’s how that will affect religious workers. 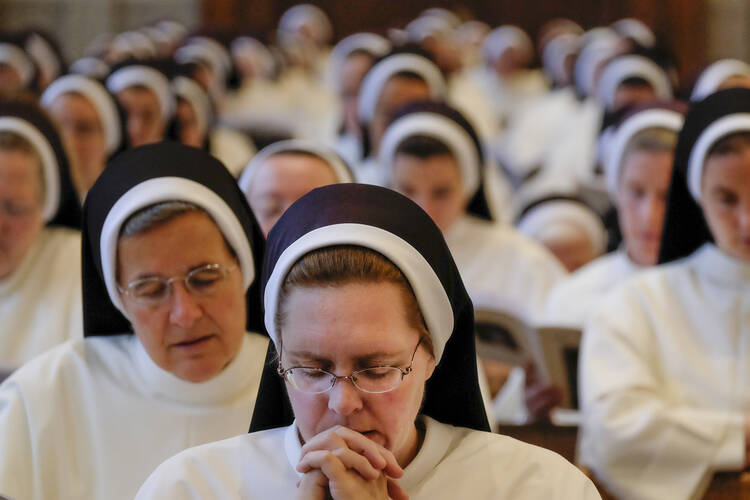 Dominican Sisters of St. Cecilia pray during Mass at the Cathedral of the Incarnation in Nashville, Tenn., on July 24, 2016. Members of religious orders who come from abroad and take a vow of poverty may find it more difficult to remain in the United States. (CNS photo/Rick Musacchio, Tennessee Register)

This summer, the Department of Homeland Security announced that it would make it much tougher for migrants who are “a public charge”—that is, those who utilize Medicaid, food stamps, housing vouchers or other forms of public assistance—to remain in the United States or obtain legal status. The new rules may have serious ramifications for thousands of religious workers in communities who have come to the United States to work as teachers, chaplains, health care workers, or to enter religious life. These men and women may have to consider what a vow of poverty might mean for their ability to stay in the United States. As a Catholic sister and leader, I am concerned about how the public charge rule will affect immigrant religious workers.

This change will erect a huge hurdle for potentially millions of immigrants who will need to prove they can sustain a middle-class lifestyle on their own before they even get a foot in the door, as experts at the Catholic Legal Immigration Network (CLINIC) explain. But immigrants contribute to society by working hard, caring for family and community members and educating children—by being interdependent. Immigrant priests, brothers and women religious contribute in all these ways.

Men and women may have to consider what a vow of poverty might mean for their ability to stay in the United States.

I expect most immigrant religious workers are primarily worried about how the communities they serve will be hurt by these new standards. But there also are potentially detrimental implications for the religious workers themselves.

In deciding whether an applicant will likely become a “public charge,” U.S. Citizenship and Immigration Services assesses factors like the applicant’s age, health, family status, education and skills, as well as assets, resources and financial status. Decisions are made by immigration officers based upon a “totality of the circumstances.” Being over the age of 61 could be counted as a negative factor, while a positive factor might be that an applicant has private health insurance as soon as he or she arrives in the United States.

The D.H.S. rules include no exemption for religious workers. If I were an immigrant, I would not meet the standards as reflected in the new public charge rule.

This process causes particular problems for religious workers in the following respects:

The D.H.S. rules include no exemption for religious workers who face these obstacles. If I were an immigrant, I would not meet the standards as reflected in the new public charge rule.

The government has suggested that this problem can be managed under the Religious Freedom Restoration Act. However, the R.F.R.A. requires individuals or organizations to show how a law or policy imposes a burden on the exercise of religion. The lengthy lawsuit process would make it impractical to use the R.F.R.A. as a way to help a foreign-born religious worker who is currently being denied entry due to the public charge rule.

Religious workers provide vital work to communities, hospitals and schools, and they add to the spiritual strength and well-being of the United States. The communities they serve help to keep our economy humming and continue the American tradition of welcoming immigrants. Requiring these workers to meet income standards based on a middle-class lifestyle represents a core misunderstanding and rejection of their work and value.

I ask and pray that the Trump administration will fix the broken immigration system. But for now, it seems to be seeking every way possible to break up families and communities. The government’s sweeping redefinition of who constitutes a “public charge” and is therefore unworthy of admission to the United States is itself unworthy of our national values.

Sally Duffy, S.C., is the treasurer of the board of directors at the Catholic Legal Immigration Network Inc.

Very interesting analysis. A good contribution to the debate.

There is a major fallacy with your request to the administration. It is not their role in our government to fix the immigration system. That is the role of the legislature. This branch needs to stop the childish name calling and squabbling and start governing.

Yet that is exactly what the administration is doing in making the new rules.

Perhaps if foreign priests and female religious were not imported by the USCCB, the US laity could be empowered to perform their ministries, and there might really be a people of God, instead of two tiers of clerics.

This is not an article about the problems of some religious workers. It’s an anti Trump hit piece directed at changing the immigration policies for millions. Using the emotional attachment that Catholics have for people who give up their lives to help others. Why not state this directly?
There are several easy solutions. Pay them like they do the Jesuits who then donate then money back but receive a stipend. Approach a Republican senator. It would be fixed in a minute