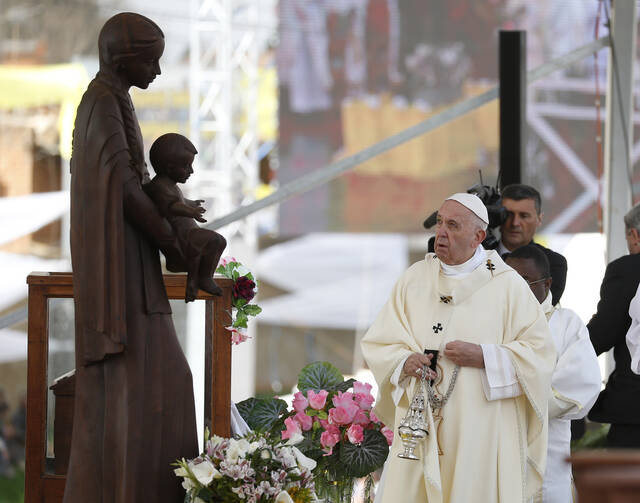 On Sunday, Sept. 8, his last day in Madagascar, Pope Francis celebrated Mass for approximately one million people, in a field in the midst of a poverty-stricken area, miles outside of the capital city, Antananarivo. He encouraged them to build their future “in solidarity and fraternity” and “in complete respect for the earth and its gift” as “opposed to any form of exploitation.”

Tens of thousands present at the Mass had spent the cold, windy night in this field of red-earth soil so as not to miss this blessed “once in a lifetime” moment as one woman told America. Pope Francis in his homily expressed his admiration for them.

The overwhelming majority of those present at Mass are poor, but they love Francis because they see him as “a man of God” and “the pope of the poor,” one who is on their side in world where they have so little. They cheered excitedly and waved yellow and white Vatican flags when he arrived and drove among them in a popemobile that was built in this country. Madagascar is known as “the red island” because of the reddish color of the soil and when the popemobile drove among the crowd, clouds of orange-reddish dust rose up.

Today’s Gospel recounted that “great multitudes accompanied Jesus” and Francis in his homily, taking his cue from those words, told the vast crowd sitting on the ground before him, and others seated on chairs including the President of Madagascar and his wife, both of whom are Catholics, “you too have come in great numbers to receive his message and follow in his footsteps.” He reminded them that “following Jesus is not easy,” as the Gospel tells us, and he explained three reasons why this is so.

He said the first reason why it is hard to follow Jesus is because “the new life the Lord holds out to us seems troubling and scandalously unjust to those who think that entry into the kingdom of heaven can be limited or reduced only to bonds of blood or membership in a particular group, clan or particular culture.” He explained that “when “family” becomes the decisive criterion for what we consider right and good, we end up justifying and even “consecrating” practices that lead to the culture of privilege and exclusion: favoritism, patronage and, as a consequence, corruption.” He told them: “the Master demands that we see beyond this. He says this clearly: anyone incapable of seeing others as brothers or sisters, of showing sensitivity to their lives and situations regardless of their family, cultural or social background “cannot be my disciple.” (Lk 14:26)

The overwhelming majority of those present at Mass are poor, but they love Francis because they see him as “a man of God” and “the pope of the poor,” one who is on their side in world where they have so little.

Secondly, he said it is hard to follow Jesus “if we seek to identify the kingdom of heaven with our personal agenda or our attachment to an ideology that would abuse the name of God or of religion to justify acts of violence, segregation and even murder, exile, terrorism and marginalization.” If they wish to follow Jesus, he said, they have “to build history in fraternity and solidarity, in complete respect for the earth and its gifts, as opposed to any form of exploitation.” He encouraged them to practice “dialogue as the path; mutual cooperation as the code of conduct; reciprocal understanding as the method and standard” and counselled them “not to be tempted by teachings that fail to see that the wheat and the chaff must grow together until the return of the Master of the harvest.”

He said there is a third reason why it is difficult to follow Jesus, a reason that seemed more addressed to the tiny minority with power and wealth in this land. It is difficult to share the new life that Jesus offers “when we are continually driven to self-justification, because we think that everything depends exclusively on our efforts and resources” or “when the race to amass possessions becomes stifling and overwhelming, which only increases our selfishness and our willingness to use immoral means.” He told them, Jesus demands that “we rediscover how to be grateful and to realize that, much more than a personal triumph, our life and our talents are the fruit of a gift, a gift created by God through the silent interplay of so many people whose names we will only know in the kingdom of heaven.”

He told the crowd listening in silence that “the Lord wants to prepare his disciples for the celebration of the coming of the kingdom of God, and to free them from the grave obstacle that, in the end, is one of the worst forms of enslavement: living only for oneself.” That way, he said, “ends up leaving little room for other people. The poor no longer enter in, we no longer hear the voice of God, we no longer enjoy the quiet joy of his love, we are no longer eager to do good.” Francis told them, “this is no way to live a full and dignified life; it is not God’s will for us.”

He explained that Jesus “asks us to lift our gaze, to adjust our priorities and, above all, to make room for God to be the center and axis of our life.” He urged them to look around and see “how many men and women, young people and children are suffering and in utter need!” and, he told them,” this is not part of God’s plan.” He said “Jesus calls us to die to our self-centeredness, our individualism and our pride” and “allow the spirit of fraternity to triumph, a spirit in which everyone can feel loved because they are understood, accepted and appreciated in his or her dignity.”

Pope Francis said that “in the face of contempt for human dignity, we often remain with arms folded or stretched out as a sign of our frustration before the grim power of evil” but, he insisted, “we Christians cannot stand with arms folded in indifference, or with arms outstretched in helplessness. No. As believers, we must stretch out our hands, as Jesus does with us.”

He urged them to look around and see “how many men and women, young people and children are suffering and in utter need!” and, he told them,” this is not part of God’s plan.”

He said Jesus “bids us set out once more, daring to adopt this wisdom of personal detachment as the basis for social justice and for our personal lives.” By doing so, he said, “together we can resist all those forms of idolatry that make us think only of the deceptive securities of power, career, money and of the search for human glory.”

He told them that if they follow this path of Jesus then they can help make their “beautiful country” become “a place where the Gospel becomes life, and where life is for the greater glory of God.”

This afternoon he will visit Akamasoa, ”the city of friendship,” where an Argentinean priest, Pedro Opeka, has done just that in one part of this island.

At the end of Mass, Pope Francis reminded the people that today the church celebrates the feast of the birth of the Blessed Virgin, and he prayed that Mary Immaculate “whom you love and venerate as your Mother and Patroness, may ever accompany the journey of Madagascar in peace and hope.”

According to Trump, this is a “shithole country.”

if he said mass for 1 million poor people it sounds like his sermon was intended for a very small minority. I often find that Francis's exhortations are out of touch with modern 21st century realities.

Mass for approximately one million people, in a field in the midst of a poverty-stricken area, miles outside of the capital city,
One million people!!! Who gets that kind of turnout anywhere, never mind in a poverty-stricken area? Nobody! Pope Francis is doing what Christ commanded all of us to do, and he is 83 years old. As St Pope Paul VI stated:
Modern man listens more willingly to witnesses than to teachers, and if he does listen to teachers, it is because they are witnesses.
“On evangelization in the modern world: Apostolic exhortation Evangelii nuntiandi, December 8, 1975

It’s an honor that Pope Francis is attacking America and the Catholic Church.

In situations that demand a call to justice, remaining silent with folded arms is an act of sheer violence.