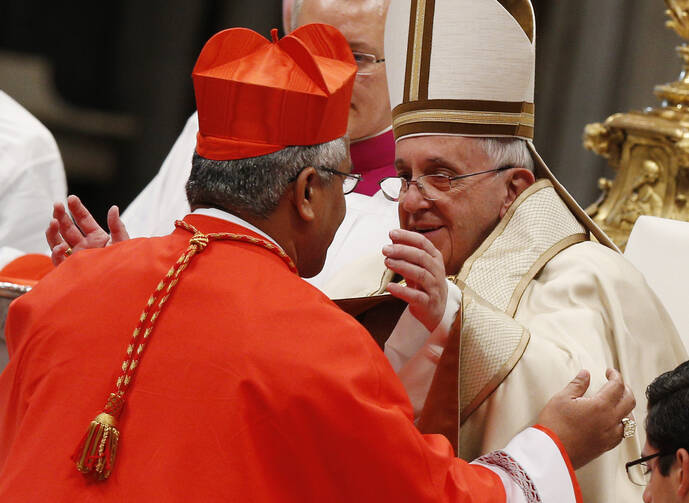 Pope Francis is expected to hold his third consistory before the end of the year and create at least 13 new cardinal electors—that is, cardinals under the age of 80 with the right to vote in a conclave—including at least one American. He is also likely to give the red hat to some over that age.

While the date has yet to be finalized, sources say it is likely to be before the Jubilee of Mercy ends on Nov. 20.

The pope has been working over the summer on the list of possible choices, according to Vatican sources, and could announce the names by mid-October.

By Nov. 28, the number of cardinal electors will have decreased to 107. And presuming that Francis will opt to abide by the maximum number of 120 established by Paul VI in 1975, he should be able to name at least 13 new electors.

At that date, Africa will have 12 of the 107 electors, Asia 13, Europe 51 (including 24 Italians), Central and South America 15, North America (Canada, Mexico, the United States) 13 and Oceania three.

This already represents a change from the 2013 conclave that elected Francis, in which Africa had 11 electors, Asia and Oceania 11, Europe 60 (including 28 Italians), Central and South America 13 and North America 20.

Pope Francis created 31 new electors in his first two consistories: 16 in 2014 and 15 the following year. Significantly, however, he did not give the red hat to any American because at the February 2015 consistory the United States still had 11 electors, far more than Brazil (four), Mexico (three) and the Philippines (two)—all of which have larger Catholic populations.

Since the 2015 consistory, however, the number of U.S. electors has decreased to seven, after cardinals Roger Mahony, Justin Rigali and William Levada turned 80 and Cardinal Francis George died. Given this and the fact that Francis was deeply impressed by the faith of American Catholics and by the warm welcome he received during his U.S. visit, Vatican sources expect him to give the red hat to at least one American this time around.

In choosing new cardinals, Francis has been guided by five criteria. The first is universality: He wants to make the college of cardinals, and especially the electors, as international as possible so as to reflect the different cultures and nationalities in the church. As a consequence of this desire, as of Feb. 15, 2015, the college of cardinals had members from 73 countries and all continents, including electors from 59 countries.

His second criterion gives priority attention to “the peripheries,” in particular to situations of poverty, conflict, natural calamity and countries that have never had a cardinal. This is a hallmark of Francis’ pontificate, reflected in his choice of cardinals from such places as Burkina Faso, Haiti, Myanmar, Mindanao in the Philippines and Tonga.

With his third criterion, Francis aims to contain the number of European cardinals. They counted for over 50 percent of the electors at the last three conclaves, even though less than a quarter of the world’s Catholic population now lives on the old continent. And since more than half the European electors are Italian, Francis wants to reduce their number too.

A fourth and highly significant criterion is to abandon the longstanding tradition by which the holders of certain dioceses automatically get a red hat. This tradition was bound up with careerism, and Francis is allergic to that. He smashed the tradition not only in Italy, in relation to Turin and Venice, but in places like the Philippines and Haiti, giving the red hat to sees on the periphery.

His last criterion is intended to lower expectations in the Roman Curia by reserving the red hat for prefects of congregations and not giving it to presidents of pontifical councils.

It is reasonable to assume that Pope Francis will apply these five criteria when drawing up his new list. If so, then there are likely to be few Europeans and even fewer Italians on it, though the archbishops of Barcelona (Spain) and Mechelen-Brussels (Belgium) are expected to make it.

The archbishop of Bangui (Central African Republic) is considered a strong possibility, as are the archbishops of Jakarta (Indonesia), Havana (Cuba) and Chicago. But there are likely to be surprises too.

Correction: Aug. 17, 2016
An earlier version of this article stated incorrectly that the number of U.S. electors has decreased to nine. That number was corrected to be seven, accounting for the death of Cardinal George and the 80th birthday of Cardinal Rigali.

@gerryorome
Show Comments (
3
)
Comments are automatically closed two weeks after an article's initial publication. See our comments policy for more.
Phil Little
5 years 2 months ago
Another criteria is that the candidate be older and male. As the main and really only function of the Cardinal is the selection of the next Pope, this criteria remains as a serious obstacle for real reform in the church.
Rory Kelleher
5 years 2 months ago
Would it be not be correct to state that the number of U.S. Cardinal electors has decreased to seven since the 2015 consistory, with the death of Cardinal George and with Cardinal Rigali reaching age 80, in addition to Cardinals Mahony and Levada reaching age 80?
William Rydberg
5 years 1 month ago
China deserves at least 12 new Cardinals this round alone. Let's all pray for raproachment with the Vatican, and a restoration of harmony with Beijing. In God's time... in Christ, Mary, Queen of China, pray for us all...