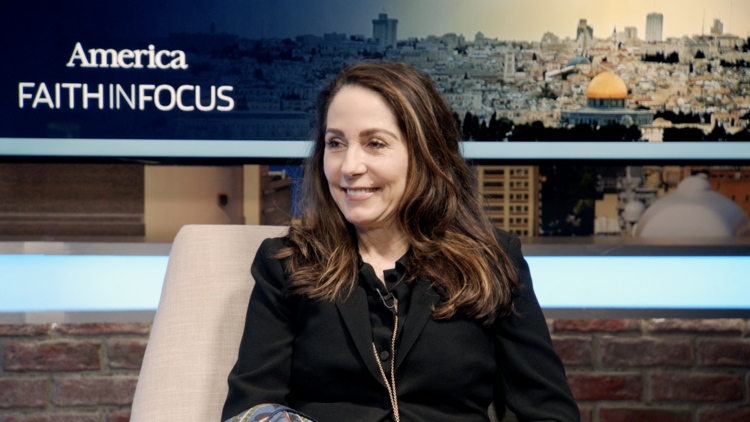 Mary Karr is a best-selling memoirist and award-winning poet. Her memoir, The Liar’s Club, an account of her turbulent childhood in East Texas, was recently named one of the 50 best memoirs of the past 50 years by The New York Times. On a recent episode of “Faith in Focus with Fr. James Martin, S.J.,” produced by America Media, Ms. Karr spoke with Father Martin about her turn from agnosticism to the Catholic Church and how Ignatian spirituality has changed her life. This interview has been edited for length and clarity.

You have described yourself as an unlikely Catholic. How does your faith influence your writing or your practice?

I grew up in an agnostic household, which in the ’50s and ’60s was weird, especially in the Bible Belt—in Texas. So I was an agnostic my whole life. Then my son got me to go to church when he was little. He said he wanted to go. I said, “Why do you want to go to church?”—sort of cynically. And he said, “To see if God is there.” And, I mean, what other reason is there to go to church? I thought, “Well, you know, I didn’t like [taking him to] soccer either.”

So we did this thing—we called it God-O-Rama—and we went to all these different churches that our friends went to. We went to a zendo, a Jewish midrasha and Southern Baptist churches. And I met this really amazing priest, Father Joseph Cain. I realize now how almost no one else could have converted me. He was exactly what I was not interested in. I remember when I did the Ignatian [Spiritual] Exercises asking him, “Did you ever do those?” He said, “Oh, I can never read all those books.” But he was incredibly humble. He lived his life as though whoever came in front of him was sent by Jesus.

I pray every morning. I do probably 10 or 15 minutes of centering prayer and then maybe 10 minutes of lectio divina. Centering prayer can be any dumb thing to quiet your mind. So I started out counting my breaths, you know, one to 10, over and over. Lately, I have been doing the Jesus prayer, “Lord Jesus Christ have mercy on me, a sinner,” as a kind of mantra. The idea is just to get myself quiet. And then I read the liturgy for the day, and I try to just see if anything about it speaks specifically to me or to my life.

At night and sometimes in the morning, I do something called the Examen, where I go over my day, kind of like you are pressing play on a video recorder. I try to not just make a list of places I saw God but to really re-live that day through imagination. Like, “I was really thirsty when I first woke up, and, wow, that first cup of coffee was really good.”

From doing the Examen, I noticed every single time somebody came into my office to show me their poems or their memoir, God was always there.

And then there are those moments; sometimes they are very strange. There was a moment I walked out of my house and there was a man screaming on the street, a big guy screaming at the sky: “Murder or suicide, murder or suicide.” Everybody was walking around him. I started to walk around him, and then I just thought, “This man is my brother, and he is suffering.” I just said, “Excuse me, isn’t there another door? Isn’t there a third option other than murder or suicide?” And he cocked his head at the sky and kind of seemed to be thinking. That was a moment that I might have just forgotten. But in my reflection, I remembered being a little afraid of him and tried to be in that place and think that the call to speak to him really was a call from God or the Holy Spirit guiding me to try to connect with somebody who might have been in pain.

So the Examen for you, as it is for a lot of people, is a prayer of noticing, noticing where God is. Is that right?

It is. But it has also made me change the way I live. I make my living not as a writer but as a professor. I teach, and like everybody who teaches, I spend a lot of time complaining. It was just a habit. Like you would put up office hours and they would fill, and then you would have to add more hours to meet everybody. And there are very important things that I am thinking I have to do, you know—like get my mascara on and get my nails done.

From alcoholism and agnosticism to converting to Catholicism: a conversation on faith with Mary Karr
Zac Davis

So I would complain about those students. But from doing the Examen, I noticed every single time somebody came into my office to show me their poems or their memoir, their novel or just to talk about their lives, God was always there. I just noticed in that savoring—even students who did not particularly like me or who were angry at me and would come in and complain about something I was doing in class, even when it was awkward—I noticed God was always there with me.

So I doubled the number of office hours I do, and I started having dinner with whoever came in in the afternoon and made that a thing where I would have extra time with them. So it really has changed me.

Where is Jesus in all this? Who is Jesus for you?

I just re-did the Spiritual Exercises in 2017, and one of the ways you do them is you imagine yourself in these Bible scenes. And I had these very rich meditations on Mary, who I had never had much feeling for, and on Jesus as a boy. When I had done the Exercises before, Jesus didn’t have any pores; he was very airbrushed. But this time I saw him and that idea of being born a human—having all the power that there is and having this luminous mystery of creation at your fingertips and deciding to put on a meat mask and to go take a whipping from a bunch of Romans. It is going to be a short line of people who are going sign up for that duty. So I guess for me the risen Christ as well as Jesus as a human being are both very central in my meditation on the Scriptures. 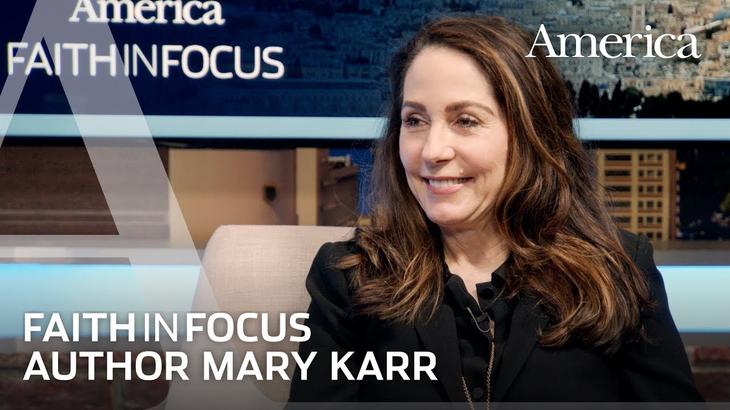 Correction: Sept. 18, 2019
A previous version of this article stated Mary Karr’s Lit was named one of the 50 best memoirs of the past 50 years by The New York Times. The Liar’s Club was the memoir that made the list.