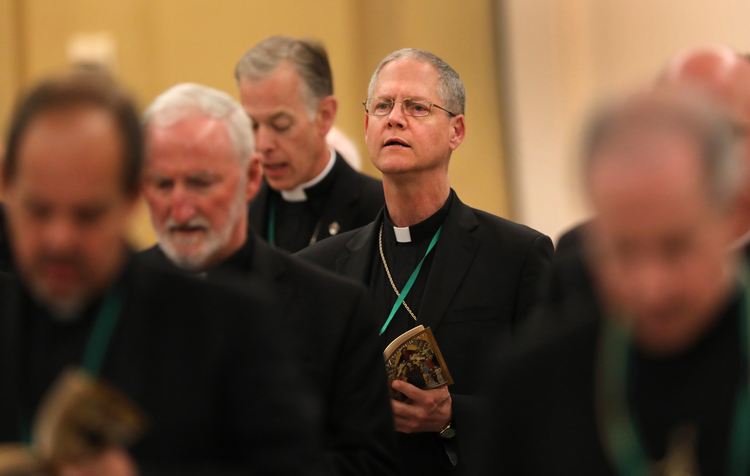 SEATTLE (CNS) -- The bishops of the Archdiocese of Seattle reiterated the Catholic Church's opposition to assisted suicide in response to a news report about a man who used a fatal drug combination to end his own life under Washington state's Death with Dignity Act.

The Associated Press report Aug. 26 included a photo of Robert Fuller receiving a blessing at St. Therese Parish in Seattle a few days before his death and asserts that "Fuller's decision (to end his life) was widely known and accepted among the parishioners."

Fuller was terminally ill and administered two syringes into his feeding tube to take his own life, the report said.

The report raised concerns among Archbishop J. Peter Sartain and Coadjutor Archbishop Paul D. Etienne "because it may cause confusion among Catholics and others who share our reverence for human life," the archdiocese said in a statement.

Alfie’s last days: a little boy’s life and death stoked a furious debate that will not soon end
Kevin Clarke

At the time the photo was taken, "parish leadership was not aware of Mr. Fuller's intentions," it said. The priest in the photo, Jesuit Father Quentin Dupont, "was told Mr. Fuller was dying and wanted the blessing of the faith community."

When parish leaders learned of Fuller's plans, another priest, Father Maurice Mamba, met with him "to discuss the sacred gift of human life and how we are called to respect and revere that gift as disciples of Jesus," the archdiocese said.

Catholics believe that all life is a gift from God and that "every person has inherent and inalienable dignity because we are made in God's image and likeness," it said.

"Based on this teaching and concern for human life and the common good, the Catholic Church does not support suicide in any form, including medically assisted suicide," the statement said.

"We have and will continue to accompany" those with terminal illnesses "by providing compassionate care and spiritual counsel," it said, noting that "the pastoral, healing and consolation ministries of the church always take place in the light of faith and hope in the resurrection."

I would much rather have the option of assisted suicide when pain becomes so unbearable so as not to enjoy the sacredness of life. No I do not want to hear about offering up the pain for the souls in purgatory. Just allow me to die with the dignity of life that I continue to enjoy.

John Paul II demonstrated the absurdity of toughing it out till the bitter end. Post-Enlightenment views suggest that a prolonged life of unnecessary suffering and a loss of all human dignity and agency is not really a life at all. That the rigid Catholic position is untenable is demonstrated by the decision of more states to legalize assisted suicide for the terminably ill. Divorce and remarriage, abortion, same sex marriage are all quite legal in this country and in others. Assisted suicide will be legal in every state before long. The Church is once again on the wrong side of history and on the wrong side of this important issue.

Another complete copout of an article in America regarding even the most basic of the Church’s teachings.
The entire parish knew of this man’s intentions to take his own life (and one assumes that they most likely knew for sometime and not just a few days before he did it), but parish “leadership” was not aware of his intentions until a few days before he acted and were not aware of those intentions at the time of the blessing? C’mon! Are we really expected to believe that they were that clueless about this man’s true intentions, intentions that most of the parish already knew about? Are they really that disconnected from the parishioners?
So, the question for me then is: once they did become aware and spoke to him, did this leadership turn a blind eye, (and basically lie about the timing of “when they knew what,”) so that they could basically cave to parishioner pressure and go ahead with a public blessing of this poor man and his misguided death wish, and thus condone this offensive act of self-destruction that clearly goes against Church teaching?
But judging from the utterly lukewarm and milquetoast Archdiocesan reaction, evident in the headline—“um... we’d like to confirm the dignity of life here in the face of this tragedy, but we’re not going to rebuke these well intentioned parish leaders and these parishioners because that would be like... uh... you know... like harsh. You know, harsh like Jesus would do or like those backward Church Fathers who pushed for things like Spiritual Works of Mercy and all that craziness,” it’s all good, it’s his truth, and her truth, and their truth, really there is no Truth, so it’s all cool dude.
And regarding the Archdiocese’s concern that this type of official endorsement might cause confusion among faithful Catholics, one need only look to the misguided and uneducated comments of Messrs. Nier and Gallagher here to see those concerns are very well-founded.

As the Church should, but having the power of the state weigh in on this matter is the issue at hand. Laws against suicide are designed to prevent people from seeking a permanent solution to a temporary problem and to force treatment on the mentally ill who are to sick to seek it.

It was never meant to interfere in the right to end a long term illness because people would often die more quickly. We must also allow people to give up when doctors will not. We are a resurrection people. Some truly believe that God is an Ogre who damns us for ending pain.