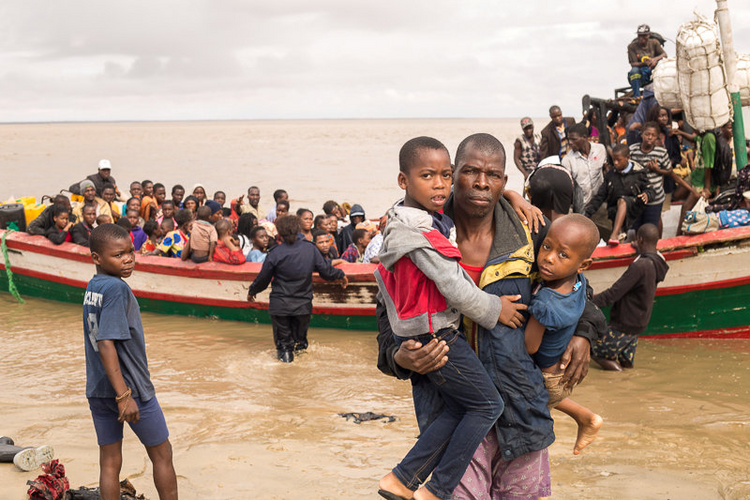 Survivors of Cyclone Idai arrive at an evacuation center on March 21, 2019, in Beira, Mozambique. The African nation is one of three that Pope Francis will visit in September. (CNS photo/Denis Onyodi, Red Cross Red Crescent via Reuters)

Pope Francis returns to sub-Saharan Africa for the second time on Sept. 4 to 10. He will visit Mozambique, Madagascar and Mauritius—specifically the capitals of the countries that are all former colonies of different European powers.

In an exclusive interview with America, the president of the Jesuit Conference of Major Superiors of Africa and Madagascar, Agbonkhianmeghe Orobator, S.J., spoke about the significance of the pope’s visit, not only for the three countries he will visit but also for the Catholic Church in this continent of 54 countries and 1.3 billion people (17 percent of the world’s population).

“A papal visit is always a special and welcome event in Africa,” the Nigerian-born Father Orobator said. “I believe he will put fresh hearts into a people facing so many challenges.” He added, “Think of Cyclone Idai and its devastating consequences [in Mozambique] or the multiple tragedies that Malagasy people have had to deal with in recent times. And the political uncertainties in Mauritius.”

“A papal visit is always a special and welcome event in Africa.... I believe he will put fresh hearts into a people facing so many challenges.”

“Africa faces multiple challenges today, chief among them is a serious gap or dearth of leadership,” said Father Orobator. “Everything that goes wrong in Africa can be traced back to this leadership deficit—be it corruption, violence, poverty, unemployment, migration or political dysfunctionality.” On the other hand, he said, “Africa is blessed with an abundance of human, natural and material resources. The people are the continent’s greatest asset.”

He said Africa’s leaders “are like the biblical shepherds who feed on their flock and disorient, destroy and scatter them” (Jer 23:1-4; Ez 34:2-5). He added, “Our putative leaders have a lot to learn from the pastoral leadership style of Pope Francis.”

Since becoming pope in 2013, Francis has visited Egypt, Kenya, Uganda, the Central African Republic and Morocco, and he will probably visit South Sudan early next year. Father Orobator said, “His unique ways of leading and inspiring hope, his emphasis on mercy and his unpretentious compassion for the poor— these actions speak strongly to Africans.”

Asked what Pope Francis could do to encourage the growth of the Catholic Church in Africa, Father Orobator said: “It is narrow thinking to perceive and assess the growth of Christianity or the church only in numbers. The quality of faith and the depth of commitment to the Gospel count as more important criteria. On a continent full of bad news, [the question is], how can the Gospel become good news?”

He said that the pope can help this process “by calling the church, in particular its leaders, to a more exemplary form of witnessing to the Gospel and a more prophetic leadership, one that leads by example in practicing the Beatitudes and walking with the poor and the marginalized, accompanying the youth in their quest for a meaningful and hopeful feature, and incarnating the pope’s call to ecological conversion and stewardship.”

Father Orobator also said: “There are many people in Africa who feel excluded—be they migrants, victims of all forms of abuse and sexual gender-based violence or divorced and remarried Catholics. They need to feel and know that the church is a home for them, not a merciless judge.” Speaking of “the scourge of clericalism,” he said that Francis can challenge church leaders in Africa to shed “trappings, privileges and entitlements...in order to embrace a humble manner of living the Gospel and serving the people of God.”

Father Orobator: “There are many people in Africa who feel excluded.... They need to feel and know that the church is a home for them, not a merciless judge.”

Asked about tensions between Christians and Muslims in a number of African countries, including his homeland, Nigeria, Father Orobator responded: “In reality, religion has been exploited and continues to be manipulated and instrumentalized for political interests and economic gains. Religion is not the problem—charlatans masquerading as evangelists, pastors and preachers are.”

Francis is expected to have private meetings with many of the “close to 400 Jesuits” who are in the three countries he will visit. Father Orobator said these Jesuits are “working in fields as diverse as basic, primary and higher education, pastoral ministry, retreat and spirituality, social empowerment and transformation, accompaniment of youth, ecology, primary evangelization, media and university chaplaincies.”

He reported that “the Jesuits are expanding their apostolic footprints in Mozambique and helping to rebuild lives and livelihoods after Cyclone Idai. In Madagascar, the Jesuits have been an integral part of the evangelizing mission of the church for more than half a century.” Beyond that, they “work selflessly to implement the universal apostolic preferences of the Society of Jesus.”

On his trip, Francis will first visit the Republic of Mozambique, a country rich in natural resources but ranked by the United Nations as among the world’s least developed countries. Bordered by the Indian Ocean to the east, it shares frontiers with Tanzania to the north, Malawi and Zambia to the northwest, Zimbabwe to the west, and Eswatini (Swaziland) and South Africa to the southwest. This was a Portuguese colony from the early 16th century until it gained independence in 1975. After a long civil war, multi-party elections were held in 1994, but sporadic political violence has continued. In early August, the government and the main opposition group signed a new peace accord for this country of 30 million people, some 70 percent of whom are Christian (including the 27 percent who are Catholic) and 19 percent Muslim.

On Sept. 6, the pope will travel from Maputo, the capital of Mozambique, to Antananarivo, the capital of Madagascar. Some 250 miles off the coast of East Africa, Madagascar includes the fourth-largest island in the world and several smaller ones. It has a population of 27 million, and an estimated 41 percent are Christian (including four million Catholics), and 7 percent are Muslim; about half the population follow indigenous beliefs. The country’s diverse ecosystems and unique wildlife are threatened by rapid population growth and development. It was a French colony from 1897 to 1960, when it regained its independence; since then it has been through several political crises and is now considered a fragile constitutional democracy. Like Mozambique, it is on the U.N.’s list of the world’s least developed countries.

How Uganda’s award-winning Catholic radio station is changing the lives of its listeners
J. J. Carney

On the morning of Sept. 9, the pope will fly to Port Louis, the capital of the Republic of Mauritius, for an eight-hour visit before returning to Rome. Mauritius is an island country 1,200 miles off the southeast coast of Africa. It was a colony of the Netherlands (1638–1710), France (1715–1810) and then Britain, from which it gained independence in 1968. This multiethnic country of 1.2 million people has a parliamentary system and is highly ranked in terms of economic and political freedom. About half of its population is Hindu, one-third is Christian (including over 300,000 Catholics), and 17 percent are Muslim.

While Father Orobator will not be present in any of the countries Francis will visit, he expressed his hope that the first Jesuit pope will “encourage the little people—women, men and children prone to despair. Put fresh hearts into them.” He said, “The church in these countries is vibrant and does good work among the impoverished people,” and he is hopeful that Pope Francis’ visit “will help renew its mission in these lands and rekindle the light and life of the Gospel of the Risen Christ for a people accustomed to living with numerous socioeconomic and political difficulties.”

Paragraph #8, next to the last line, the word "feature" should probably be the word "future."

I hope Francis will tell them , as he has said before, that they "don't need to breed like rabbits".

Eighty percent of the flora and fauna of Madagascar are unique to that island. The island broke off the African continent tens of millions of years ago, and it slowly drifted away from the continent, all the while sufficiently isolated that the biological evolution happening in Africa had little or no impact on the many species of flora and fauna that developed in Madagascar itself. The lemurs of Madagascar are perhaps the best known unique fauna on the island, but there are many more one-of-a-kind species that thrive there. Once a French colony, Madagascar is now an independent country. The French exploited Madagascar for the 63 years they controlled the country, opening a number of sapphire pit mines that now scar and pollute many parts of the countryside. I trust that Pope Francis, with his gifts for words and empathy, will do and say the right things during his visit to this poor but very friendly and religious country.