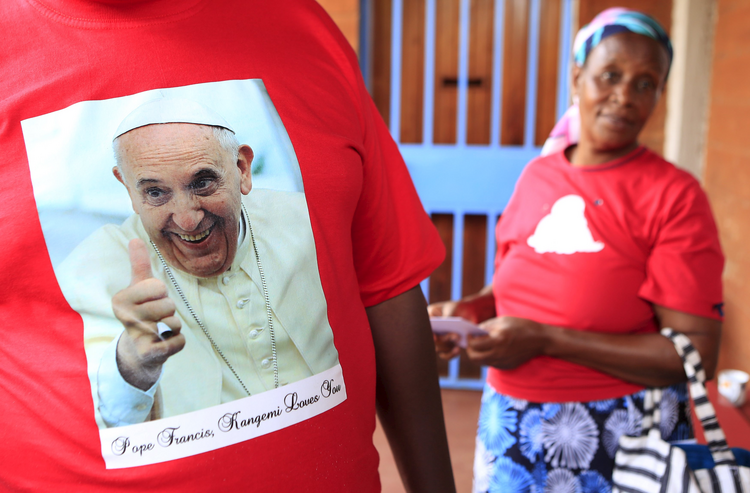 Early Wednesday morning, November 25, Pope Francis will board an Alitalia Airbus 330 for Nairobi, the capital of Kenya, the first stop on his six-day visit to the second most populous continent in the world where Christianity is growing more than in any other continent.

He is visiting three of the 54 sovereign states of this vast continent--Kenya, Uganda and the Central African Republic (CAR)--moved by a great desire to bring their citizens a message of peace, reconciliation, dialogue and to encourage them to overcome internal divisions and poverty.  He communicated his desire  in two video messages last Monday: one to the people of Kenya and Uganda, the other to the inhabitants of the conflict-torn CAR.

“ I am coming as a minister of the Gospel, to proclaim the love of Jesus Christ and his message of reconciliation, forgiveness and peace”,  Francis told the people of Kenya and Uganda.  Both lands are former British colonies and majority Christian countries.

He is coming, he said, “to confirm the Catholic community in its worship of God and its witness to the Gospel, which teaches the dignity of every man and woman, and commands us to open our hearts to others, especially the poor and those in need”.   Catholics count for 32 percent of Kenya’s 43 million people and 47 percent of Uganda’s population of 17 million.

“At the same time – he told them -I wish to encounter all the people of Kenya and Uganda, and to offer everyone a word of encouragement.” Addressing the people of both countries which have in different ways experienced violence since gaining independence in the early 1960s ,Francis said, “We are living at a time when religious believers, and persons of good will everywhere, are called to foster mutual understanding and respect, and to support each other as members of our one human family.  For all of us are God’s children.”

Both countries have a very young population, and Francis declared that “a highlight” of his visit will be his meetings with these young people “who are your greatest resource and our most promising hope for a future of solidarity, peace and progress.”

He asked the inhabitants of both countries “to pray” that his stay among them “will be a source of hope and encouragement to all” and, in advance of his visit, he invoked “God’s blessings of joy and peace” on all of them.

Francis also sent  greetings to the 4.6 million citizens of the Central African Republic, a former French colony.  In a video message on November 23, he spoke of “the joy which pervades me” because he will soon be with them.  He will arrive in Bangui on November 29 and, ignoring the risks, will spend a night in this city as a visible sign of his closeness to them .

Commenting on the fact that their “dear country has for too long been affected by a violent situation and by insecurity of which many of you have been innocent victims”,  Francis told them, “the goal of my visit is, above all, to bring you, in the name of Christ, the comfort of consolation and hope.”  And, he added, “I hope with all my heart that my visit may contribute, in one way or another, to alleviate your wounds and to favor conditions for a better, more serene future for Central Africa and all its inhabitants.”

Pope Francis reminded the people of CAR that the theme of his visit is “Let us pass to the other side”, and explained that it is an invitation to Christian communities “to look ahead with determination and encourage each person to renew their own relationship with God and with their brothers and sisters to build a new, more just and fraternal world”.

Catholics count for over one-third (37 percent) of CAR’s population, and seeking to give them new hope and encouragement, Francis – breaking with a centuries old tradition - will open the Holy Door in Bangui Cathedral next Sunday, in a highly significant gesture leading up to the Jubilee Year of Mercy.  He will also visit the city’s central mosque in an effort to overcome Christian-Muslim tensions in this strife-torn land, and encourage them to work together to build peace and stability in this, their homeland..

Everybody recognizes that there are serious risks attached to this, his eleventh foreign trip since becoming pope in March 2013.  Security is on maximum alert in all three countries, particularly after the recent terrorist attack in Paris and earlier ones in Kenya.  The situation is particularly problematic in CAR the French Minister of Defense made abundantly clear to the Vatican a day before the Paris attack. France has a contingent of 900 soldiers in its former colony, but the Minister informed the Vatican that they could not guarantee the Pope’s security when he is in Bangui, and particularly when he opens the Holy Door for the Jubilee of Mercy in the city’s cathedral on November 29.   But that news did not in any way change the Pope’s mind, he is determined to visit this people and he knows that there is also a sizable international peace-keeping contingent there and that Christian and Muslim leaders alike want him to come. The Vatican is doing all it can to ensure the visit will go smoothly and last Friday,  Domenico Giani, commander of the Vatican’s Gendarmerie, visited Bangui for a final reconnaissance.

Pope Francis will visit Nairobi, Kampala and Bangui, the capital cities of these three countries on his six day visit, and will deliver 19 talks in four languages: English (2), Spanish (2), French (1) and Italian (14).

A number of Vatican officials are accompanying him, including Cardinal Pietro Parolin, the Secretary of State, and Archbishop Angelo Becciu, the substitute in the Secretariat of State.   Security officers from the Vatican Gendarmerie and the Swiss Guards will also be on the plane to protect him, as will his doctor.

Seventy journalists and media personnel from news outlets across the globe, including America’s Vatican correspondent, are travelling on the plane with the Pope, together with five members of the Vatican’s own communications operation.  Francis will greet them soon after take-off and will hold a press conference on the journey home from Bangui to Rome, October 30.

Pope Francis is scheduled to arrive at Nairobi’s “Jomo Kenyatta” airport  at five o’clock on Wednesday afternoon, after a 7 hour 15 mins flight from Rome, having covered 3,348 miles.  The President of Kenya and Church leaders, including Cardinal John Njue, will greet him on arrival as he begins a visit that has sparked great excitement and worldwide interest, not least because of the risks attached.