Is it time for the U.S. church to hold a regional synod to address the abuse crisis?

Is it time for the U.S. church to hold a regional synod to address the abuse crisis? 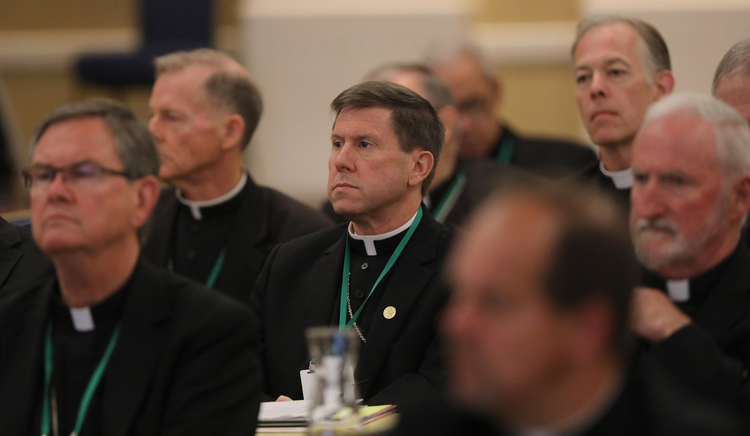 Bishop J. Mark Spalding of Nashville, Tenn., center, listens to a speaker on the first day of the spring general assembly of the U.S. Conference of Catholic Bishops in Baltimore on June 11, 2019. (CNS photo/Bob Roller)

WASHINGTON (CNS)—The conference of bishops, meeting in Dallas, had lately adopted a charter and norms for the protection of children. Now the eight called for something more.

Convene a plenary council or regional synod, they urged their fellow bishops, and use it to get at the roots of what had happened so as to prevent anything like that from ever happening again. The signers of their joint letter included Cardinal Daniel N. DiNardo of Galveston-Houston, then bishop of Sioux City, Iowa, and now president of the national bishops' conference, and Archbishop Allen H. Vigneron of Detroit, an auxiliary bishop there back then.

More than a hundred bishops expressed interest in the suggestion, which eventually came to focus on the synod option. The bishops' conference took some note of it. But in time, enthusiasm faded and the proposal died as the hierarchy went about implementing their new child protection measures.

Now it seems that those eight bishops were ahead of their time. In the face of a crisis even worse than 17 years ago, the idea of a regional synod for the Catholic Church in the United States looks increasingly appealing.

In the face of a crisis even worse than 17 years ago, the idea of a regional synod for the Catholic Church in the United States looks increasingly appealing.

"In the long experience of the church," the eight bishops told their brother bishops in 2002, "the taking of action by bishops through a council or synod has been a tried and true strategy to advance reform." And most people would agree that there's a need for church reform now.

The crisis has grown and now no longer involves only the sexual abuse of children by some clerics. Instead it has become a crisis of ecclesial communion whose elements include mistrust of church leaders heightened by the McCarrick and Bransfield affairs, tension and conflict among ideologically motivated groups all claiming they represent authentic Catholicism, and a dismaying gulf between what the church teaches and what many Catholics believe on both faith and morals.

Numbers underline the seriousness of the situation. Last year, there were 143,000 Catholic marriages in the United States compared with more than 426,000 in 1970. Infant baptisms numbered 615,000 as against 1.089 million back then. The percentage of Catholics attending Mass weekly fell from 54.9% in 1970 to 21.1% in 2018. Half the Catholics age 30 and younger have left the church, while, as Auxiliary Bishop Robert E. Barron of Los Angeles points out, for every person who joins the church today, six leave.

Against this background, an appropriate theme for a regional synod might be "The Challenge of Transmitting the Faith."

The Code of Canon Law speaks of regional synods as "special sessions" whose members are the bishops of the region involved or bishops chosen to represent them. Since the Second Vatican Council there have been regional synods for the Netherlands, Lebanon, Africa, the Middle East, and other places. A regional synod for the Amazon region of Latin America will be held in October.

In his address to the bishops at their general meeting in Baltimore last June—read for him by one of his staff because he was in Rome attending a meeting convened by Pope Francis—Archbishop Christophe Pierre, papal nuncio to the U.S., seemed to make the case for a regional synod.

Speaking of the need for bishops to collaborate on solving problems, he said, "Personally, I believe that the body of bishops is stronger and more effective working together and walking together. Since the beginning of his pontificate Pope Francis has called for a synodal church—a church that walks together."

Archbishop Pierre: “The body of bishops is stronger and more effective working together and walking together.”

And he added, "In the process of walking together, we also have the opportunity to hear the different members of the group. Certainly, the church needs to listen to the voices and insights of the lay faithful. ... A bishop cannot think that matters concerning the church can be resolved by acting alone or exclusively among peers."

But, someone might ask, how could a regional synod of bishops possibly be anything except bishops acting "exclusively among peers"? The answer seems obvious. The synod should be preceded by a serious, honest consultation of Catholics to find out how they see the present crisis—input of the utmost importance in shaping a realistic agenda for the synod. And beyond consultation, laypeople should be present at the synod itself as observers with the right to speak.

Certainly there are risks, particularly the risk of disappointed expectations if the pre-synod consultation appeared to be mainly for show or if the synod itself wasn't fully transparent or produced only negligible results.

But a well-planned and well-executed regional synod also offers important advantages arguably Available now in no other way. Most of all, it would give the bishops an opportunity to refurbish their credibility as effective leaders while giving other Catholics reason to think their voices are being heard and reason to hope for real reform.

"In the revelation of Jesus Christ we have all the resources we need to transform this time of trial into a 'day the Lord has made,'" the eight bishops said back in 2002. "We must witness with all the authority of our apostolic ministry to bedrock Gospel principles, and we must chart a course of action on the basis of these principles."

That's at least as true now as it was then. A regional synod for the church in the United States is one way—maybe the best way and possibly the only way—to get it done.

Well, if DiNardo was one of the original signers 17 years ago, and now that he is the head of the USCCB and hasn't suggested a regional synod at this point in his "leadership", I don't expect anything in the future.

A continental synod under the leadership of defacto Patriarch, Sean Cardinal O'Malley, not the Nuncio or the USCCB.

A synod should do a deep dive into the effect of unstated asexuality in both doctrine and abuse. Most asexuals are healthy and self realized and then you have the abusers and the bishops (who are in the closet to themselves).

RICO indeed. Is this article some kind of joke? Let’s invite the men in dresses for a synod. That will solve the crisis. The better approach is for the Pontiff to ask for the resignations of every U. S. Bishop, and keep the few who “get it.”

But if the synod is held, I nominate His Eminence Cardinal Roger Mahony to chair it, thus ensuring its comedy relief.

No meaningful reform is possible if the powers-that-be in the church remain opposed to redefining sin to allow for healthy and protective expressions of that which comes naturally to humans-----sexuality, sometimes in the form of same-sex attraction. I can forgive church leaders somewhat for covering up for offenders and trust they can and will do better----though pedophiles cannot be trusted. I do not trust that leaders will redefine what's considered sin but is merely part of being human, as God made us. Celibacy could be made optional, women could be given opportunities to serve as priests and deacons, homosexuals could be welcomed the same as heterosexuals, artificial contraception could be ok'd, etc.. vs. perpetuating the myth that all the Catholics who step out of bounds on these issues have sinned terribly. Jesus might not, surely would not, concur. We can be pretty sure that Jesus cares are real evil such as sex abuse/exploitation, however.

"exclusively among peers"...says it all. No matter how they huff and puff they can't put lipstick on a pig. Why don't they try going out into the real world and getting a real job. This poorly written article (which reads like it was scribbled on the back of an envelope) is just a silly piece of marketing shill for a bunch of guys who have no more influence or credibility left--please stop trying so hard to make them appear relevant.

Name calling is never a solution to a problem. Please keep your comments focused on the issues and offer ideas to fix what is broken

A synod is a great idea if it is truly open to not just a few top ranking clergy but elected representatives from the clergy, religious, and laity. I’m not optimistic that our bishops are ready to open church management and direction at this point. But , in my opinion, the real crisis of confidence in the Church we have today will not get resolved with “business as usual.” The sexual abuse crisis was a tipping point. Until confidence is restored, things will only stay the same or get worse. The bishops need to be open to a new governance model

The process of "walking together" also means walking and working together with Pope Francis. The trouble here is that a significant number of U.S. Catholic bishops are in opposition to the Holy Father's reforms including his diagnoses of clericalism being the root cause of the sexual abuse scandal and at least two U.S. prelates have accused the Amazon Synod of apostasy. Moreover, one U.S. Cardinal is questioning the validity of the conclave that elected Francis. I really don't know if the U.S. Catholic Church can be saved. God help us.

Any communication is better than none. Maybe eventually some necessary change may occur from within, however unlikely that may seem. What may look like complacency, may in fact be caused by men with frozen feet, incapable of change. How else can we explain that those supposed to represent the evangelical call of our savior Jesus Christ are now the instruments of the Church's destruction. Even the most faithful have lost trust in the clerics. Without trust there is no love and where there is no love there is no God. How long can any relationship last when there is no love? We are living in an age of delusion and paying for it with the loss of souls, the very currency of our God.

Interesting Shaw omits to mention Australia is doing just this. Plenary 2020. Pre plenary dialogue is well underway. The USA could learn from reporting Australia's process, and progress, both positive and negative. 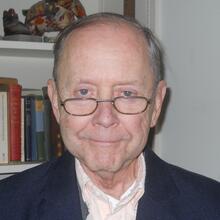 Russell Shaw is a former secretary for public affairs of the National Conference of Catholic Bishops/United States Catholic Conference, the predecessor of today’s U.S.C.C.B. His 22 books include American Church: The Remarkable Rise, Meteoric Fall, and Uncertain Future of Catholicism in America and Nothing To Hide: Secrecy, Communication, and Communion in the Catholic Church.