Priest donates $20,000 to coal miners whose company filed for bankruptcy 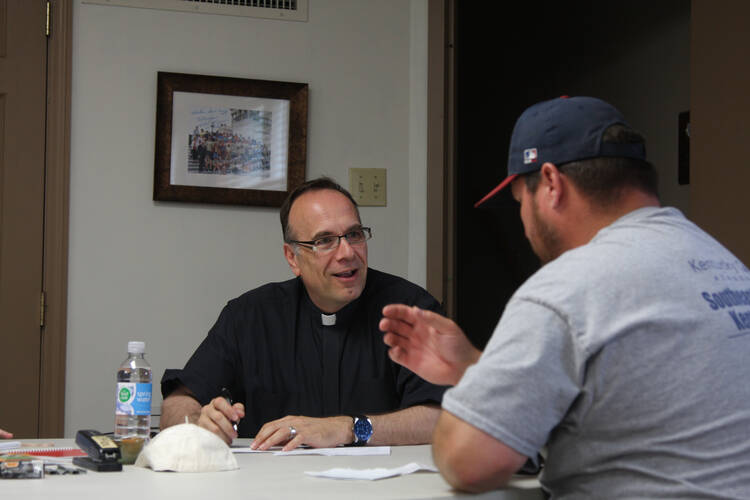 Father Jim Sichko, left, a Lexington priest, pays the electric bill of an out-of-work coal miner at Holy Trinity Catholic Church in Harlan, Kentucky, on Monday, July 15, 2019. Sichko handed out more than $20,000 on Monday to miners who are struggling to pay bills after the coal company they work for filed for bankruptcy protection. (Will Wright/Lexington Herald-Leader via AP)

HARLAN, Ky. (AP) — A priest in Kentucky handed out more than $20,000 on Monday to miners struggling to pay bills after the coal company they work for filed for bankruptcy protection.

Many miners say their 401(k) and child support payments had been taken out of their paychecks but the money hadn't been deposited in the proper accounts as required, the Lexington Herald-Leader reported. If the money was not rightfully paid, there could be a criminal investigation, Harlan County Judge-Executive Dan Mosley said. A spokesperson for the company didn't immediately comment on the allegations Monday.

Miners say they were paid Friday, June 28. But court documents show Blackjewel officials knew they didn't have enough money to pay workers and had hoped to get the money the week of July 1, according to the Lexington Herald-Leader .

Then, the full amount of the paychecks was clawed back from the workers' bank accounts Monday, July 1. Some miners say that led to their accounts being overdrawn.

"These men and their families, they sacrifice their lives. They had a good job, and now they're out of luck," Sichko said.

The prominent Lexington evangelist was chosen as a missionary of mercy by Pope Francis three years ago, tasked with doing good deeds for others.

Diocese of Lexington Director of Catholic Charities Ginny Vicini says Sichko raises money on his own. Sichko says he felt compelled to help the miners because he's the grandson of a Pennsylvania coal miner.

Blackjewel and its subsidiaries employ about 1,700 people in Kentucky, Virginia, West Virginia and Wyoming.