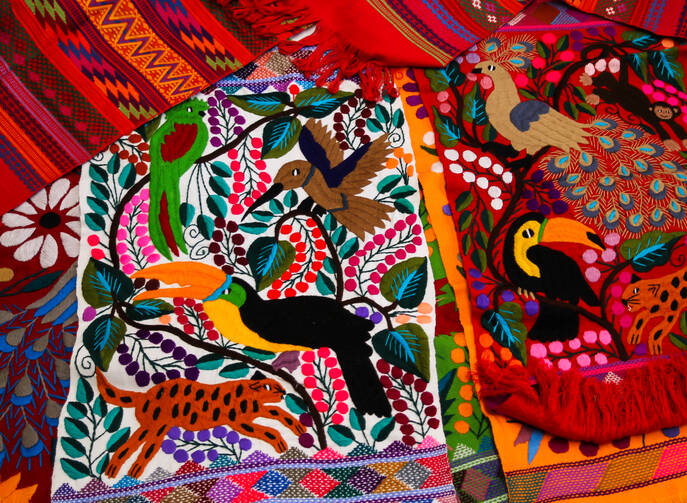 Any hand stitcher will tell you: To embroider or crochet slowlymends the spirit, stitch by stitch. It is the one thing I can do to quiet my mind in the dark hours of night, when sleep is a chimera. For some brutalized women in Honduras, to crochet not only keeps the demons at bay; it may be a lifeline to a future without fear.

I volunteer at a shelter for asylum seekers in Tucson, but only recently did I discover the true extent of the abuse women in Honduras endure, from an opinion piece in The New York Times by Sonia Nazario, titled “Someone is Always Trying to Kill You.” Routinely raped, tortured and finally murdered, they can end up as bodies dumped on roadsides to be found by children at play.

In the middle of Ms. Nazario’s harrowing report is the most incongruous of images: a close-up photograph of a woman’s hands embroidering a bird in flight. She is the founder of a women’s center in the Honduran town of Cholomathatserves victimized women. While the leaders of the center teach women how to protect their rights, they also encourage them to crochet and make things they can sell.

Any hand stitcher will tell you: To embroider or crochet slowlymends the spirit, stitch by stitch.

The little that women carry with them as they flee north often includes heirloom-quality handwork: artifacts of a family left behind. They may lose their belongings en route, but they will never lose the generational skills honed since childhood.

The round doily I discovered in the desert outside my former ranch near the Arizona-Mexico border testifies to the art of family. The tightly wound planet of yarn coils in a starfish pattern around its center. The blue yarn trails from an unfinished edge down and around a palm-sized hunk of mesquite wood fashioned into an improvised“spindle on the run.” Think of it. In the midst of migrating, in the middle of the Arizona desert, a woman crochets.

I witness firsthand the healing nature of crochet and embroidery through the needlework groups I host with traumatized women and some men at Casa Alitas, a shelter for migrants located in a former Benedictine monastery. At the end of a long hall, past separate dormitories for men and women filled with wall-to-wall Red Cross cots, is an activities room, a rare concession for the bare-bones, volunteer-run shelters at the border.

The little that women carry with them as they flee north often includes heirloom-quality handwork: artifacts of a family left behind.

The room, like the building itself, is a godsend. Used as a sewing room by the Benedictine nuns who lived there for 80-plus years, it emanates a quiet sense of the holy. Natural light floods in through clear-paned windows onto a large fabric table in the center of the pop-up classroom, where the guests practice emergency English, kids draw and paint, and mothers with infants on their laps embroider and crochet whenever they can. Cries of children echo down the hallways, but inside the activity room is a sanctuary of imagination, a balm for anxious and exhausted migrants.

No matter how beat down they feel, guests are eager to put their hands to cloth. Survivors of assault carry scars that will last a lifetime, but the solace and patience found in handwork lends tensile strength and resiliency to one’s days. Women working with each other, like my grandmother’s quilting bees in rural Appalachia, create the kind of support it takes to get through the worst of times. In Latin American culture, that comadre—friendship and respect between women—remains the foundation of family and community.

Folded into the basket of embroidery and crochet supplies I bring to the shelter is my own mother’s embroidery. It is when I share my mother’s work and how the act of embroidering keeps me close to her that the deepest connection is made. The women smile and nod, eyes soften, and shoulders relax. We have all lost our mothers and the homes of our youth. Working the cloth keeps those we have lost alive in us.

The women at the monastery create their own projects by tracing elements from pattern books of birds, butterflies and flowers onto cotton pañuelos (handkerchiefs). They choose the supplies they will need to complete their piece—needles, thread and an embroidery hoop—to use on the final leg of their bus trips to sponsors living across the United States. They are skilled artisans with much to teach, embroidering quickly and confidently and crocheting with the same tight stitches I found on the blue doily in the desert.

Other guests who may be too exhausted to do their own designs from scratch participate in a group embroidery project, a large cotton cloth stamped with a design of Our Lady of Guadalupe, the personification of feminine forbearance in the face of adversity.

We are all makers. The unceasing hunger to work with one’s hands stems from the basic human drive for peace, security and freedom from fear. To transform the ugly and broken into something of meaning and beauty, to transcend the present like the birds in flight often seen in the drawings of migrant children:This is humanity’s common thread.

Not unlike birds of air, humans artfully build our nests on the most fragile of branches, yet we are endlessly inventive in our cultural arts, from stitching tortilla cloth servilletas and Navajo rug weaving to Bedouin tent-making. Our penchant for creativity has always saved us from savagery. We thrive instinctively when we bond and beautify.It comes as no surprise that a recent message from a shelter in Nogales, Mexico, 60 miles south of Tucson, where families now wait for weeks or months for an asylum interview, was not the regular request for food, clothing and blankets. It was instead an urgent plea from migrating women for crochet needles and yarn. 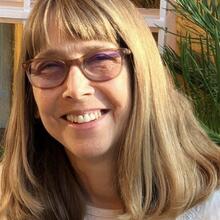 Valarie Lee James, a writer, artist and Benedictine oblate, is the art and activities volunteer coordinator at the Casa Alitas migrant shelter in Tucson, Ariz. Ms. James writes for the Global Sisters Report, blogs at www.ArtandFaithintheDesert.wordpress.com and is completing her first book, on art and faith on the border.

Love this article!! For years I watched my own Mom knit, crochet, embroider, needlepoint or sew while watching TV or listening to music. When I asked her why she was always doing something with her hands her response was simple, “it reminds me of all for which I am grateful.” I never really understood this until I read your article! I get it now! That sense of peace, of doing something for others, of being able to dream, design and accomplish a piece of beauty brings tremendous satisfaction!
Thank you for sharing this!

What a beautiful comment Cathe! I can't thank you enough for sharing your personal experience here. The personal, love, and family, are what it's all about. The gratitude your mom felt is exactly what our guests at Casa Alitas express in word and deed. Their hopes and dreams going forward lie in every stitch of the embroideries that they begin at the monastery and then take with them on the long bus rides across the country to families and sponsors. We learn so much from them about faith.

Thank you for this....I am in solidarity with these women and their struggles. Please, how can I help? I am a retired art teacher, mother and grandmother and an Associate of the Congregation of Notre Dame. Thank you again

Dear Jean, Thank you so much for responding to the article! We can always use donations (earmarked for Arts and Activities Dept.) at Casa Alitas To purchase more Art supplies in general. Besides food and clothing, art activities are a lifeline for the kids and their mothers. If you are interested in helping to support volunteer trips across the border to deliver art, embroidery and crochet supplies to shelters just on the other side of the AZ/MX line where people wait an indeterminable time, you can PM me at valarieleejames@gmail.com. Any help is appreciated. Bless you!