Archbishop Fulton Sheen to be beatified

Archbishop Fulton Sheen to be beatified 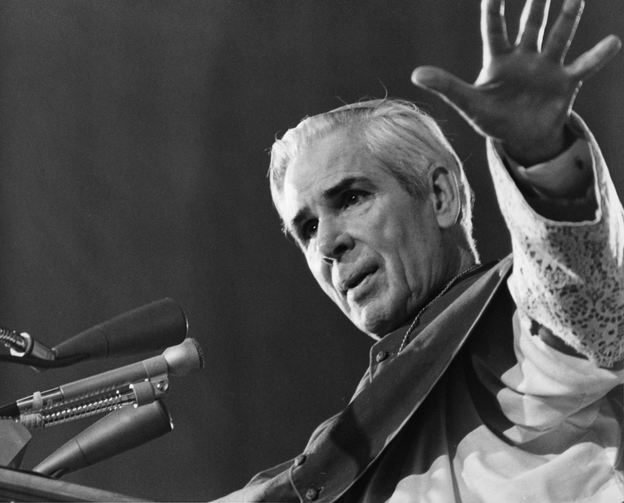 The Vatican announced the move Saturday, which clears the way for beatification. It comes just weeks after a New York court ruling allowing Sheen's niece to bury him in Peoria, Illinois, where he was ordained, ending years of litigation and allowing the process for sainthood to resume. Sheen, who died in 1979, was known for his on-air evangelism. He started in 1930 on NBC radio with a weekly Sunday program titled "The Catholic Hour," and expanded to television in 1950 with NBC's "Life is Worth Living," which had a weekly following of more than 30 million viewers.

What is to be done with the body of Archbishop Fulton Sheen?
James T. Keane

No date has been given for beatification, but the Peoria Diocese said Saturday it is beginning preparations for the celebration, which would be held in Peoria.

Peoria Bishop Daniel Jenky said he's grateful the Vatican acted quickly after the transfer of Sheen's remains, and hopeful Pope Francis will set a date for beatification soon. "It is truly amazing how God continues to work miracles," Jenky said.

Sheen is believed to have interceded after a baby was born in 2010 and showed no signs of life. The diocese says family and friends prayed to the late Sheen to intercede, and the baby was transferred to a Peoria hospital near the Cathedral of St. Mary of the Immaculate Conception, where Sheen was ordained in 1919 and is now entombed.

The diocese says after 61 minutes without vital signs, the baby's heart began beating and the child breathed normally, and the infant is now a healthy young child. The diocese conducted a canonical investigation and submitted its findings to the Vatican in 2011.

Fulton Sheen was a great man. I have had some doubts about his apologetical style, but I think the substance was always there: an orientation toward the truth of Christ. And therefore a humility that purifies away the stains of clericalism and triumphalism that perhaps were in the air in those times.

Educated and informed Catholics are diminished by the pope assigning credibility to this circumstance as a miracle. The pope is grasping at straws.

Ah - how are things among the Sanhedrin and the Pharisees these days anyway? Glad you weren't round when the centurian's child was healed!

If you want to know why Futon Sheen is a saint, read any one of his many books on Catholic faith. His life was a beautiful testimony to Christ.

"The diocese says after 61 minutes without vital signs, the baby's heart began beating and the child breathed normally..."
Any medical records, doctors, nurses, etc to back this up?

I do not doubt that Fulton J Sheen was a good man. But was he a saint? I perceive him more as a man who was save about the media, not so much as a man walking the streets and dark valleys of the world with the downtrodden, poor, and hopeless of this world.
The occurance of a miracle does not require the mediation of a "saint', but only the mediation of the Divine.

I remember him well. My mom made us watch him on tv when we were kids. Other than that, she was a great mom. Gotta love the cape. As to the miracle, the whole thing seems a little sketchy. Medical miracles in particular are just somebody's judgment about what would have happened were it not for intercessory prayers to whomever. Not really much there to hang your hat on. And a TV star priest?? The (amazingly biased) Wikipedia article calls him the "first televangelist" as if that was a good thing.

Sheen was a prophet as well as a preacher of deep wisdom and electrifying charisma. He deeply affected my family's faith, and his insights are more relevant than ever. Here's how he touched our lives:
http://crazystable.squarespace.com/journal/2009/12/10/a-way-out-of-the-grave.html

People write here as if miracles are so rare that it is hardly credible to acknowledge one in public.
Not so. Warriors and doctors are seasoned in the stark reality and universality of sudden and brutal and widespread premature death from accident, violence and disease.
We can tell almost at a glance, fatal, in some circumstances but always after reflection on the full story.
I have seen more than one, each was not followed by fanfare or blaze of publicity or establishment of a cult or anything like it.

So, I celebrate two miracles in recent days, the one which helped decide the final step to canonise John Henry Cardinal Newman (who refused ordination as a bishop) and the beatification of Peter John Fulton Sheen. (Fulton was mother's surname before marriage).
Interesting they both involved babies, one unborn.
Just a hint that God looks upon them as people.

I pray that the Pope converts to be more like Blessed Fulton Sheen. Based on PF1's conduct and collaboration with the gay mafia and all the statements that theologians are calling heretical, there is ZERO chance that Pope Francis can be a saint of the Church.