New Vatican document: Defend secrecy of confession at all costs

New Vatican document: Defend secrecy of confession at all costs 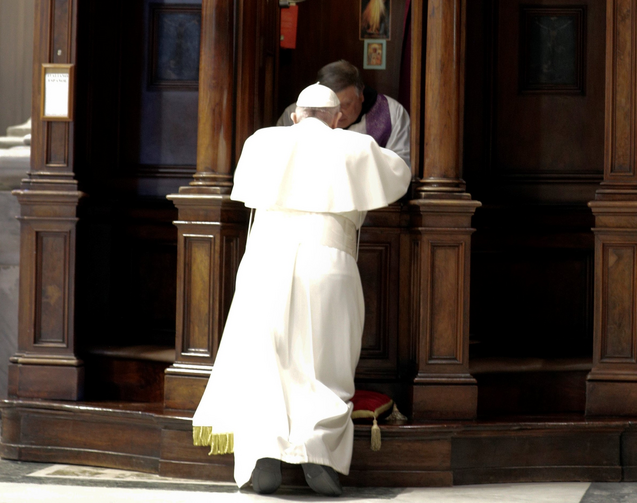 VATICAN CITY (CNS) -- In the light of "a worrying negative prejudice" against the Catholic Church, Pope Francis ordered the publication of a document affirming the absolute secrecy of everything said in confession and calling on priests to defend it at all costs, even at the cost of their lives.

The need for the absolute secrecy of confession "comes directly from revealed divine law and has its roots in the very nature of the sacrament to the point that no exception whatsoever can be admitted in the ecclesial sphere and even less in the civil one," a new Vatican document said.

The "note of the Apostolic Penitentiary on the importance of the internal forum and the inviolability of the sacramental seal" was approved by Pope Francis June 21 and published by the Vatican July 1.

The note was signed by Cardinal Mauro Piacenza, head of the Apostolic Penitentiary, a Vatican court dealing with matters of conscience.

Some recent challenges to the secret of confession have come from states trying to react to the Catholic Church's clerical sexual abuse crisis, the note acknowledged. The document did not mention any specific proposed legislation, such as that working its way through the California legislature or proposed in Australia in response to a government inquiry into the sex abuse crisis.

"The priest, in fact, comes to know of the sins of the penitent 'non ut homo sed ut Deus' -- not as a man, but as God -- to the point that he simply 'does not know' what was said in the confessional because he did not listen as a man, but precisely in the name of God," the Vatican document said.

"A confessor's defense of the sacramental seal, if necessary, even to the point of shedding blood," the note said, "is not only an obligatory act of allegiance to the penitent but is much more: it is a necessary witness -- a martyrdom -- to the unique and universal saving power of Christ and his church."

The new Vatican document also placed the question of secrecy in the larger context of a "cultural and moral 'involution'" that seems incapable of "recognizing and respecting" essential elements of human existence and life in the church.

Too often, it said, "the judgment of public opinion" is invoked as the highest court, and people feel free to publish or broadcast anything with the excuse of letting the public be the judge without concern for a person's conscience, reputation and right to defend him- or herself.

"In such a context," the note said, "there seems to be confirmation of a certain worrying negative prejudice against the Catholic Church," both because of "the tensions that can be seen within the hierarchy and resulting from the recent scandals of abuse horribly perpetrated by some members of the clergy."

The prejudice, it said, "sometimes translates into an unjustifiable 'demand' that the church itself, in some matters, conform its own juridical system to the civil laws of the states in which it lives as the only possible 'guarantee of honesty and integrity.'"

The Catholic Church "always has safeguarded the sacramental seal with all its moral and juridical strength," the note said. "It is indispensable for the sanctity of the sacrament and for the freedom of conscience of the penitent."

When administering the sacrament of reconciliation, it said, a priest acts not as himself but "in the person of Christ." Not only is he not free to divulge anything about the confession to anyone, including the penitent outside the confessional, but he even is "obliged to suppress every involuntary memory of it."

A refusal to reveal what was said in a confession can never be described as complicity with or covering up evil, the note said, insisting that confession is "the one real antidote to evil" because it is the place where a person can abandon him- or herself to God and repent.

The document specified that when a penitent confesses to a sin that is a crime, the priest can never make turning him- or herself in a condition of being granted sacramental forgiveness, although sincere repentance and a resolution to not sin again are part of "the very structure" of the sacrament.

When the victim of a crime mentions it in confession, the document said, the confessor should instruct the person about his or her rights and about the practical steps the person can take with both civil and church authorities to report the crime.

"We must be watchful that the sacramental seal is never violated by anyone and that the necessary reserve connected to the exercise of church minister is always jealously safeguarded, having as its only purpose the truth and integral good of the person," the document said.

"Any political action of legislative initiative aimed at breaking the inviolability of the sacramental seal," it said, "would be an unacceptable offense against the liberty of the church, which does not receive its legitimacy from individual states, but from God."

The note from the Apostolic Penitentiary said the secrecy extends to communications between a person and his or her spiritual director when dealing with matters of conscience. In fact, it noted church practice that spiritual directors of seminarians, like their confessors, are not permitted to intervene in seminary staff discussions about whether a candidate should be ordained.

And, it said, the same kind of "professional secret" or confidentiality found in relations between some professionals and their clients or patients is valid also for church officials acting on behalf of the Vatican in certain cases, particularly when the case is covered under "pontifical secret."

The statement seems to make no reference to a situation where a child abuser confesses. Is the priest forbidden from taking any action to help the child or their family, other than try to persuade the abuser to contact either the family or the authorities? This is a glaring omission and will be seen as contradicting pledges by church authorities to do all they can to protect and safeguard children.

it's not an omission, the seal of confession is a universal principle that applies in cases of child abuse just like it applies in cases of murder, adultery or any other sin, however heinous. a Priest can't divulge the information they learn in confession (or, per the article, other spiritual guidance conversation) because the purpose of confession is to help the sinner repent and be forgiven, not to gather evidence on bad stuff going on.

also, do you imagine child abusers will continue going to confession if their confessions can be used against them in criminal courts or elsewhere? the cost of breaking the seal of confession is giving up on the souls of sinners who would be afraid to confess