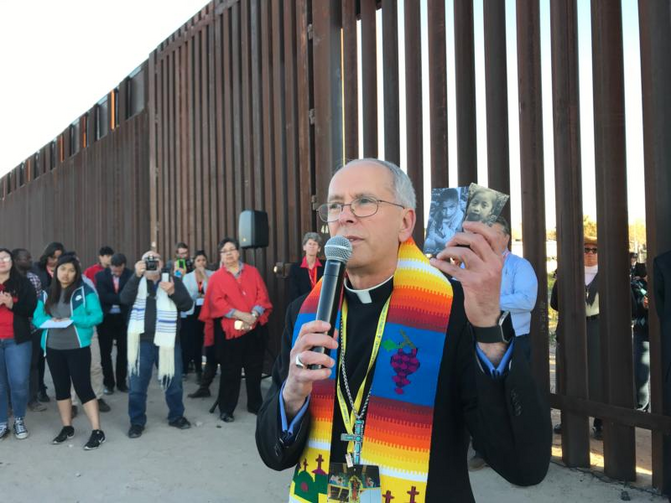 Bishop Mark J. Seitz of El Paso, Texas, holds photos of two migrant children who died in U.S. custody; he spoke during the Feb. 26, 2019, Interfaith Service for Justice and Mercy at the Border near Sunland Park, N.M. On June 27, he prayed and walked with migrants on the Lerdo International Bridge, which connects El Paso to Ciudad Juarez, after he tried to help immigrants seeking asylum into the country. (CNS photo/David Agren)

WASHINGTON (CNS) -- Bishop Mark J. Seitz of the U.S. border Diocese of El Paso, Texas, walked and prayed with a group of migrants at the Lerdo International Bridge in El Paso June 27 as they sought asylum in the U.S. but were turned away.

Cameras surrounded him, as some individuals nearby held large posters with the faces of children who have recently died on the border.

The El Paso bishop then accompanied migrants to Ciudad Juarez in Mexico, where they met with leaders of the Diocese of Ciudad Juarez and visited Casa del Migrante, a diocesan migrant shelter. He issued a statement, which he provided June 27 to Catholic News Service.

"As a Catholic and Christian leader on the border, I am often called to be a doctor of the soul," he said, delivering the statement in English and Spanish. "Standing here at the U.S.-Mexico border, how do we begin to diagnose the soul of our country?

He said that in the U.S., we'd like to think that prejudice and intolerance are problems of the past, but the present shows that's not the case.

"We have found a new acceptable group to treat as less than human, to look down upon and to fear. And should they speak another language or are brown or black ... well, it is that much more easy to stigmatize them."

Bishop Seitz spoke with and prayed with Father Javier Calvillo, director of the Casa del Migrante shelter, which receives immigrants turned away on the Mexico side. Migrants turned away have to stay on the other side until U.S. courts can hear their asylum case, as part of the "Remain in Mexico" policy implemented by the Trump administration.

"Why can’t we put ourselves in their shoes?" Bishop Seitz asked in his statement. "Because we have decided they are not our neighbors, we have decided that they are aliens and illegals. We think these parents simply have no right to save their children from violence or malnutrition.

"They have no right to a job or to support their families. They have no right to reunite with family," he continued. "For this heartsick government and society, these people should have stayed home, given into hopelessness and watched helplessly as their children suffer."

The bishop participated in the event during a week that has seen much outrage in the country -- and the world -- after the publication of photos of a father and daughter who drowned in the Rio Grande River trying to cross the border into the U.S. and reports of deplorable conditions in immigration centers where children are detained.

"Would we rather they die on the banks of the Rio Grande than trouble us with their presence?" he asked. "But we have not suffered the mistreatment meted out to them by those who represent our country. We haven’t really felt their hunger and cold. And it is not our children who will be denied food, water and tenderness tonight. We Americans need our hearts checked. Our hearts have grown too cold and too hard and that bodes ill for the health of our nation.

Border @BishopSeitz on international bridge where he will try to help migrants cross pic.twitter.com/9IiXdFUyjv

Before he began his walk on the bridge, he told Catholic News Service in a phone interview June 27 that wanted to call attention "to what's being done in the shadows" every day, as people seeking refuge are forced into dangerous places such as Ciudad Juarez.

"What's problematic is the way we're treating people fleeing for their lives," he told CNS. " We force them back into dangerous places with limited resources, where they're going to have to stay a year or more."

He said he was not scared to undertake the action on the bridge because he has seen the effects of the policies as centers in El Paso are seeing fewer people trying to cross at ports of entry, legally asking for asylum, but essentially denied the opportunity because of the long wait and are instead taking dangerous paths, such as the one that 25-year-old Oscar Alberto Martinez Ramirez took with his 23-month-old daughter, Valeria, and one that led to their deaths.

"They're taking more and more dangerous paths," he said. "We've already witnessed the death of nine people last week, or so, in attempts to cross. That's so awful. How can we sit back and say 'that situation is too bad, that's the way it is,' We can't. We have to try and do something and shine a light ... on this inappropriate system that is really causing the death of people who are in the first place, simply fleeing for their lives."

Thank you! THIS is Church! This is why I'm Catholic! These are our brothers and sisters we must stand with them.

Should not the good Bishop be busy like another with the title of one of his local schools? Or is he following in the footsteps of Christ with the downtrodden and the refugee, challenging those wearers of the MAGA phylactery?

The studies have been done and the results are in.
People who take children with them to try and breach borders are killing them.

Would you take your young kids on a journey knowing they are two or three times more likely to die of disease or accident than if they lived at home?
There are a large number of people seeking to transmigrate - many of them face death if they do not flee and many of them are simply seeking to increase their economic situation.

Your point is Alan? The reality is, any which way you look at it, these are our neighbours in need, and it is our obligation to help them. Do we not feed the hungry man on the street in case he is actually not really hungry, or maybe only a little hungry? "But for the grace of God go I". When we forget that, it's time to seriously evaluate our heart and soul. What would we do if we learned Christ was among them, one of the ones trying to cross the border, one of the ones seeking refuge. What would we do then? Well, he is with them on their desperate journey, and we are where....?

Thank you Bishop Seitz for being Catholic!

Opting Out
2 years 2 months ago

blatant hypocrisy is part of the reason why people have such great contempt for the US news media and the US Bishops in the Catholic Church. Pandering by no other name. Fake outrage....

Aug 2016
Obama Has Deported More People Than Any Other President
How many people have been deported under Obama?

President Barack Obama has often been referred to by immigration groups as the "Deporter in Chief."
Between 2009 and 2015 his administration has removed more than 2.5 million people through immigration orders, which doesn’t include the number of people who "self-deported" or were turned away and/or returned to their home country at the border by U.S. Customs and Border Protection (CBP).

How does he compare to other presidents?

According to governmental data, the Obama administration has deported more people than any other president's administration in history.
In fact, they have deported more than the sum of all the presidents of the 20th century.
President George W. Bush's administration deported just over two million during his time in office; and Obama’s numbers don’t reflect his last year in office, for which data is not yet available.
https://abcnews.go.com/Politics/obamas-deportation-policy-numbers/story?id=41715661

Trump isn't matching Obama deportation numbers
Immigration and Customs Enforcement has deported more immigrants this fiscal year than any full fiscal year of Donald Trump's presidency, but it has yet to reach Barack Obama's early deportation levels, according to new internal Department of Homeland Security figures obtained by Axios.

Why it matters: With four months left in the fiscal year, it puts Trump's deportations in perspective and shows the reality behind the anti-immigrant pledges that have come to define his presidency.
Under the Obama administration, total ICE deportations were above 385,000 each year in fiscal years 2009-2011, and hit a high of 409,849 in fiscal 2012. The numbers dropped to below 250,000 in fiscal years 2015 and 2016.