Pope Francis to theologians in Naples: One cannot do theology without freedom 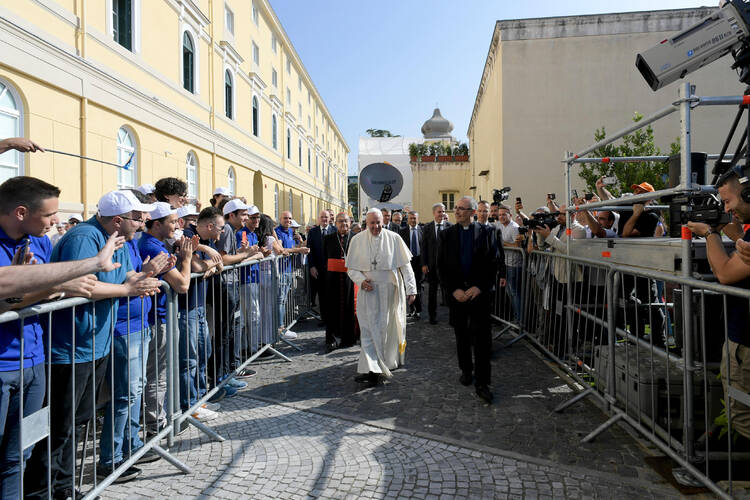 Pope Francis arrives at the Pontifical Theological Faculty of Southern Italy in Naples for a conference on theology and the Mediterranean June 21, 2019. (CNS photo/Vatican Media)

Pope Francis emphasized the pressing need today for “a theology of acceptance and dialogue” when he delivered the keynote address at a conference in Naples on June 21 at the Jesuit run Pontifical Theological Faculty of Southern Italy. He called for students of theology “to be educated in dialogue with Judaism and Islam, to understand the common roots and the differences of our religious identities” and “in this way to contribute more effectively to the building of a society that appreciates diversity and fosters respect, brotherhood and peaceful coexistence.”

He went on to explain that “the dialogue which is the hallmark of a theology of acceptance” can be first of all “a method of study, as well as of teaching.” He explained, “When we read a text”—be it the Bible, the Talmud or the Koran—“we dialogue with it and with the world of which it is an expression.”

The two-day conference, which brought together more than 1,000 theology professors and students from Italy and other countries, focused on how theology should be done in the Mediterranean area in the light of “Veritatis Gaudium” (“The Joy of the Truth”), the Apostolic Constitution signed by Pope Francis and issued by the Vatican in January 2018.

He went on to explain that “the dialogue which is the hallmark of a theology of acceptance” can be first of all “a method of study, as well as of teaching.”

The document outlines the nature and purpose of the ecclesiastical universities and faculties worldwide that issue degrees recognized by the Vatican in theology, canon law and philosophy and the norms governing them. It was significant also because it opened the possibility of “distance learning” through online resources and for refugees and migrants to study theology even if they could not produce the necessary certificates of qualification.

Francis called on theologians “to foster in ever new ways the encounter of cultures with the sources of revelation and of Tradition.” He called for working toward a “theological Pentecost” that permits the women and men of our day to hear in their own language “a Christian reflection that responds to their search for meaning and a full life.”

For this to happen, he said, “it is necessary to start from the Gospel of mercy” and “it is also necessary to seriously take history into the heart of theology as an open space of encounter with the Lord.”

Francis emphasized the need for “theological freedom” and said that “without the possibility of experimenting new ways nothing new is created, and one does not leave space to the newness of the Spirit of the Risen One.” He declared that scholars “should be able to go forward with freedom, and then, in the final instance, it will be the Magisterium that will say something” but, he insisted, “one cannot do theology without this freedom.”

He underlined “the indispensable contribution that women are giving, and can give to theology, and said their participation should be sustained.” He complimented the faculty in Naples for doing just this; he noted the “good participation” of women as both professors and students here.

Francis called on theologians “to foster in ever new ways the encounter of cultures with the sources of revelation and of Tradition.”

Francis began his talk by recalling that the Mediterranean has always been “a place of transit, of exchanges and at times of conflict” and observed that this region today “raises a series of questions that are often dramatic.” Questions of the kind that were raised in the document on “Human Fraternity” that he signed in Abu Dhabi in February with the Grand Imam of Al Azhar: “How can we together protect the human family? How can we foster a peaceful and tolerant coexistence that becomes an authentic fraternity? How can we get our communities to welcome the other and the one who is different from us because she or he belongs to a different religious and cultural tradition? How can religions be paths of fraternity instead of walls of separation?”

These questions demand “a generous commitment of listening, study and discussion to promote processes of liberation, peace, fraternity and justice,” Pope Francis told an audience sheltering under umbrellas from the blazing sun. Among those present was the cardinal archbishop of Naples, Crescenzio Sepe; the Father General of the Jesuits, Arturo Sosa; and the Vice-Chancellor of the Faculty and Provincial Superior of the Jesuits in Italy, Gianfranco Matarazzo.

In the context of the Mediterranean, Pope Francis called for “a theology of acceptance and of dialogue.” (He used the Italian word accoglienza that can mean “acceptance,” “welcome” or “hospitality”). He said theology “is called to develop an authentic and sincere dialogue with the social and civil institutions, with the university and research centers, with religious leaders, with all women and men of good-will, for the building in peace of an inclusive and fraternal society and for the safeguarding of creation.”

The pope recalled that “in dialogue with the cultures and religions, the church announces the Good News of Jesus and the practice of evangelical love which he preached.”

He explained that “dialogue is above all a method of discernment and of the announcement of the Word of love that is addressed to every person.” He asserted that the schools of theology “are renewed through the practice of discernment and through a dialogical way of proceeding” and called for dialogue “not only in posing the problems but also in searching together for ways to resolve them.”

“In dialogue with the cultures and religions, the church announces the Good News of Jesus and the practice of evangelical love which he preached.”

He said this dialogue should be capable of integrating “the living criterion” of the passion, death and resurrection of Jesus with “reading in reality, in creation and in history the theological connections, signs and references.” This is necessary “to understand how the historical and created reality is questioned by the revelation of the mystery of the love of God.”

He described this dialogue as a “double movement”: a “movement from below towards the On-High” through listening to and discernment of every human and historic instance, and “a movement from on high (Jesus on the Cross) towards the below to discern the signs of God in the history and to understand in a prophetic way the signs of the anti-Kingdom that disfigure the soul and human history.”

Pope Francis emphasized the need to be “docile to the signs and action of the Risen Christ and to His Spirit of peace.” He said, “This docility involves a style of life and announcement without a spirit of conquest, without the will to proselytize and without the aggressive intent to disprove.” It requires one “to enter into” the culture, history, lives and religious traditions of peoples like Charles de Foucauld, the monks of Tibherine and Bishop Pierre Claverie of Oran in Algeria, and many others who died “with the name of Jesus on their lips and mercy in their hearts.”

In this context, Pope Francis said theology “should also look to non-violence as a horizon” and take it as one of its “constitutive elements.” He pointed to the writings and praxis of Martin Luther King Jr. and other “peace makers,” including former students of this pontifical faculty of theology as resources in this field.

Pope Francis emphasized the need to be “docile to the signs and action of the Risen Christ and to His Spirit of peace.”

His reference to non-violence and Martin Luther King did not go unnoticed. As Pope Francis addressed the audience many were conscious of the dangerous escalation of tensions between the United States and Iran the previous evening. According to U.S. media, President Trump had first given the order for limited strikes on targets in Iran and then pulled back at the last moment.

Last Sunday, Francis appealed for peace in that area of the world, and many were wondering if he would say something today given that Tehran is only 2,000 miles from Naples, but he did not.

Francis acknowledged that “dialogue is not a magic formula” but insisted that dialogue “certainly helps to renew theology” when theology “assumes it seriously, when it is encouraged and favored by teachers and students, together with the other forms of knowledge and with the other religions, and above all Judaism and Islam.”

Pope Francis: “Me first” logic is not Christian in response to migrants and refugees
Gerard O’Connell

He said dialogue can also be “the theological hermeneutic” or interpretive key “in a specific time and place,” like the Mediterranean—“that space between Europe, Africa and Asia,” in the third millennium, “where the lack of peace has produced many regional and world imbalances” and “whose pacification through the practice of dialogue can contribute greatly to starting processes of peace and reconciliation.”

Pope Francis emphasized that “dialogue as a theological hermeneutic” presupposes and involves “conscious listening” and, in the Mediterranean it means listening to the history, the cultures and the lived reality of the peoples and of the great monotheistic religions in order “to grasp not only the wounds but also the potential [for solutions].” He underlined the need to listen to “the young people” and also to understand how “the Christian communities and individual prophetic experiences” were able to incarnate the Gospel in sometimes conflictual, and often minority situations.

He reminded his listeners that “Jesus announced the kingdom of God by dialoguing with ever type and category of persons of the Judaism of his time” as well as others like the Samaritan woman, and said: “His divine listening to the human heart opens this heart to receiving in its turn the fullness of the Love and the joy of the Truth.”

Theologians need to be freed and liberated from their fear psychoses.

I am intrigued by Francis’s reference to “history.” What new element or new understanding or new emphasis does this signal?

Religion is about fear, the continual reinforcement of fear.
If theology were free of religion, we would likely have a much better world.