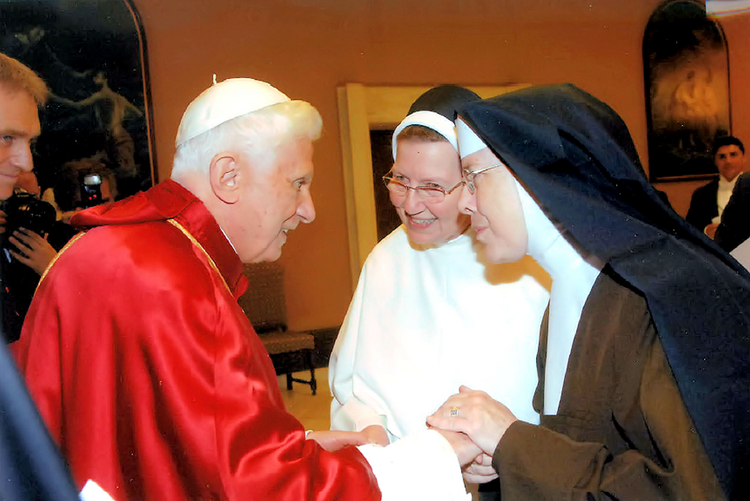 Almost 30 years ago, congregations of Catholic sisters in the United States split into two groups: the Leadership Conference of Women Religious and a newly-formed group that would become the Council of Major Superiors of Women Religious.

The fault lines occurred around issues of what could and could not be considered authentic religious life in the aftermath of the Second Vatican Council. In some ways, the split was one of the definitive events for a generation of Catholic sisters. Even today, those sisters willing to talk about it publicly often do so with audible pain and sadness.

The harrowing story of French nuns killed by the guillotine returns to the Metropolitan Opera
Leo J. O’Donovan, S.J.

And many of the young women who've become sisters in the ensuing decades are confused about what happened, exactly. They say they have caught pieces of the story, but older sisters don't really talk about it and an authoritative history doesn't exist. But these younger sisters are clear on one thing: Communion between LCWR and CMSWR communities is crucial for the future of women's religious life in the U.S.

And they just might be the generation to bring that to fruition.

Over the last few years, the national gathering, Giving Voice -- described as an event for Catholic women religious under 50 to build bridges across communities -- has made interconference communion one of its central goals. The organization is open to sisters from both conferences, but historically it's been dominated by women from LCWR communities.

Of the three women planning this year's event in St. Louis in late June -- Franciscan Sister of Perpetual Adoration Sister Julia Walsh is the only extrovert. Her giggling, effervescent way of speaking is markedly different from Apostle of the Sacred Heart of Jesus Sister Kathryn Press' wispy but deliberate voice or Dominican Sister of Mission San Jose Sister Mary Therese Perez's quiet and measured delivery.

But when they're together, the trio has obvious chemistry. They are constantly affirming one another, laughing at inside jokes and gently encouraging each other to speak up.

Sisters Walsh and Perez are members of LCWR and Sister Press's community maintains membership in both LCWR and CMSWR.

Getting CMSWR communities to send sisters to the national gatherings has been Giving Voice's greatest challenge in terms of creating unity, Sister Perez said. But they're making progress. This year, two Franciscan Sisters of the Eucharist, a CMSWR community, plan to attend.

"I think that was able to occur because their community's in relationship with my community," Sister Walsh said.

All three women agree that it's only through individual relationship building that changes can be made at the institutional level.

Sister Walsh said she often feels that her ability to make friends with CMSWR sisters is stifled by the very fact of the two-conference construct. The leadership of the two conferences sometimes attend each other's annual assemblies, but -- with the exception of a canon law workshop that took place in Chicago earlier this spring -- they don't host joint events for members or member congregations.

"I had some sisters ask me if anyone in our community had ever told me I can't go and be friends with sisters in these other congregations. And it's not that people are saying no, it's just that the structures don't provide the freedom. I feel like I don't even know how I would," Sister Walsh said. "So that's where I feel like it's cramping my style," she added, laughing.

Sister Perez, a religion teacher, said that whenever she sees CMSWR sisters at third-party events like the FOCUS or Los Angeles Religious Education conferences, she makes it a point to talk to them and she also gives them her phone number and email address, urging that they keep connected.

In addition to limited access, there's also the problem of inherited prejudices. Because while some older sisters may be loath to talk about the initial split, their younger sisters have still gleaned certain things about it.

"I don't have any particular memories of hearing negative things," Sister Walsh said. "I don't know how I picked up the biases that I did. But I'm aware that they're in me, and that feels like a hinderance."

Sr. Susan Francois, a 47-year-old Sister of St. Joseph of Peace, echoes that sentiment. As a novice, she attended a weekly novitiate program facilitated by the Religious Formation Conference -- which included novices from CMSWR communities. No one ever told her what to think about these sisters, but she found she'd already developed concerns similar to Sister Walsh's.

"If I walked into a formation event with sisters that were in CMSWR, I would be wondering, 'Do they think I'm a real sister? Do they judge me?' And they were probably thinking things about me from those stereotypes," she said. "From our generational perspective, the sadness is that, because of that split, we didn't have natural ways of getting to know each other."

But finding ways to get to know each other is exactly what today's young sisters are focused on and Sister Francois believes there's a new sense of what's possible, thanks, in part, to the Vatican's recent investigations of U.S. sisters in general and LCWR in particular.

"I think that for those of us in LCWR congregations, the way that the doctrinal investigation and the apostolic visitation were resolved through relationships, staying at the table, nonviolent dialogue, engagement and encounter gave us the path forward," she said. "And if we were able to do that with church hierarchy that was in a confrontational mode with us, how can we not do that with our sisters?"

Young sisters also know the time for reconciliation is ripe because they're reading the signs of the times.

"In 30 years, there's only going to be so many of us in the United States, and we need to do some work now so that we know how to lean on each other and be real strong sisters to one another in the future," Sister Walsh said. "That's only going to make our vocations stronger, our form of religious life stronger. It's going to make the church, ultimately, stronger and healthier."

"We can appreciate the diversity of ways God invites people to be faithful. We can model how to be a healthy church," she added.

To which Sister Perez snapped her fingers and Sister Press exclaimed, "Amen!"