Pope Francis tells Vatican diplomats: don’t ‘criticize the pope behind his back’

Pope Francis tells Vatican diplomats: don’t ‘criticize the pope behind his back’ 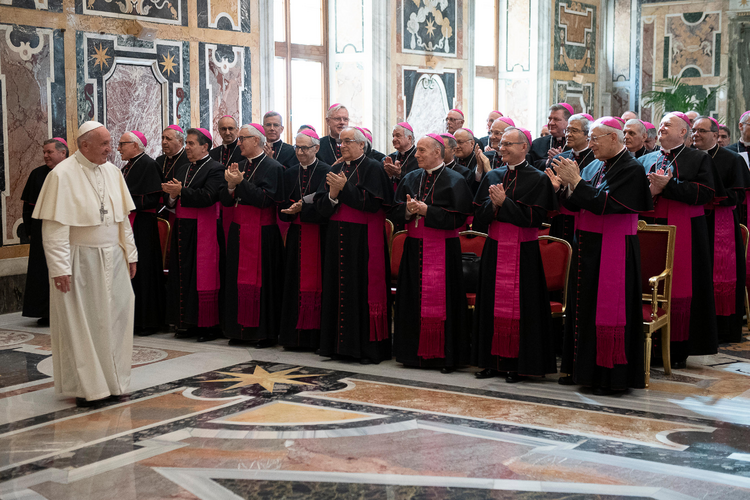 Pope Francis meets with nuncios from around the world at the Vatican June 13, 2019. (CNS photo/Vatican Media)

“It is inconceivable to be a pontifical representative and to criticize the pope behind his back, to have a blog or even to unite himself to groups hostile to him, to the [Roman] curia and to the church of Rome,” Pope Francis stated frankly in a text delivered to the some 100 nuncios and Holy See diplomats who represent him in countries on every continent.

Aware of the temptations they face in their diplomatic careers, Francis presented them with what he called “a decalogue” or 10 commandments, which he said “are in reality addressed through you also to your collaborators and, indeed, to all the bishops, priests and consecrated persons that you encounter in every part of the world.”

The pope has often said that the devil comes in through the wallet, and he advised these clerical diplomats “to be prudent in accepting gifts that are offered to cloud our objectivity and, in some cases sadly, to buy our liberty.” He said, “No gift of whatever value should ever make us slaves.”

It was his third meeting with all the nuncios and other papal representatives since his election as pope on March 13, 2013. He met them first in June of that same year and a second time in 2017.

“It is inconceivable to be a pontifical representative and to criticize the pope behind his back,” Pope Francis stated frankly in a text delivered to some 100 nuncios and Holy See diplomats.

He began the meeting in the Vatican’s Clementine Hall by praying for the repose of the soul of Archbishop Léon Kalenga Badikebele, a priest from the Democratic Republic of the Congo and the nuncio to Argentina, who had been seriously ill for some time and died yesterday.

Then, instead of reading his prepared address, he spent the next 90 minutes answering questions raised by the nuncios in a behind-closed-doors private session.

In his written text, which he had distributed to the nuncios, he began by saying that, first and foremost, “the nuncio is to be a man of God,” one who wishes “to follow God in all and for all,” one who “lives for the things of God and not those of the world.” He must be a person “who does not go around or cheat his neighbor” nor “allow himself to gossip or speak badly” about others but “keeps his mind and heart pure, preserving his eyes and ears from the filth of the world” and “does not allow himself to be deceived by worldly values.”

Second, he said, being a nuncio or papal representative, “he must not represent himself but the church and in particular the Successor of Peter.” But, Francis said, “he ceases to be ‘a man of the church’ when he begins to treat badly his collaborators, the staff, the sisters and the community of the nunciature.” Rather he is to be a father and a pastor to them.

Pope Francis advised these clerical diplomats “to be prudent in accepting gifts that are offered to cloud our objectivity and, in some cases sadly, to buy our liberty.”

Earlier this year, the church officials pushed back against reports of poor working conditions at the Vatican’s U.N. mission. An article published in March by Crux, detailed allegations by several former employees of the Holy See’s Mission to the United Nations who accused their former boss, Archbishop Francis Chullikatt, of mistreatment and corruption. The archbishop was the permanent observer of the Holy See to the U.N. from 2010 to 2014 and has served as the nuncio to Kazakhstan and Tajikistan since 2016.

Pope Francis told the nuncios, “It is bad to see a nuncio who seeks luxury, brandmark clothes and objects, in the midst of people deprived of the necessities [of life].” On the contrary, Francis said, to be “a man of the church” requires “humility” to present the face, the teachings and the positions of the church, “not his own personal convictions,” and demands that he “defend courageously the church before the forces of evil that seek always to discredit, to defame and calumniate her.”

Third, the pope said, the nuncio must be “a man of apostolic zeal,” whose task is “to illuminate the world with the light of the Risen One, and to bring Christ to the ends of the earth.” He warned the nuncios against the danger of “falling into timidity, or into the tepidity of political or diplomatic calculations or even ‘the politically correct.’”

A fourth trait of the nuncio is that he should be “a man of reconciliation,” “a man of mediation, communion, dialogue.” He should remain “impartial and objective” so that the different parties may find in him “the just arbiter” who seeks sincerely to “to defend and protect only justice and peace.” He must also be “a man of communication” who represents “a superior authority to the benefit of all.”

Pope Francis told the nuncios, “It is bad to see a nuncio who seeks luxury, brandmark clothes and objects, in the midst of people deprived of the necessities [of life].”

His task is to support the bishops and clergy and “not put himself above” the bishops in the exercise of their powers but to sustain them with fraternal and discreet counsel. Pope Francis said that if a nuncio “closes himself in the nunciature and does not meet people” then he “betrays his mission,” which is to represent the face of the universality and catholicity of the church to people.

The fifth task of the nuncio is to be “the man of the pope.” He represents not himself but “the Successor of Peter and acts on his behalf toward the local church and governments.” He cannot be “a hypocrite” but must act as “a go-between, or a bridge of connection between the Vicar of Christ and the person to whom he is sent in a particular area.”

Being a nuncio, the pope said, requires “availability, flexibility, humility, impeccable professionalism, ability to communicate and to negotiate” and a readiness to freely move around. He must also study and keep himself up to date, so he knows the thinking of the one he represents and knows the country in which he lives and is able to report on this to the pope.

Sixth, the pope said, “the nuncio is [to be] a man of initiative.” He must have the ability to move and adapt to the demands of the moment and “not fall into mental, spiritual or human rigidity.” He should be a man who is “positively curious, full of dynamism and of enterprise.” Above all, he must be a pastor, living in the world but not of the world.

“The life of prayer,” the pope said, “is that light which illumines all the rest and all the work of the nuncio and of his mission.”

Francis said a seventh important trait of the nuncio is that he be “a man of obedience.” He must remain obedient to the call “to follow Jesus.” The pope reminded them that “obedience to God is not separated from obedience to the church and to the superiors.” He said, “A nuncio who does not live the virtue of obedience is like a traveler who loses his compass and risks failing to reach the goal.”

Next, Francis highlighted the eighth “commandment”: The nuncio must “be a man of prayer.” Without a solid prayer life, he said, “the nuncio risks failing to have all the previous requirements. Without prayer we become mere functionaries, always discontented and frustrated.”

“The life of prayer,” he said, “is that light which illumines all the rest and all the work of the nuncio and of his mission.”

The ninth requisite for the nuncio is to “be a man of active charity.” As he has often said before, the pope underlined that “if we really wish to meet Christ, it is necessary that we touch the wounded body in that of the poor,” which links us to the sacrament of the Eucharist. He insisted that the papal representatives, the nuncios and diplomats, “must interest himself with the problems of peace, of progress and collaboration of peoples” for the welfare of the human family. He said the nuncio “must spend himself in charitable works, especially towards the poor and marginalized.”

The 10th commandment of Francis to the nuncios was one that is also central to his own vision of ministry: “The nuncio is [to be] a man of humility.” In this context, the quoted “the litany of humility” from the saintly Cardinal Rafael Merry Del Val (1865-1930).

Having delivered his “decalogue” to the nuncios, which resembled the pre-Christmas addresses to the Roman Curia, Francis greeted each of them individually, very many of whom he now knows well.

The meeting with Pope Francis was the centerpiece a three-day visit of the nuncios to the Vatican, where they are also meeting with senior officials and among themselves in regional groups. Pope Francis will celebrate Mass for them on Saturday morning and later have lunch with them before they return home to their respective missions.

They want him to fail because so many of them are deeply closeted. The Closet is a terrible place from which to govern the Church.

Until this elephant in the sacristy is faced with honesty and integrity, the future of the church will remain bleak. Continued duplicity and hypocrisy will stifle any attempt at new beginnings. Frederic Martel has documented this so well in his book "In the Closet of the Vatican" ... why are his revelations not being taken into account?

By all means, don't criticize the bishops and the Pope behind their backs. Criticize them openly and to their faces. Its the adult thing to do.

Will Nier
11 months 3 weeks ago

The Pope is correct in this manner for a house divided against itself cannot survive.

The headline, do not criticize the pope behind is back, is not supported in the 10 rules you report in the body of the document. It seems to be a false headline