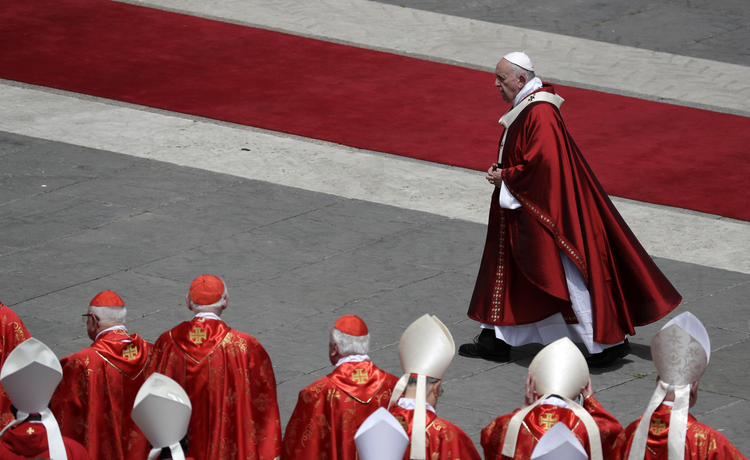 Pope Francis walks past cardinals after celebrating a Pentecost Mass in St. Peter's Square, at the Vatican, Sunday, June 9, 2019. The Pentecost Mass is celebrated on the seventh Sunday after Easter. (AP Photo/Gregorio Borgia)

VATICAN CITY (AP) — Pope Francis on Sunday lamented what he called a "culture of insults" enabled by social media and warned against nationalism and other "exclusivist ideas" that he said contrast with a Christian mission to foster harmony.

In his homily during Pentecost Mass Sunday in St. Peter's Square, Francis also decried that "the more we use social media, the less social we are becoming."

"The more we use social media, the less social we are becoming."

He warned of the temptation to cling to "our little group, to the things and people we like," concluding that it's only a "small step from a nest to a sect, even within the church."

The Pentecost Testimony of a Mad, Fed-Up Catholic
Elizabeth Scalia

The pope said that "nowadays it is fashionable to hurl adjectives and, sadly, even insults" in what's tantamount to "a culture of insults." He recommended responding "to malice with goodness, to shouting with silence, to gossip with prayer, to defeatism with encouragement."

He also warned against the Catholic church's neglecting its mission to spread joy, instead becoming an organization with propaganda as its mission.

The Vatican after Mass released a papal message about the church's mission in the world. In it, Francis echoed a call a century ago by Pope Benedict XV, right after the devastation of World War I, for "an end to all forms of nationalism and ethnocentrism." He also cited a reminder by that same pope that "the church's universal mission requires setting aside exclusivist ideas of membership in one's own country and ethnic group."

Said Francis as he defined the church's mission today: "No one ought to remain closed in self-absorption."

Social media can help us to be human and social towards fellow humans and the environment.

"Pope Francis on Sunday lamented what he called a "culture of insults" enabled by social media and warned against nationalism and other "exclusivist ideas" that he said contrast with a Christian mission to foster harmony."

You mean like making exclusionary statements to media referring to certain groups of people's input on important theological discussions, as the "strawberry on the cake", rather implying that the necessary and important input came from the people outside of this group. Or perhaps Pope Francis means when leaders in the world refer to certain governments, as elderly females in a derogatory fashion, such a referring to them, as infertile grandmothers when seeking to scold and insult them. Or perhaps Pope Francis means when people describe only certain groups of people in a demeaning and insulting manner when they seek to be treated the same as everyone else, both in and out of their religions? This reminds of when a leader stated such people are acting unnatural because their wanting to be treated the same as others, and then described them as acting like an example of "Machismo in a skirt." Or maybe Pope Francis is referring to leaders who, without any gospel, or moral, or scientific reasoning, describe the subversion and oppression of half our population as "Just Discrimination" simply because they don't want to face the discomfort of having to change their ways and admit their sins and their organization's sins of senseless abuse and hatred for centuries.

Again Pope Francis - it is time to start taking your own advice and the sooner the better!