Pope Francis is visiting Romania. Here’s what to expect. 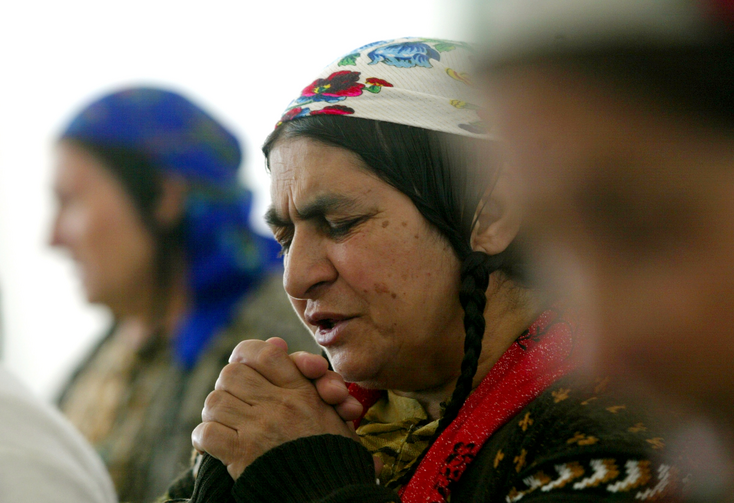 A Romanian Roma woman prays in a church in Sibiu some 173 miles northwest of Bucharest, Romania, March 20, 2005. Pope Francis is scheduled to visit Romania May 31-June 2. (CNS photo/Bogdan Cristel, Reuters)

“I come as a pilgrim and a brother,” Pope Francis said in a video message to the people of Romania on the eve of his visit to the largest of the Balkan states and a predominantly Orthodox country.

He recalled that the bonds of faith have united Catholic and Orthodox believers since the time of the Apostles and said he looked forward to meeting with Orthodox leaders as well as the Catholics of this “beautiful and welcoming land.” He noted that the Orthodox and Catholics both have many martyrs and that during his visit he will beatify seven Greek-Catholic bishop martyrs.

His visit, from May 31 to June 2, involves a delicate balancing act with three dimensions. There is a state dimension since he visits a republic that regained its independence in 1990; a major ecumenical dimension because 86 percent of the population are Orthodox; and a pastoral dimension because he goes to confirm the Catholics who are divided into two communities: the Latin rite (4 to 6 percent) and Greek Catholic rite (less than 1 percent).

“I come as a pilgrim and a brother,” Pope Francis said in a video message to the people of Romania on the eve of his visit.

Romania stands at the crossroads of Central, Eastern and Southeastern Europe. A country roughly the size of Germany, it shares borders with Bulgaria, Ukraine, Hungary, Moldova and Serbia and has a coastline along the Black Sea.

Over the centuries, Romania was ruled by different empires, including the Roman, Ottoman and Austro-Hungarian. It fought alongside Russia in the Russian-Turkish war and gained independence from the Ottoman Empire in 1877. It sided with the Allies in World War I and in the subsequent peace treaty gained Transylvania. In World War II, it initially sided with Germany but changed sides as the Red Army arrived. It fell under communist rule in the post-war period and was governed by Nicolae Ceaușescu from 1965 until a bloody uprising that left over 1,100 people dead brought his downfall and execution, along with this wife Elena Ceaușescu, on Christmas Day 1989.

Romania established diplomatic relations with the Holy See in 1920, but ties were broken after World War II when communists came to power and only restored again in 1990 after the country Romanian Revolution.

Pope Francis will spend three days here: the first in Bucharest, his base for the entire visit; the second involves visits to the Marian shrine at Sumuleu-Ciuc, which Hungarians call Csiksomlyo, and the country’s second largest city, Iasi. He will spend his third day in Blaj, where he will beatify seven martyr bishops of the Eastern-rite Greek Catholic Church who died under harsh communist persecution between 1950 and 1970.

Francis is expected to refer not only to the country’s history but also its two major concerns today: poverty and emigration.

The state dimension of his visit will unfold on the first day in Bucharest, a city of some two million people that dates back to 1459 and was once known as “Little Paris.” It has been the country’s capital since 1862 and is its cultural, financial and commercial center. There, at the presidential palace, Francis will meet the country’s president, Klaus Iohannis, and its first-ever female prime minister, Viorica Dăncilă, before addressing the nation and its political and civic authorities.

In a nationally televised speech, Francis is expected to refer not only to the country’s history but also its two major concerns today: poverty and emigration. Romania’s poverty levels are among the highest in Europe—around 40 percent and even higher in the rural areas where 45 percent of the population live. Youth unemployment stands at 15 percent. Since Romania joined the European Union in 2007, some 16 percent of the population—3.6 million people, most of them young—have emigrated to other E.U. countries.

The ecumenical dimension of the pope’s visit will be in the spotlight on the afternoon of that same day when he meets Patriarch Daniel, the leader of the Romanian Orthodox Church, for the first time. Afterward, he will meet with the Orthodox church’s permanent synod, which he will also address before praying with the patriarch at the capital city’s new Orthodox cathedral.

Since Romania joined the European Union in 2007, some 16 percent of the population—3.6 million people, most of them young—have emigrated to other E.U. countries.

St. John Paul II became the first pope to visit Romania in May 1999 and was given a tremendous welcome because of his role in the fall of communism. His relationship with Patriarch Teoctist was particularly friendly; they signed a common declaration pledging to work together to strengthen relations between Romanian Catholics and Orthodox Christians. There was such evident goodwill between the two leaders that at the end of the celebration of Mass in Bucharest the crowd chanted, “Unity, unity.”

The situation has changed since then, and there are some less ecumenically minded bishops in the synod today.

Father Francisc Dobos, the spokesman for the Bucharest Catholic archdiocese, told reporters in Rome that while the dialogue between the Eastern Orthodox and Catholic churches is “open and peaceful,” it is “more rigid” than in the past and perhaps “less fruitful.” Orthodox relations are particularly strained with the Greek Catholic Church, whose members suffered greatly under communist rule in Romania and whose properties were confiscated and given to the Orthodox.

Bishop Brian Farrell, the secretary for the Pontifical Council for the Promotion of Christian Unity, told America, “Our relationship with the Romanians is active and positive; they take part in all the ecumenical activities; they are members of the [World Council of Churches] and quite active there too.” He noted that Patriarch Daniel once worked for the W.C.C., as a professor at its Bossey ecumenical institute and, before he became patriarch, led the Romanian Orthodox delegation to the inauguration of Pope Benedict XVI.

While the dialogue between the Eastern Orthodox and Catholic churches is “open and peaceful,” it is “more rigid” than in the past and perhaps “less fruitful.”

“The Orthodox will always be grateful to John Paul II because he opened up so many doors,” Patriarch Daniel said during a lunch for the ecumenical delegations at the inauguration for Benedict in April 2005. “But we never understood him; he was a philosopher. But when Pope Benedict speaks we understand him perfectly because he’s a theologian.”

Bishop Farrell, who met the patriarch recently, said the Romanian Orthodox “are very open and friendly to Pope Francis,” and the patriarch told him he “was very much looking for to his visit.”

The pastoral dimension of Francis’ visit to the Catholics of this land begins after his meeting with the Orthodox.

In a pastoral letter to his flock on the eve of the visit, Bishop László Böcskei of Oradea Mare wrote that “the Holy Father comes to embrace” and “to encourage all the Catholic communities that have persevered in difficult times, kept the faith and remained faithful to Rome and the successor of Peter.”

Pope Francis will celebrate three Masses during his visit: the first in the Catholic Cathedral of St. Joseph in Bucharest on May 31, just as John Paul II did. The next morning, he will travel some 200 miles by plane to the Marian shrine Şumuleu Ciuc in Eastern Transylvania, at the foothills of the Carpathian Mountains, the first pope to visit and celebrate Mass there. On his final day, he will celebrate Mass in Blaj, a town located some 200 miles from Bucharest, which is the main religious and cultural center of the Romanian Greek Catholic church.

The beatification of the seven bishops will be a moment of glory for the members of this church who have suffered so much for their loyalty to the See of Peter.

The Hungarian Catholics are particularly enthusiastic about Pope Francis’ visit to this Marian shrine, which is a symbol of spiritual unity for them. In fact, more than half of Romania’s Catholics are ethnically Hungarian and are concentrated in Transylvania, which belonged to Hungary until 1920. But after World War I it passed into Romanian hands and in 1947 became part of Romania. The Hungarians who live there are closely linked to Hungary by language, historical cultural heritage and family ties; they use Hungarian liturgical texts and many have dual citizenship.

Bishop András Veres, the president of the Hungarian Bishops’ Conference, told his country’s Catholic news agency: “I consider the visit of the Holy Father to Csíksomlyó a historic event.... For the Hungarians of that region, Pope Francis’ arrival represents a great joy.” He announced that all the Hungarian bishops will attend the celebration, and he encouraged “every Hungarian to do likewise so that the event will be a great feast for all the Hungarians at this ancient sanctuary.” Special trains from Hungarian and Romanian cities will bring people to the shrine.

A message to Pope Francis: Be wary of right-wing populists when you visit Romania
Marc Roscoe Loustau

After celebrating Mass at the shrine, Pope Francis will travel by plane another 100 miles to Iasi in Eastern Romania. After a private prayer service in the cathedral, he will meet with thousands of young people and families from both Romanian and Hungarian communities and all faiths and is expected to encourage them to work together in unity and solidarity.

On his last day in Romania, Pope Francis will return to Transylvania to celebrate Mass in Câmpia Libertății (“the Field of Liberty”) in Blaj, in the place where in 1848 some 40,000 Romanians gathered to protest Transylvania becoming a part of Hungary. There he will beatify seven Greek Catholic bishops who were imprisoned and died as martyrs after the Second World War when they refused to join the Orthodox Church. Their church’s properties were confiscated by the government, and many other clerics were put in prison.

The beatification of the seven bishops, one of whom was secretly made a cardinal by Pope Paul VI, will be a moment of glory for the members of this church who have suffered so much for their loyalty to the See of Peter.

Later that afternoon, Francis will meet the Roma community of Blaj, before taking the flight back to Rome.