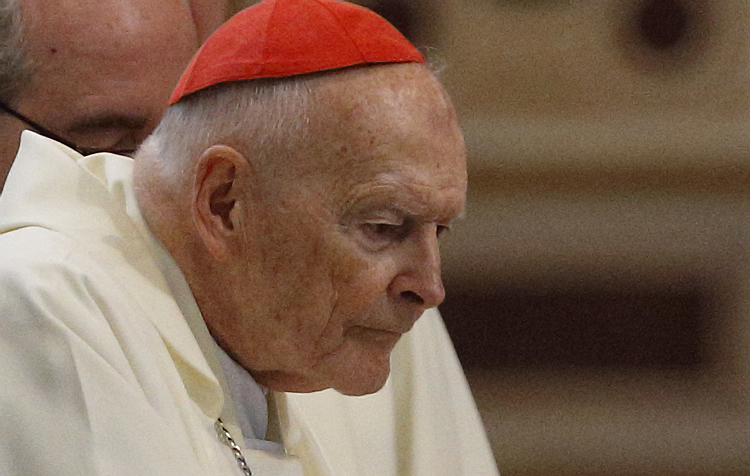 Then-Cardinal Theodore E. McCarrick attends a Mass in Rome. The prelate, no longer a member of the College of Cardinals, has been accused of abusing a minor decades ago when he was a priest and being sexually inappropriate with seminarians in more recent years as a bishop. He has denied the allegations but his case roiled the U.S. Catholic Church in 2018 amid a growing abuse crisis. (CNS photo/Paul Haring)

VATICAN CITY (CNS) -- Pope Benedict XVI had imposed restrictions on the public ministry of former Cardinal Theodore E. McCarrick in 2008, but they were not formal sanctions and were not followed strictly, even during the papacy of Pope Benedict himself, McCarrick's former secretary said.

Msgr. Anthony J. Figueiredo, who was the former cardinal's secretary for nine months in 1994-1995, but continued to assist him from Rome, released extracts from correspondence May 28, saying he wanted the truth out about what was known about McCarrick, when and by whom.

Besides knowing about the restrictions himself, the monsignor also said he had evidence that recently retired Cardinal Donald W. Wuerl of Washington knew about them, as did Cardinal Giovanni Battista Re, then-prefect of the Congregation for Bishops, Cardinal Tarcisio Bertone, then-Vatican secretary of state, and Archbishop Pietro Sambi, who was nuncio to the United States at the time.

Msgr. Figueiredo said he decided to publish online excerpts of correspondence in his possession -- available at http://thefigueiredoreport.com/ -- after attempting "since September 2018 to share and discuss these with the Holy See and other church leaders." He did not publish the full texts of any of the correspondence or emails he quoted online.

The monsignor, who in October was suspended from driving in England for 18 months after pleading guilty for drunk driving and hitting a car driven by a pregnant woman, said in his online report that "the hierarchy's abuse of authority and cover-up, in their various and serious manifestations, have inflicted consequences upon me," including by "seeking consolation in alcohol."

Pope Francis removed McCarrick from the priesthood in February after he was found guilty of "solicitation in the sacrament of confession and sins against the Sixth Commandment with minors and with adults, with the aggravating factor of the abuse of power."

After an initial investigation in the Archdiocese of New York, the Vatican ordered McCarrick's removal from ministry last June. A month later, Pope Francis accepted his resignation from the College of Cardinals.

In August, Archbishop Carlo Maria Vigano, a former nuncio to the United States, published a document calling on Pope Francis to resign because, he claimed, Pope Francis had known there were sanctions on McCarrick and not only did he lift them, he allegedly made McCarrick a trusted confidante and adviser on bishops' appointments in the United States.

Archbishop Vigano later clarified that Pope Benedict issued the sanctions "privately" either because McCarrick was already retired or because the pope thought "he was ready to obey."

Msgr. Figueiredo quoted a letter he says he was asked to translate into Italian for McCarrick. In the letter to Cardinal Bertone, Vatican secretary of state under Pope Benedict, McCarrick acknowledged one case of "an unfortunate lack of judgment," without explaining further.

McCarrick also has been accused of regularly inviting too many seminarians to his New Jersey shore beach house so that one of the young men would have to share a bed with him.

In the letter to Cardinal Bertone, McCarrick wrote, "I have always considered my priests and seminarians as part of my family, and just as I have shared a bed with my cousins and uncles and other relatives without thinking of it being wrong, I had done this on occasion when the Diocesan Summer House was overcrowded. In no case were there minors involved, but men in their twenties and thirties."

In the same letter, Msgr. Figueiredo said, McCarrick told Cardinal Bertone, "I have never had sexual relations with anyone, man, woman or child, nor have I ever sought such acts."

The letter to Cardinal Bertone, according to the monsignor, was written after Archbishop Sambi, the nuncio, had presented McCarrick with a letter from Cardinal Re of the Congregation for Bishops apparently ordering him not to " accept any public appearances or talks without the express permission of the apostolic nuncio or the Holy See itself."

Msgr. Figueiredo said the letter from Cardinal Re should be in the files of the Congregation for Bishops.

Cardinal Marc Ouellet, current prefect of the congregation, in a response to Archbishop Vigano's allegations, said in October that McCarrick "was strongly exhorted not to travel and not to appear in public so as not to provoke further rumors" about is sexual misconduct.

However, Cardinal Ouellet said, "it is false to present these measures taken in his regard as 'sanctions' decreed by Pope Benedict XVI and annulled by Pope Francis. After reexamining the archives, I certify that there are no such documents signed by either pope."

Cardinal Ouellet's letter was published a day after the Vatican announced that the pope had ordered a "thorough study of the entire documentation present in the archives of the dicasteries and offices of the Holy See regarding the former Cardinal McCarrick in order to ascertain all the relevant facts, to place them in their historical context and to evaluate them objectively."

As of May 28, the report had not been published.

Msgr. Figueiredo said the information on his website had been reviewed by "lawyers and journalists."

He also said, "Additional documents and other sensitive correspondence from McCarrick that offer further background on these and other issues are in my possession. They will form the basis of further possible reports if this contributes to the good of the ongoing investigation and efforts to address the abuse crisis, love of holy mother church, and ultimately the salvation of souls."

America certainly is helping Catholics and others learn about how the Vatican and Francis function as accusations and convictions regarding sexual abuse in our ranks. That being said, I believe no photos of those convicted should be published wearing clerical clothing or garments associated with any office held. So it is distressing to see photos of Mr. McCarrick attired in this manner.
Fr. Bob Nee

"Pope Francis removed McCarrick from the priesthood in February after he was found guilty of ... sins against the Sixth Commandment ... with minors and with adults ... "

He murdered minors and adults?? How many, for heaven's sake?

Ab.Vigano had accused Pope Francis of lifting a "canonical sanctions", the Media caught him lying and his false accusation against Pope Francis collapses on its own. He later clarified that it was only a private request, but will you accept an error in terminology coming from Ab.Vigano who is a Canon lawyer? Now, the secretary of McCarrick affirmed that it was just a private request.So, this further testimony do not vindicate Ab.Vigano but on the contrary further expose him that he fabricated lies in his original testimony accusing Pope Francis of a non existent canonical sanctions.
So, who inspired Ab.Vigano to accused Pope Francis with falsehood? Holy Spirit or Satan the Great Accuser based on Lies.(John8:44)