The Editors: Love, not fear, should guide our conversations on religious freedom and L.G.B.T discrimination 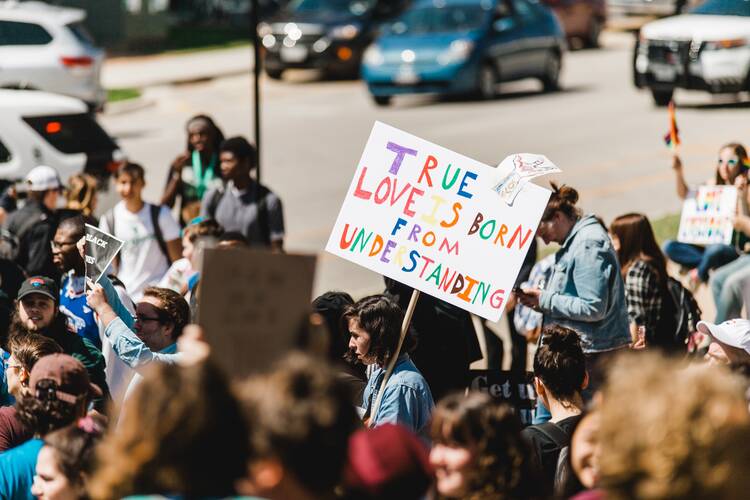 Photo by Heather Mount on Unsplash

Opponents of a religious liberty bill working its way through the Texas state legislature have characterized the measure as a “license to discriminate” and a “bigot bill.” They argue that Senate Bill 17, which passed in the Republican-controlled Senate in April and awaits a vote in the House of Representatives, will give everyone from doctors to barbers the right to discriminate against L.G.B.T. people and others. Major employers in the state, including Amazon and Facebook, have warned legislators that the bill would damage Texas’ business-friendly reputation.

In reality, the bill is modest in its scope. The Texas Occupational License RFRA prohibits state licensing agencies from adopting rules that burden the free exercise of religion and allows professionals to cite their “sincerely held religious beliefs” as a defense for denying services if their license is challenged. The defense could not be used by first responders or in situations where the refusal of service could result in death or serious physical harm. The Texas Catholic Conference of Bishops registered its support for the bill, and one Democratic state senator, Eddie Lucio, crossed the aisle to vote for the bill, citing his Catholic faith.

The Editors: Threats to Deport Dreamers Are Cruel and Shortsighted
The Editors

The Editors: Litmus tests lead to mediocre politics and voter disengagement
The Editors

The bill has prompted a familiar clash in the ongoing culture war that pits religious liberty against anti-discrimination measures. As was seen in fights over transgender access to public bathrooms in North Carolina, Indiana’s Religious Freedom Restoration Act and wedding cakes in Colorado, critics and supporters of S.B. 17 alike fear that their most fundamental rights are under attack.

Critics are wrong in saying that the bill gives professionals an affirmative right to discriminate. At most, the introduction of a new legal defense could make them more confident about denying services when they feel their religious freedom is at stake. Texas, like most states and the federal government, has no antidiscrimination laws for L.G.B.T. people.

However, while S.B. 17 makes no mention of sexual orientation or gender identity, it is only one of a raft of faith-based exemption bills under consideration in Texas that raise concerns about discrimination. Other measures would allow medical and mental-health professionals to refuse nonemergency care for religious reasons, would let individuals and businesses refuse to provide goods and services for same-sex weddings and would prohibit local regulations that require transgender-friendly bathrooms. It is not surprising, then, that the L.G.B.T. community in Texas feels besieged and sees religious liberty as a thinly veiled excuse for discrimination.

This is a problem for supporters of religious freedom protections. While the intent of S.B. 17—to create a professional environment that is hospitable to people who disapprove of same-sex marriage—is itself worthy, such laws are tactically questionable. Conscience protection laws that allow health care professionals to refuse to perform abortions, sterilizations or euthanasia are too important to be dragged into the culture war. Balancing sincere religious beliefs about marriage and gender identity with concerns about discrimination is a real challenge. In the face of rapid social change, these fundamental questions should be grappled with in our communities and churches, not prematurely adjudicated in courts, legislatures or corporate headquarters. As we noted following the Supreme Court’s decision in the Masterpiece Cakeshop case, “what the country needs is not a definitive legal ruling, but common understanding of the real fears felt by people on all sides of these cases.”

Religious Americans inhabit an increasingly secular culture. But we must not let legitimate concerns about our ability to live out our faith in public life blind us to the fears of our fellow citizens who feel their civil rights are up for debate. The heated national conversation about this tension can obscure the fact that, ultimately, these are questions that will be faced by neighbors: Will I refuse to cater my neighbor’s wedding? Will I sue my neighbor for refusing or find another vendor? People acting in good faith will arrive at different answers. But for Christians, love, not fear, should guide the path forward.

The Editors
Show Comments (
1
)
Comments are automatically closed two weeks after an article's initial publication. See our comments policy for more.
A Fielder
2 years 8 months ago

"In the face of rapid social change, these fundamental questions should be grappled with in our communities and churches, not prematurely adjudicated in courts, legislatures or corporate headquarters."

The editors should reconsider this statement. First, Seventy percent of Americans don't want Row v Wade overturned. If public opinion is primary, the legislature, the bishops, and the editors of this publication are wasting a lot of time. Secondly, I'm not sure how church communities will resolve anything. Ideally, churches should be communities of moral discernment, but America is very segregated on Sunday morning, both racially and politically. Not to mention, the members of the (catholic) church don't have any decision making authority anyway. The Catholic Bishops function more like a corporation in this regard, except that most corporate boards are actually much more responsive to their shareholders and customers.