The Bathroom Wars: Is all of this really necessary? 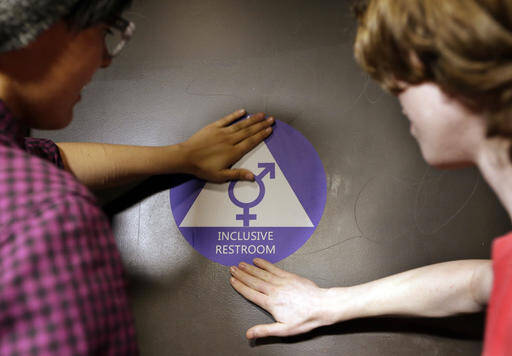 The legislative overreach exemplified by the North Carolina Legislature’s recent decision to require citizens to use the bathrooms, locker rooms and changing rooms that correspond to the gender of their births is surpassed only by the executive overreach of the U.S. Justice Department’s subsequent announcement that every school district in the country should do precisely the opposite. The Obama administration’s directive, The New York Times reported, “does not have the force of law, but it contains an implicit threat: Schools that do not abide by the Obama administration’s interpretation of the law could face lawsuits or a loss of federal aid.”

For the record, federal aid to education in North Carolina is about $4 billion, an amount that if withdrawn would cripple critical programs for the very people that both sides say they are seeking to protect. As Mark Shields, the syndicated columnist and PBS commentator, put it, the administration’s announcement is the equivalent of threatening to drop a financial “federal atom bomb” on North Carolina in order to deal with a situation that involves less than one half of 1 percent of the state’s population. By comparison, about 6 percent of North Carolinians are unemployed and about one in five are living in poverty.

Is all of this really necessary? Don’t get me wrong: I’m of the opinion that, generally speaking, people should be treated in the way they want to be treated and that reasonable accommodations should be made to see that they are. But do we really need the federal government to extort a solution from the more than 300 million of us who, until very recently, were not even aware that this was a problem and are perhaps still struggling to understand why it might be?

“This is the kind of issue that is normally handled with culture norms, and people making compromises,” said Michael Gerson of The Washington Post on “PBS Newshour,” “but now we have both sides politicizing this.” We have reached a point, in other words, where we apparently need to legislate or litigate every social disagreement among us, resolving even relatively minor disputes by heavy-handed legislation or judicial fiat.

This, of course, is part and parcel of the cultural warfare we have come to expect in this golden era of ideological partisanship: “We take issues like this that maybe people of good will could come to some agreement on, “ said Mr. Gerson, “and run them through this culture war machine of our politics, when, in fact, I think, on this type of issue, we have a long history of reasonable people reaching accommodations in their own community.”

Admittedly, there is also a long history of people not reaching accommodations in their own communities on some important issues. But Mr. Gerson is onto something, which we will need to bear in mind if our Madisonian experiment in republican government is going to survive the 21st century: “The cool and deliberate sense of the community,” wrote Publius in Federalist Paper 63, “ought, in all governments, and actually will, in all free governments, ultimately prevail over the views of its rulers.” In other words, appeal to the common sense and decency of our neighbors should be our first resort in times of conflict. In a democracy worthy of the name, law is a sober compromise of last resort, not a blunt instrument wielded with self-righteous alacrity by alternating factions.

I have a feeling that if the good people of North Carolina had been given a little more time and space, they would have found ways to treat all their fellow citizens with the respect that most people think most people deserve. Then again, maybe not. Regrettably, we will never know.

Matt Malone, S.J.
@americaeditor
Show Comments (
3
)
Comments are automatically closed two weeks after an article's initial publication. See our comments policy for more.
J Cabaniss
6 years ago
Apparently the author considers the North Carolina law to be so obviously wrong he didn't feel the actual issue needed to be addressed. It's obviously a question of not treating people with respect so let's just move on. Then again, maybe there's more to it. A more accurate description of the problem is this: should a man have the legal right to use public locker rooms that are today reserved for women? The local high school near me uses a city pool for its swim team. They practice every day at 3:00, the girls changing in one room, the boys in another. If there was a law that permitted a transgendered man to use the women's locker room, what would prevent any man from entering it every day at 3:00? What is required of a person as proof he (or she) is transgendered? If all that is required to gain entry to the facilities of the opposite sex is the assertion that "Today I am a (wo)man" is it reasonable to expect that such behavior will not occur? I wonder what those who believe this is a matter of "treat(ing) their fellow citizens with the respect that most people think most people deserve" would do for male inmates who claim to be transgendered. If they're not willing to ship them over to a women's prison it can only be because at that level reality simply cannot be ignored.
ROBERT LEVINE
5 years 11 months ago
Among the “Many Things” which Matt Malone could not fit into the limited space of his 6/6/16 column is the notion that it is the right, duty, and obligation of the Federal Government to assure that civil rights are equally accorded to all citizens in all states (Amendment 14, #1). While I agree with his delightfully worded thesis that “generally speaking, people should be treated in the way they want to be treated and that reasonable accommodations should be made to see that they are,” the assertions of “executive overreach” by the federal executive branch in response to “legislative overreach” by North Carolina are both overwrought. Each organization is doing, wisely or otherwise, precisely what it is designed to do. The notion of “reasonable people reaching accommodations in their own community” is built upon the assumption of a “perfectly” representative democracy with an actively involved citizenry – a model of American government which is far from actual practice either today or in an idealized past. Rather, our participation is generally limited to changing the roster of our representatives every 2 to 6 years, a system with a built-in lag-time, but which also attempts to balance the dual needs of stability and responsiveness. The “common sense and decency of our neighbors” regarding particular issues has been replaced by the political realities imposed on and accepted by our representatives, and by the multiplicity of issues upon which we must pass judgment regarding their suitability for office. In short, the bathroom mentality of the North Carolina legislature (and Governor) is not particularly amenable to a timely restructuring by “the cool and deliberate sense of the community.” It is in this context that we must rely on the Federal Executive to carry out its constitutionally mandated responsibility, promptly and decisively, as a last resort to the inertia and demagoguery of other branches and other levels of our national government. Afterwards, we may be sure, checks and balances will work their wonders.
Richard Booth
5 years 11 months ago
It is my view that the word "overreach" has become a commonplace hyperbole that some people apply to virtually all actions with which they disagree. It is important to know what the point of appropriate reach is before we begin to criticize organizations and people who have merely taken a position. We have a situation in the transgender "bathroom" issue that appears obvious to those on opposing sides. Just what does it mean to discriminate against those whose condition is somewhat different from the norm and how do we not do that? And, the obverse, under what conditions do we come down on the side of those who fear supporting a new status quo ante. I just returned to IL, where I live, from North Carolina. I was talking with a bus driver there, who himself brought up the topic of the state's position on this issue. He simply said, "I don't want my daughters in a bathroom with men." To him, the situation is straightforward and personal, and his state upheld what he believes are his rights. Neither side, I think, is looking at this situation more than superficially. It is time for both sides to stop utilizing cliches and simplistic explanations to deal with deep issues of validation, majority-minority status, prioritization of national and human values, potential outcomes of both responses patterns and, most of all, fear and ersatz progressivism.