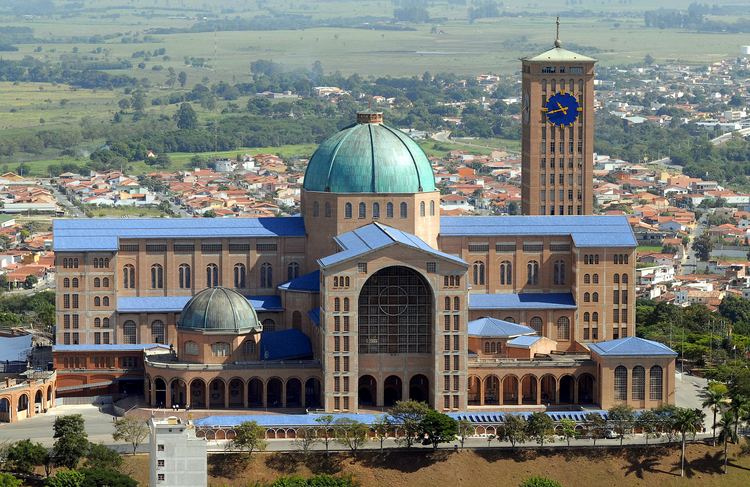 Basilica of the National Shrine of Our Lady of Aparecida in Aparecida, São Paulo, Brazil (Wikimedia Commons)

The pope recognized the miracle needed for the canonization of the Brazilian nun, who was a member of the Missionary Sisters of the Immaculate Conception.

Born in 1914, she was known to Brazilian Catholics as Sister Dulce, the mother of the poor. She founded the first Catholic workers' organization in the state of Bahia, started a health clinic for poor workers and opened a school for working families. She created a hospital, an orphanage and care centers for the elderly and disabled.

She was nominated for the Nobel Peace Prize by then-President Jose Sarney in 1988. St. John Paul II, who called her work "an example for humanity,'' met her in 1980 during his first trip to Brazil and, returning in 1991, he visited her in the hospital. She died in 1992 at the age of 77 with tens of thousands attending her funeral and even more gathering for her beatification in 2011.

Pope Francis also authorized the publication of a decree recognizing a miracle attributed to the intercession of Blessed Josephine Vannini, who was born in Rome in 1859 and died in 1911. She co-founded the Daughters of St. Camillus, who serve the sick and elderly.

Another decree the pope signed recognizes the miracle needed for the beatification of Sister Maria Ripamonti, also known as Sister Lucia of the Immaculate. Born in Italy in 1909, she was a member of the Handmaids of Charity. She died in 1954.

The pope also recognized the heroic virtues of:

-- Auxiliary Bishop Giovanni Battista Pinardi of Turin. Born in 1880, he promoted the Catholic press, workers' rights and social projects during a time of considerable fascist opposition. He believed Catholic media was important to counteract the hatred and worldly values being spread at the time. He died in 1962.

-- Father Carlo Salerio, born in Milan in 1827. He aided those wounded during the city's war against Austrian control and he fought in Italy's first war of independence against the Austrian Empire in 1848. He became a missionary of what is now the Pontifical Institute for Foreign Missions, serving in Papua New Guinea. When he returned to Milan, he founded the Sisters of Reparation. He died in 1870.

-- Marianist Father Domingo Lazaro Castro, who was the order's first Spanish provincial. He was born in Spain in 1877 and died in 1935.

-- Capuchin Father Salvatore da Casca, who was born Erminio Pinzetta in Brazil in 1911 and died in 1972.

-- Mother Maria Eufrasia Iaconis, who was born in Italy in 1867. She founded the Congregation of the Daughters of the Immaculate Conception in Buenos Aires, where she and the other sisters served Italian immigrants in the capital. After her death in 1916, her life and work were promoted by her Jesuit confessor. The diocesan phase of her sainthood cause was concluded by the future Pope Francis, then-Cardinal Jorge Bergoglio of Buenos Aires, in 2012.