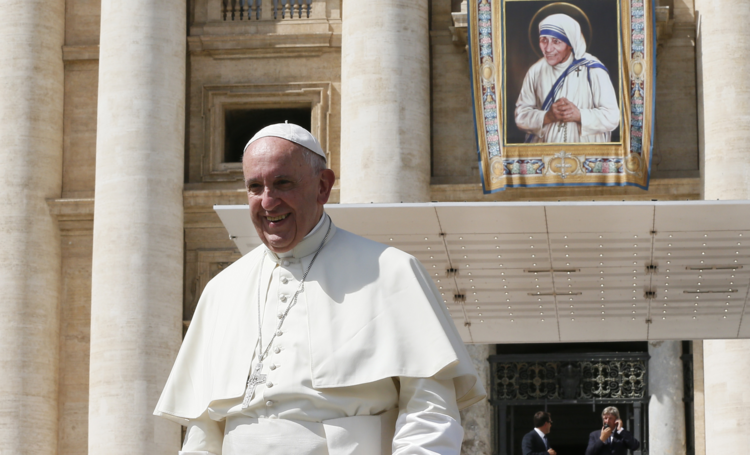 A tapestry of new St. Teresa of Kolkata is seen as Pope Francis leaves his general audience in St. Peter's Square at the Vatican Sept. 7. (CNS photo/Paul Haring)

Pope Francis recognized a fourth path to sainthood in the Catholic Church in an apostolic letter released today. He has opened the way to declare as saints those who, following in the footsteps and teachings of Jesus, freely choose to give their lives for others in situations that they know will lead to their certain death.

The pope decreed this fourth path in an apostolic letter dated July 11 in the form of a motu proprio (or, decree on his own initiative) titled “Greater Love Than This, On the Offering of life.” (The Latin title is “Lettera Apostolicae Motu Proprio Datae De Oblatione Vitae.”)

"Those Christians are worthy of special consideration and honor who...have offered their life voluntarily and freely for others and have persevered in this to death.”

Before now, the Catholic Church has recognized only three paths by which a person can be declared a saint: martyrdom, living the virtues of Christian life to a heroic degree and “exceptional cases” known as “equipollent” or “equivalent canonization,” based on the confirmation of an ancient tradition of veneration of the saintliness of a person. Pope Francis has used all three paths in, respectively, the causes of Archbishop Óscar Romero, Mother Teresa of Calcutta and Peter Faber, S.J.

In his introduction to the fourth way in today’s motu proprio (published in Latin and Italian), the pope opens with the words of Jesus according to St. John: “No one has greater love than this, to lay down one’s life for one’s friends” (Jn 15:13).

Francis goes on to say that “those Christians are worthy of special consideration and honor who, following in the footsteps and teaching of Jesus, have offered their life voluntarily and freely for others and have persevered in this to death.”

Updates from Fatima: reports a historic trip and canonization
The Editors

The pope writes, “It is certain that this heroic offering of life, suggested and sustained by charity, expresses a true, full and exemplary imitation of Christ and, therefore, is worthy of that admiration which the community of the faithful have usually reserved for those who have voluntarily accepted the martyrdom of blood or have exercised the Christian virtues to a heroic degree.”

Francis stated that the Vatican’s Congregation for the Causes of Saints had given a favorable opinion on this criterion at its plenary session on Sept. 27, 2016, and laid down a series of norms, spelled out in 36 articles, that are to be followed in the process for beatification and canonization of such persons.

In Article 1, he states that “the offering of life is a new case of the path of beatification and canonization, distinct from the cases of martyrdom and the heroic [living] of the virtues.”

Article 2 introduces the procedure for beginning the process of beatification and canonization of such persons, stating that “the offering of one’s life may be valid and effective for the beatification of a Servant of God, it must correspond to the following criteria.”

Second, there must be “the practice of the Christian virtues, at least to an ordinary degree, before the offering of [one’s] life, and then until death.”

Third, there must be “the existence of the fame of sanctity and of signs [of holiness], at least after death.”

Fourth, there is “the need for a miracle for beatification, that happens after the death of the Servant of God and through his/her intercession.”

The three existing paths to sainthood “did not do justice” to “true, and in many aspects, touching expressions of sanctity.”

Francis also decreed that the process for the beatification and the canonization of such persons is to be conducted according to the norms laid down by St. John Paul II in 1983, amended to provide for this fourth path to sainthood.

The rationale behind today’s decree is explained by an article in L’Osservatore Romano, which also summarizes the discussion that began in 2014 in the Congregation for the Causes of Saints, “with the pope’s encouragement,” and preceded the promulgation of today’s decree.

The article emphasizes that the congregation recognized that the three existing paths to sainthood “did not do justice” to “true, and in many aspects, touching expressions of sanctity.” It recalled that Pope Benedict XVI already recognized this fact and “did not exclude from the honors of the altar those who had given their lives in an extreme act of charity such as, for example, by giving assistance to those infected, in the spread of a contagious disease, which becomes the cause of certain death.” 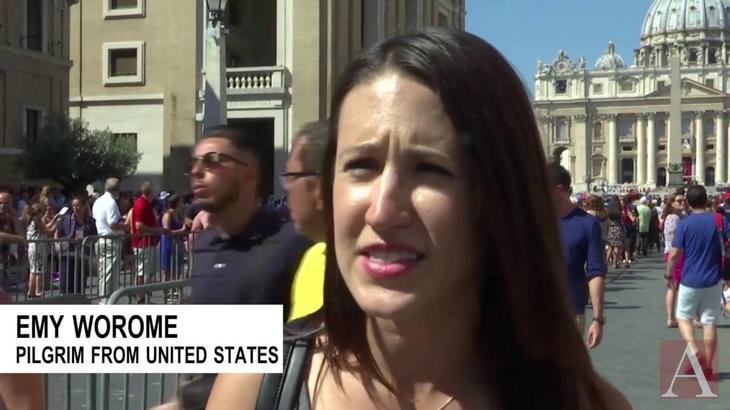 My human understanding of these "whose a saint" issues is limited. As far as I'm concerned, every parochial school teacher is a saint. They work under minimum wage, do more than expected, love all children, have no job security, lousy or no retirement benefits, poor health care and serve at the whim of the pastor. You never hear about them. These are my saints.

How much does it cost these days to be canonized a saint? I've lost track.

Another path, really? I'll trust the only path Paul recognized when he addressed those that were "in Christ" in his letters to the Ephesians, Phillipians, and Colossians. Once you believe/trust in Christ, you are deemed a saint. It is not a title that is merited by any accomplishment but rather granted to those that have received the gift of faith.

Speaking of the papacy, what are we to make of the article at https://www.lifesitenews.com/news/top-vatican-official-gay-sex-in-vatican-never-been-worse-than-under-francis. ?