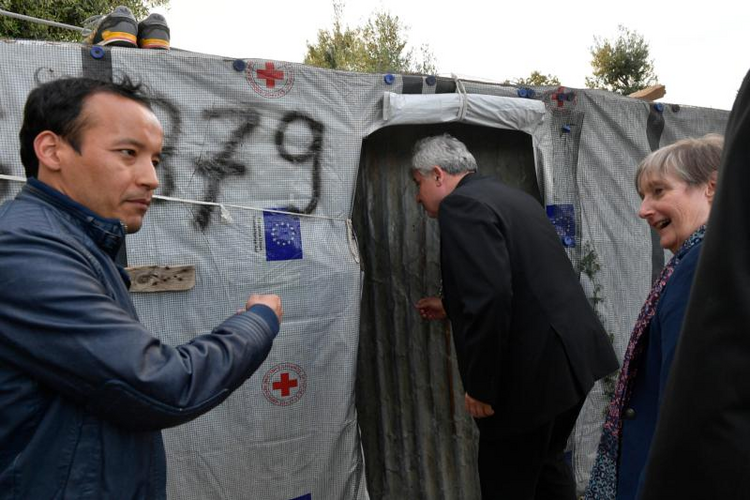 MYTILENE, Greece (CNS) -- When a Greek priest suggested that if Greece found a home for all the migrants and refugees in its camps, Turkey would just let more come over, Cardinal Konrad Krajewski balked.

"That's like a hospital saying it shouldn't release healthy patients because empty rooms could cause more accidents. That's politics ... we are here to help," said the cardinal, who, as papal almoner, distributes charity on behalf of Pope Francis.

Three years after Pope Francis visited Lesbos and took 12 refugees back to Rome with him, Cardinal Krajewski returned to the Greek island May 8 to check on the situation for the pope, to make contact with government officials and to distribute more than $100,000 to Caritas Hellas and to projects the Greek Catholic charity is supporting.

The cardinal was accompanied by Archbishop Sevastianos Rossolatos of Athens and Archbishop Jean-Claude Hollerich of Luxembourg, president of Commission of the Bishops' Conferences of the European Union.

As soon as the delegation got off the plane, they prayed that God would bless their mission and help them find a way to help the migrants and refugees. Then they met with Andreas Gougoulis, the Greek government's secretary-general for reception, and with officials in charge of some of the camps and of the asylum-screening process.

Gougoulis said Greece currently hosts 70,000 asylum-seekers in 32 camps across the country. While the situation is calm compared to the 1.2 million arrivals Greece saw in 2015, the world's attention has turned elsewhere, and the European Union program to relocate the asylum-seekers from Greece has ended.

The Greek government gets EU money to help run the camps, but that does not address the problem of finding a way to help qualified refugees begin a new life, he said.

"Solidarity isn't just a word, it's an action," and right now there isn't any, Gougoulis said.

With that short introduction to facts, figures and politics, the Vatican delegation got in a bus and rode up to the "informal" Moria camp -- a ragged collection of tents amid a hillside olive grove next to the government-established Moria camp.

While 4,800 people live in the official camp, more than 1,000 live outside it. The older tents, near the main road, were donated by humanitarian organizations. But as one moves farther up the hill, the dwellings become more rudimentary constructions of splintered old boards covered with a patchwork of tarps bearing the logos of the Red Cross, a variety of U.N. agencies and small aid organizations.

Zeynap, a 13-year-old girl from Afghanistan, tried to write a letter to "Mr. Pope" Francis in English, but then decided to make a video appeal instead. "Here no good," she said. "All people sick, sad. Here no good for baby, for woman, for man."

The young woman said she wasn't sure what "pope" meant, but she knew he was an important person and could help. So she closed her video plea with a "thank you" and blew a kiss.

Aw, what a cute, heart-tugging story.....why doesn't the Cardinal get out in front of the problem and take his money to go visit places like Libya where the migrants come from and get the word out that Europe is saturated and they need to find a way to solve their problems at home.