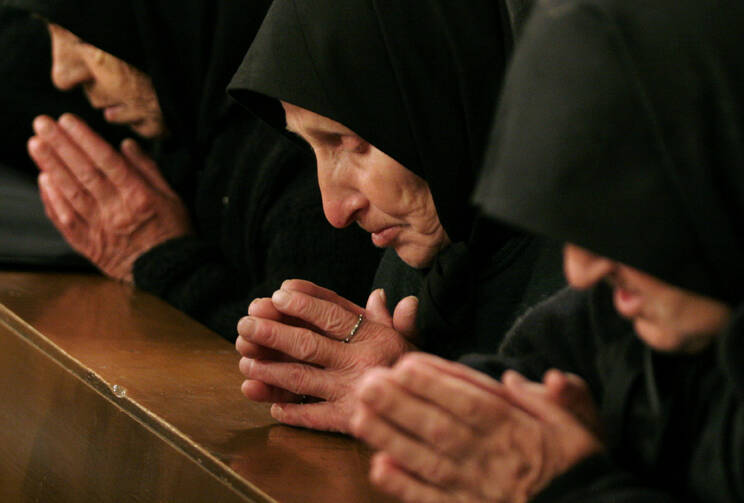 Pope Francis will visit Bulgaria and North Macedonia from May 5 to 7, two majority Orthodox countries with very small Catholic populations that are facing high unemployment, poverty and tensions over immigration.

He goes as a messenger of peace to support these emerging countries on a visit that has a strong ecumenical dimension.

From May 31 to June 2, Francis will also visit Romania, another majority Orthodox land, bringing the total number of Christian Orthodox nations he will have visited to six. His trips are meant to encourage the small Catholic minorities in all three countries and to foster good relations with the Orthodox churches as a step on the road to Christian unity.

Bulgaria is a Slavic-speaking nation of 7.4 million people in the eastern Balkans. Situated on the shore of the Black Sea on one side, it shares borders with North Macedonia, Romania, Serbia, Greece and Turkey. Since 2007, it has been one of the 28 member states of the European Union.

Pope Francis will visit Bulgaria and North Macedonia from May 5 to 7, two majority Orthodox countries with very small Catholic populations.

North Macedonia, which gained independence in 1991 after the breakup of the former Yugoslavia, is a landlocked country with a population of over two million people. Situated in southeastern Europe, it shares borders with Bulgaria, Greece, Albania, Serbia and Kosovo. It has applied to become a member of the European Union, and the government sees the pope’s visit as supportive of that goal.

Both countries have high unemployment and poverty rates, as well as high rates of immigration, mainly from Syria and Iraq. The presence of migrants, even those who hope to move to other countries in Europe, creates additional problems for the two governments.

“Pope Francis is coming in a sign of friendship to show that the Catholic Church is their friend and wants to have normal relations with them and has no intention of interfering in their internal affairs,” Bishop Brian Farrell, the secretary of the Pontifical Council for Promoting Christian Unity, told America on the eve of the visit to Bulgaria and North Macedonia. “His visit will show that the Catholic Church is not their rival; it is their friend.”

“His visit will show that the Catholic Church is not their rival; it is their friend.”

Bishop Farrell recalled that when St. John Paul II was pope, he often spoke in private conversations about the Catholic Church’s approach to the Orthodox churches in Eastern Europe and always insisted, “What we seek is communion, not jurisdiction.” He noted that according to the International Commission for Theological Dialogue Between the Catholic Church and the Orthodox Church, “there is agreement that in the first millennium [of Christianity] there was little papal jurisdiction over the East; it was a question of communion.”

The governments of both countries have invited the pope; so, too, have the Catholic bishops, while Orthodox leaders have given his visit their blessing. Francis accepted the invitation, in part, in recognition of the fact that for the past 33 years government-led delegations from both countries that include religious leaders have traveled to Rome for the feast of Sts. Cyril and Methodius on May 24. The saints are buried in the Basilica of San Clemente, near the Coliseum in Rome.

Pope John Paul II visited Bulgaria in 2002, but neither he nor Benedict XVI accepted the invitation extended by the government of North Macedonia to visit that country.

Pope Francis will take a two-hour flight from Rome to Bulgaria this Sunday morning, May 5. The logo for this visit features the phrase “Pacem in Terris” (“Peace on Earth”), the title of Pope John XXIII’s famous encyclical. Francis sees his visit as following in the footsteps of that saintly pope who, as Archbishop Angelo Roncalli, was the papal envoy and then from 1931 to 34 the apostolic delegate in Bulgaria and is still admired by the people for his good work here.

The governments of both countries have invited the pope; so, too, have the Catholic bishops, while Orthodox leaders have given his visit their blessing.

Francis will drive from the airport to Sofia, the capital city with 1.3 million inhabitants, whose origins date back almost two millennia. Once there, he will make a courtesy visit to the president and address the country’s civil and political authorities in a nationally televised speech.

From there he will travel to the Palace of the Holy Synod for the most important ecumenical moment of his visit. There, at noon local time, he will meet Patriarch Neofit and the Orthodox bishops and have a private conversation with the patriarch. Afterward, he will visit the Orthodox St. Alexander Nevsky Cathedral, which dates back to the 1880s, and pray in silence before the throne of Sts. Cyril and Methodius.

The Bulgarian Orthodox church does not engage in any ecumenical dialogue. It is not part of the international Catholic-Orthodox theological dialogue nor is it a member of the World Council of Churches. Furthermore, it did not participate in the pan-Orthodox Holy and Great Council in Crete in June 2016. It should be noted, however, that the patriarch, who studied in Rome, is open to ecumenical contacts, but most of the bishops of the synod are not.

Nevertheless, the Holy Synod will welcome Pope Francis next Sunday, in a significant gesture of friendliness, just as it did John Paul II in 2002. On the eve of the visit, the synod issued a statement confirming that Patriarch Neofit and Pope Francis would meet in private. But it also declared its “unanimous decision” that there would be no possibility of a common celebration or prayer together with Francis since “this is strictly prohibited by the sacred canons of the church.”

There are some 68,000 Catholics in Bulgaria, and the pope will celebrate Mass for many of them in the capital city’s Knyaz Alexander square that Sunday afternoon.

The logo for his visit to North Macedonia features the words from the Gospel of St. Luke 12:32, “Do not fear, little flock.”

On Monday morning, he will visit a refugee camp run by Caritas Bulgaria, before traveling 128 miles to the small city of Rakovsky, where he will celebrate Mass for some 50,000 faithful and give first Communion to children. That afternoon he will meet the Catholic community in the Church of St. Michael the Archangel. On his return to Sofia, he will participate in an “encounter for peace,” attended by representatives of all the religious confessions in the country.

On Tuesday morning, May 7, Francis will take a 20-minute plane ride from Sofia to Skopje, the capital city of North Macedonia. People have lived in this area since the 4,000 B.C.E., and Mother Teresa of Calcutta was born to Albanian parents here. The logo for his visit here features the words from the Gospel of St. Luke 12:32, “Do not fear, little flock.”

After meeting the country’s president and addressing the civic authorities in morning, the pope will visit a memorial to Mother Teresa in the presence of the country’s religious leaders and meet with people living in poverty.

A message to Pope Francis: Be wary of right-wing populists when you visit Romania
Marc Roscoe Loustau

Two groundbreaking dialogues at the Vatican this week
Inside the Vatican

Here, too, the religious situation is delicate, and Francis knows he is walking on thin ice because the local Orthodox church is not recognized by any of the other Orthodox churches, though it is seeking recognition from the Bulgarian church, having broken off from the Serbian church. Francis is not expected to have a private conversation with the Orthodox primate, Archbishop Stefan, as this would deeply upset the other Orthodox churches and especially the Serbian Orthodox church, which sees the Macedonian as a breakaway church. The Serbian synod did not invite John Paul II or Benedict to the country, and it has not so far extended an invitation to Francis, and such a possibility would almost certainly be excluded if he were to meet in private with Archbishop Stefan.

After visiting the memorial dedicated to the saint of the slums, Francis will celebrate Mass for the country’s 15,000 Catholics in the city’s Macedonia Square. That afternoon, he will participate in an ecumenical and interreligious meeting with young people and afterward will meet the priests, religious and families in the cathedral, before taking the plane for the 460-mile flight back to Rome. Given the short flying time, it is not clear if he will give an airborne press conference this time, and if he does, it is bound to be brief.

This will be Francis’s 29th journey outside Italy since his election as pope in March 2013. Bulgaria and North Macedonia will be the 41st and 42nd country, respectively, that he has visited. His next visit is to Romania on May 31.