What Christ in the Eucharist teaches us about time and eternity 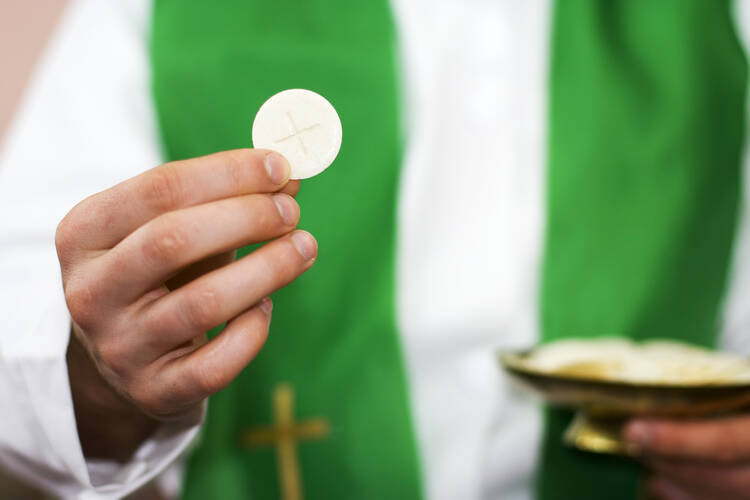 We never experience time itself as having a beginning or an end. We have no memory of being thrown into the river of time, the one which picks up speed and white caps with each passing year. We find it hard to imagine that this river will only carry us until it meets an endless ocean. We know that each of us will die, yet we cannot truly accept this. We affirm and forget.

Our experience of time is that of never having enough of it. The present constantly slips away. The hoped-for future never arrives. Every fount of wisdom tells us to live in the present, but what is our today save the bundle of worries and regrets that we have portaged from the past?

We grow desperate when we run out of time, making decisions and taking actions that previously we could not imagine. Without much thought, we realize that, if all is lost, we have nothing to lose in “last moment” acts of desperation.

Something such as this must have happened to Peter when he denied that he even knew the arrested Jesus of Nazareth. In the flash given to him to frame his thoughts, the disciple must have reasoned: “Everything I’ve understood about this man and about my life has come undone. My heart truly dies with him, but what good would my arrest and death do for him?”

Our experience of time is that of never having enough of it. The present constantly slips away. The hoped-for future never arrives.

Then, as though our world, which many would claim to be meaningless, felt compelled to be malevolent, Peter is forced to deny his Lord two more times. With even a touch of compassion, one cannot help but wonder, come Sunday morning, what could be left of this man? How could he not lament his fate and loathe his very self?

Time cannot be undone. It was created by God to shoot purposefully toward its end. We ride it as forgetful flotsam, not able to imagine its completion, unable to forget the failures of our past.

But the risen Christ comes to Peter. He does not undo the past. The betrayal happened. It cannot be canceled. Instead, Christ gathers the past into his arms, the arms he stretched wide upon the cross. He calls Peter to himself and asks three times if he loves his Lord, and then the disciple is told, “Feed my sheep.”

St. John the Evangelist masterfully weaves together themes that, at first glance, seem so disparate. Here he teaches us of an integral unity that exists between eternity, resurrection and Eucharist.

Christ gathers the past into his arms, the arms he stretched wide upon the cross.

What do we know about eternity? Many would answer, nothing really. Yet the evangelists would respond: quite a bit, if one knows of Christ’s resurrection. And given how deeply Christians disagree among themselves, what should we say about the Eucharist, the gift of his very self, which Christ left to us in time? Again, the Gospels tell us to look to the resurrection.

The Eucharist stretches two millennia into the past. It extends, perhaps even farther and surely more completely, into the parousia, the moment that we call the end of time, the hour when Christ in his fullness will be revealed.

The Gospel according to Winnie the Pooh
Terrance Klein

Christ calls all of us to discipleship. Are we listening?
Michael Simone

In the resurrection accounts, we are being taught that Christ, who lives forever in his own fullness, is present in every celebration of the Eucharist. Christ gathers all of time into himself. Time began when creation was called into existence. Time will end when God calls creation to judgment. God does not exist in time. Time is the creation of God.

In the Eucharist, the risen Christ breaks into time, into our midst, and there he gathers the fragments of our failures and our frustrations into his arms, transforming them into his person, his mission, his sacrificial passing over to the Father. In the Eucharist, victims of injustice are not forgotten. At his altar, the dead are not departed. All is gathered up into the arms of time’s Lord. In the Eucharist, we are asked to profess our love and to feed each other with the very body and blood of Christ.

The risen Christ, still bearing his wounds, calls us to Eucharist. The meal he gave us the night before he died becomes food for the journey. It is the foretaste of resurrected fellowship. Christ doesn’t undo time, not even the crucifixion. Instead he shows himself to be the author of time. It is his. We are his. He calls us to him. He claims us, claims each moment of our lives, as his. He asks if we trust him, if we love him. And then he tells us, “Feed my sheep.”

Fr. Klein - what a beautiful commentary on what should be the foundation of our faith - the Eucharist. I am afraid, however, that most Catholics really don't know much about the Eucharist and why / how Jesus instituted it. I know that didn't until just recently (and I am 56 years old). I found that I really did not understand my Catholic faith until I learned about the ancient Jewish faith and the Middle East (Israel) during the time of Christ.

I wish our Church did a better job educating our people, but I guess 2,000 years ago what I just recently learned was a "given" to all of the early converts.

In any event, what a wonderful job you did with your article. Thank you.

Fr. Klein, I love your spirituality and your creative vision and images. Thank you for this beautiful reflection.