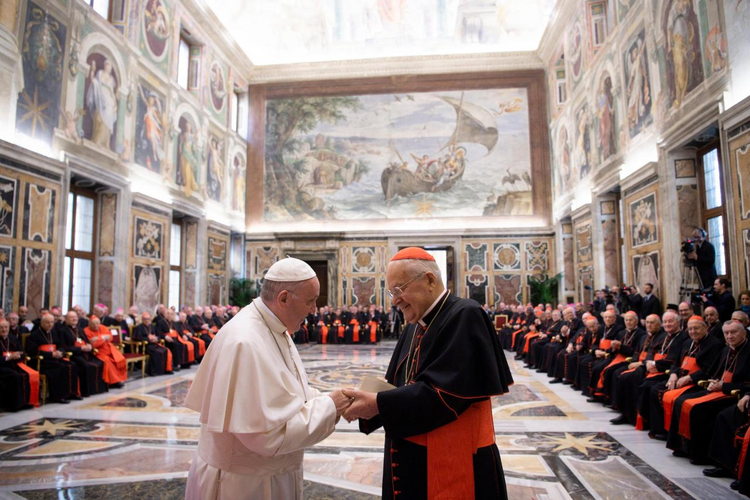 ROME (CNS) -- The proposed apostolic constitution for reforming and governing the Roman Curia is expected to emphasize the church's missionary mandate with the creation of a "super-dicastery" merging two offices dedicated to evangelization.

"The main point of the new apostolic constitution is that the church's mission is evangelization. It puts it at the center of the church and of everything the Curia does," Cardinal Oswald Gracias of Mumbai, India, told Vida Nueva, a Spanish weekly publication dedicated to news about the Catholic Church.

Cardinals Gracias and Oscar Rodriguez Maradiaga of Tegucigalpa, Honduras, both members of Pope Francis' Council of Cardinals, spoke to the Spanish weekly about the final draft of reforms the council approved at its previous meeting in early April. Vida Nueva provided Catholic News Service with an advance copy of the Spanish-language article, which was to be published April 27.

The provisional title of the new constitution, "Praedicate Evangelium" ("Preach the Gospel"), "shows that evangelization is the number one goal, ahead of anything else," Cardinal Gracias told Vida Nueva.

"Pope Francis always emphasizes that the church is missionary," Cardinal Rodriguez Maradiaga said, which is why the new dicastery will supersede the Congregation for the Doctrine of the Faith in importance.

Pope Francis: Reform of the Roman Curia is harmed by the conspiracies of minority
Gerard O’Connell

The new Dicastery of Evangelization will be a consolidation of the current Congregation for the Evangelization of Peoples, which coordinates the church's missionary activities, and the Pontifical Council for Promoting New Evangelization, which aims to promote a renewal of the faith in countries where Christian vitality has been waning.

Other major changes expected, the cardinals said, include: merging the Pontifical Council for Culture with the Congregation for Catholic Education; transforming the current Papal Almoner's office, which is charged with coordinating Pope Francis' acts of charity, into a Dicastery for Charity; and granting greater authority to the Pontifical Commission for the Protection of Minors.

Cardinal Gracias said it was important the papal commission remain independent from the Roman Curia in order to maintain its credibility; however, "if you are not part of the Curia, you have no power over it."

He said, "It's necessary to strike a balance between credibility and effectiveness" for the commission, whose mandate has been advising the pope and helping local churches understand and utilize best practices when it comes to safeguarding minors from abuse.

A major focus of the constitution is to create a change in mentality and in the relationship between the Holy See and the local churches, represented by the world's bishops, Cardinal Rodriguez Maradiaga said.

The constitution places the Vatican dicasteries at the service of both the pope and the bishops, who are "successors of the apostles" and "are not in an ecclesiological position below those who work in the Roman Curia," the Honduran cardinal said.

Cardinal Gracias said, "The pope wanted a mindset of service to prevail and that the Curia also be directly available to the bishops" in order to help them.

Cardinal Rodriguez Maradiaga said the new offices and upcoming reforms not only streamline the Curia, but also "emphasize the importance of the laity in the church and for the church" by allowing the possibility for a layperson to head a dicastery. Traditionally, congregations have a cardinal as prefect and pontifical councils have had either a cardinal or an archbishop as president.

The constitution's prologue will emphasize the missionary role of all baptized men and women, not just those who have been ordained or consecrated, the Honduran cardinal added.

The draft has been sent to the dicasteries of the Roman Curia, the leaders of world's bishops' conferences, the synods of the Eastern Catholic churches, the conferences of major superiors of men and women religious and some pontifical universities for their observations and suggested improvements.

The two cardinals said they do not expect major changes to come out of the consultative phase since the five-year process of drafting the constitution involved gathering the ideas and concerns of the local churches and the various Vatican offices.

It is hoped each "overall assessment" will be handed in before the end of May -- in time for the six-member Council of Cardinals to study the suggestions and have an amended draft to give to the pope to sign June 29, the feast of Sts. Peter and Paul. If the suggestions do not come in time, the constitution's publication would most likely be delayed until after the summer, the cardinals said.

The new constitution was not going to be a mere "cosmetic change but will promote the change in mentality that has already started," Cardinal Gracias said.

"The Roman Curia will never be the same anymore," Cardinal Rodriguez Maradiaga added.

The Council of Cardinals has been advising the pope on the reform of the Curia and church governance in general since Pope Francis created the body soon after his election in 2013.

at long last? but why choose this picture for this article? Sodano's record as Secretary of State of the Vatican was a DISASTER, and this pontificate has been having to solve the problems created by this utterly unscrupulous church official...

The outcome and fruits of the new Curia's super-reform can already be sensed. The names of papal council's "great 9", which developed into the "great 6" and the results of the present Vatican policy towards Islam, China, ethics without morals and sodoclericalism are visible all over the Church. Poles have a 1000 years old proverb : "You'll sleep in the bed you'd made for yourselves". A our pastors are making our new "bed" since Vat.II....Cdls McCarrick's and Marx's church is a portand of that "new Church". They shouldn't try to fool God out.