“Do not bury hope,” says Pope Francis at Easter Vigil

“Do not bury hope,” says Pope Francis at Easter Vigil 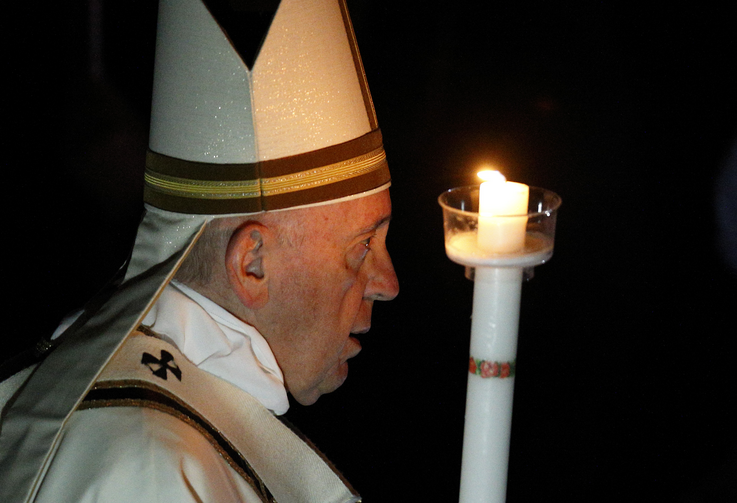 Pope Francis carries a candle in procession as he arrives to celebrate the Easter Vigil in St. Peter's Basilica at the Vatican April 20, 2019. (CNS photo/Paul Haring)

As he celebrated the Easter Vigil in St. Peter’s Basilica for the seventh time since his election as successor to St. Peter, Pope Francis called on Christians worldwide not to give into “a kind of tomb psychology” where all hopes and dreams are buried, but to remember that “Easter is the feast of tombstones taken away, rocks rolled aside.” He also baptized, confirmed and gave first communion to eight catechumens, five men and three women, from Albania, Ecuador, Indonesia, Italy and Peru during the liturgy.

In his homily, Francis reminded the 8,000 Romans and pilgrims from all continents gathered in the basilica built over the tomb of St. Peter that “God takes away even the hardest stones against which our hopes and expectations crash: death, sin, fear, worldliness. Human history does not end before a tombstone because today it encounters the ‘living stone’ (cf. 1 Pet 2:4), the risen Jesus.”

“Do not bury hope!” he told the congregation, calling on them “to rediscover in the Risen Christ the one who rolls back from our heart the heaviest of stones.”

After processing into the darkened basilica with the paschal candle representing the light of Christ, Pope Francis presided at a liturgy that included cardinals, bishops, clergy, religious and lay faithful as well as the ambassadors in the basilica from some 180 countries that have diplomatic relations with the Holy See.

Easter is the feast of tombstones taken away; rocks rolled aside.

Pope Francis drew on the Gospel story of women disciples going to the tomb early Sunday morning. He remarked that the women’s journey “is also our own journey” through history where “at times, it seems that everything comes up against a stone: the beauty of creation against the tragedy of sin; liberation from slavery against infidelity to the covenant; the promises of the prophets against the listless indifference of the people.” So too, he said, “in the history of the church and in our own personal history. It seems that the steps we take never take us to the goal. We can be tempted to think that dashed hope is the bleak law of life.”

But at this Easter vigil, he said, “we see that our journey is not in vain; it does not come up against a tombstone. A single phrase astounds the women and changes history: ‘Why do you seek the living among the dead?’ (Lk 24:5). Why do you think that everything is hopeless, that no one can take away your own tombstones? Why do you give into resignation and failure? Easter is the feast of tombstones taken away; rocks rolled aside.”

Francis went on to identify the stones, the tombstones, that so often block our way in life. First, there is “the stone of discouragement” that blocks hope. We encounter that stone, he said, “once we start thinking that everything is going badly and that things can’t get worse, we lose heart and come to believe that death is stronger than life. We become cynical, negative and despondent. Stone upon stone, we build within ourselves a monument to our own dissatisfaction: the sepulcher of hope. Life becomes a succession of complaints and we grow sick in spirit. A kind of tomb psychology takes over: everything ends there, with no hope of emerging alive.”

He reminded them that when we come face to face with that stone, then the words of Easter come to our rescue: “Why do you seek the living among the dead? The Lord is not to be found in resignation. He is risen; he is not there. Don’t seek him where you will never find him: he is not the God of the dead but of the living (cf. Mk 22:32). Do not bury hope!”

He said there is another stone too that shuts our hearts to hope: “the stone of sin.” He explained that “sin seduces; it promises things easy and quick, prosperity and success, but then leaves behind only solitude and death. Sin is looking for life among the dead, for the meaning of life in things that pass away.” He told his global audience: “Why do you seek the living among the dead? Why not make up your mind to abandon that sin which, like a stone before the entrance to your heart, keeps God’s light from entering in? Why not prefer Jesus, the true light, to the glitter of wealth, career, pride and pleasure? Why not tell the empty things of this world that you no longer live for them, but for the Lord of life?”

Francis said the Gospel tells us that when the women reached the tomb of Jesus they were amazed to see that the stone was taken away and on seeing the angels they were “frightened, and bowed their faces to the ground” and “did not have the courage to look up.”

He quoted Emily Dickinson, the American poet, many of whose poems dealt with death and immortality, who once wrote: “We never know how high we are/Till we are called to rise.”

He said, we believers often do the same thing: “We prefer to remain huddled within our shortcomings, cowering in our fears.” Seeking to explain this odd behavior, he said, we do this “not infrequently because, glum and closed up within ourselves, we feel in control, for it is easier to remain alone in the darkness of our heart than to open ourselves to the Lord. Yet only he can raise us up.”

At this point, he quoted Emily Dickinson, the American poet, many of whose poems dealt with death and immortality, who once wrote: “We never know how high we are/Till we are called to rise.”

Francis reminded believers: “The Lord calls us to get up, to rise at his word, to look up and to realize that we were made for heaven, not for earth, for the heights of life and not for the depths of death: Why do you seek the living among the dead?

“God asks us to view life as he views it, for in each of us he never ceases to see an irrepressible kernel of beauty,” he said. “In sin, he sees sons and daughters to be restored; in death, brothers and sisters to be reborn; in desolation, hearts to be revived.”

He told them, “Do not fear, then; the Lord loves your life, even when you are afraid to look at it and take it in hand” and “in Easter he shows you how much he loves that life: even to the point of living it completely, experiencing anguish, abandonment, death and hell, in order to emerge triumphant to tell you: ‘You are not alone; put your trust in me!’”

Do Not Miss This: Moments of grace at the Easter Vigil
Brian Doyle

Pope Francis concluded by reminding his audience in St Peter’s and worldwide that “Jesus is a specialist at turning our deaths into life, our mourning into dancing (cf. Ps 30:11), and said, “Let us not keep our faces bowed to the ground in fear but raise our eyes to the risen Jesus. His gaze fills us with hope, for it tells us that we are loved unfailingly, and that however much we make a mess of things, his love remains unchanged. This is the one, non-negotiable certitude we have in life: his love does not change.”

Tomorrow morning, Easter Sunday, he will celebrate Mass in St. Peter’s Square and, at midday, will deliver his Easter Message “Urbi et Orbi”—to the city of Rome (“urbi”) and to the world (“orbi”).

Hope is like a seed. Burying hope is a futile exercise. Hope sprouts and rises all over again. Long live hope.