Do Not Miss This: Moments of grace at the Easter Vigil 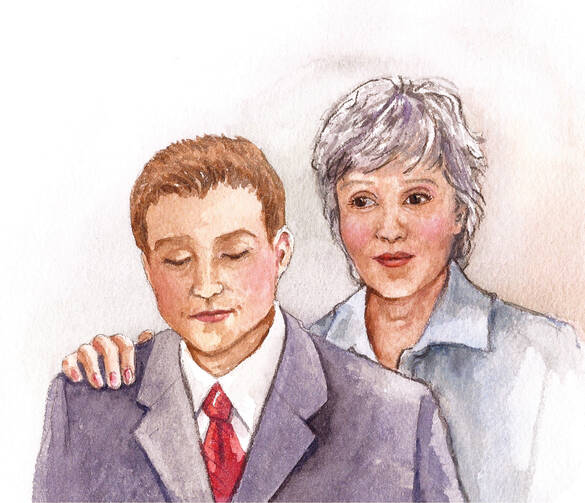 I watch for it every Easter vigil, and every Easter vigil it happens—this Easter vigil right in front of me where I sat in the second row of the chapel expressly to see it; and once again I nearly burst into tears, because it is so beautiful and subtle and gentle and heartrending and amazing, and you would totally miss it if you were not watching closely for it.

So here, sit with me and watch as the candidates for adult initiation come up the aisle shyly, smiling and nervous and beaming, and their sponsors come up behind them, and the 12 men and women arrange themselves on the steps of the altar, the sponsors one step higher than the candidates, and Father John says something joyous which I don’t quite catch, because there it is!—the sponsors ever so gently, so affectionately, so proudly, putting their right hands on the right shoulders of the candidates! And four of the six candidates reaching their left hands up and putting their hands on their sponsors’ hands! And the fifth candidate from the right laughing and weeping at once, a lovely sight. You can see the sheen of tears sliding down her face and you never saw tears that were so absolutely not sad as those tears.

Father John then talks passionately from his huge honest genuine heart about how this is not only an extraordinary moment for the candidates and their families and their sponsors, but also for us as a community, because we have six new members, and they have worked hard and long to be here in this thrilling holy moment, and when he has finished anointing them with oil, and praying for them, and confirming them as full members of the Catholic Church, with all the rights and privileges and responsibilities belonging thereunto, he hopes that we will stand and extend an uproarious welcome, and applaud these brave souls, who have chosen to step into the grace which resides in the church, the church being no mere structure or corporate entity, but all of us gathered around the world at sweet holy shivering moments like this one.

Father John then booms out prayers and makes his way down the line of the candidates, anointing them and confirming them and blessing them and hugging them and their sponsors, and we all sit in our pews smiling and laughing at the relaxed burble of it all, and then when Father John is done he turns and presents the six new members of our Catholic community with a wave of his hand just like a stage manager presents the terrific cast of the wonderful play, and we all stand and applaud uproariously, with the sort of whistles and cheering you would hear after a delicious victory, which this is, when you think about it.

But all through Father John’s passionate speech and prayers and anointing I watched the sponsors and their right hands. All six of the sponsors kept their right hands on the right shoulders of their candidates for the longest time, as long as they possibly could, I think, lifting them off only to hug Father John and applaud their candidates at the end, and there’s something about the way those hands rested so proudly, so gently, so lovingly on the shoulders of the candidates that gives me the shivering happy willies when I think about it. Such tiny things mean so very much, don’t they? The little things that are not little at all. All that love and pride and trust and delight and hope, all caught by a hand shyly reaching out and coming to rest on the shoulder of another person, at an extraordinary moment for both people, for all 12 of those people, for everyone in the chapel that evening, for everyone in the world who believes that there is such a thing as grace overwhelming you when you need it most, as hope defiant against the fleeing darkness, as love rising ever higher like an irresistible tide, as hands reaching tenderly for you when you thought all was dark and dim and always would be. But that is not so; that is not at all so.

Brian Doyle is the editor of Portland Magazine at the University of Portland and the author, most recently, of A Book of Uncommon Prayer (Ave Maria Press).