Pope Francis: Don’t be afraid that God has allowed different religions in the world 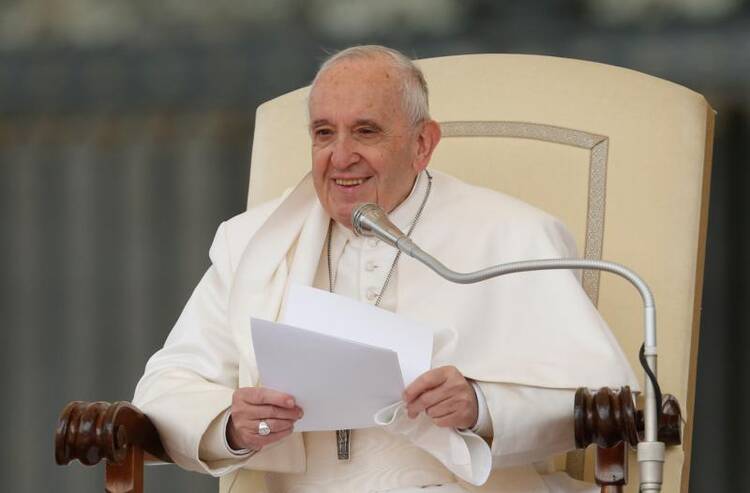 VATICAN CITY (CNS) -- No one should be afraid that God has allowed there to be different religions in the world, Pope Francis said.

"But we should be frightened if we are not doing the work of fraternity, of walking together in life" as brothers and sisters of one human family, he said.

As is customary, at his general audience April 3, the first after his March 30-31 trip to Morocco, Pope Francis reviewed his visit.

"People might ask themselves, 'Why is it the pope visits Muslims and not just Catholics?'" the pope said.

Catholics and Muslims are both "descendants of the same father, Abraham," he said, and the trip was another step on a journey of "dialogue and encounter with (our) Muslim brothers and sisters."

The pope said he wanted to follow in the footsteps of two great saints: St. Francis of Assisi, who brought a "message of peace and fraternity" to Sultan al-Malik al-Kami 800 years ago, and St. John Paul II, who visited Morocco in 1985.

Pope Francis said people also may wonder why God allows there to be so many different religions in the world.

Some theologians say it is part of God's "permissive will," allowing "this reality of many religions. Some emerge from the culture, but they always look toward heaven and God," the pope said.

"What God wants is fraternity among us," he said, which is why "we must not be frightened by difference. God has allowed this." But it is right to be worried when people are not working toward a more fraternal world, he added.

The pope's comment about God's "voluntas permissiva" or "permissive will" clarified a controversy that erupted during the pope's trip in February to Abu Dhabi, United Arab Emirates.

He and Sheikh Ahmad el-Tayeb -- a leading authority for many Sunni Muslims, signed a document on human fraternity that said, "The pluralism and the diversity of religions, color, sex, race and language are willed by God in his wisdom, through which he created human beings."

In his audience talk April 3, the pope clarified that God did not create religious diversity, but rather allows it to happen, as he created human beings who possess free will.

During the general audience, the pope also spoke about the many encounters and events during the two-day trip, making special mention of his visit with migrants -- some of whom told him how their lives only became "human" again when they found a community that welcomed them as human beings.

The Vatican supported the Global Compact for Safe, Orderly and Regular Migration, which was adopted by the majority of U.N. member states at a conference in Morocco in December, so that the international community could strengthen an approach that focused on welcoming, protecting, promoting and integrating migrants.

"It's not about assistance programs coming down from 'on-high'" but about everyone working together "to build cities and countries that, even preserving their respective cultural and religious identities, are open to differences and know how to see their value" as part of a sign of human fraternity.

Reading from his prepared text about the church's work with migrants, the pope looked up at the people in the square and said that, in all honesty, "I do not like to say, 'migrants,'" preferring to say, "people who migrate."

"We have fallen into a culture of adjectives. We use so many adjectives and sometimes we forget the substantive," that is, the noun or "the substance," he said.

When talking about people, it is better to remember the adjective should always go with a noun, "a person," he said.

"That way there is respect and no falling into this culture of adjectives that is too fluid, too airy" and lacking substance, he said.

It's not that God allowed different religions, it's which is the one He established. Yes, we must have free will but we also have an obligation to search for what God has provided us. The information is there.

I am continually bothered by the fact that PF spends so much time reaching out to other religions and cultures, but he never reaches out to women.

I love it that so many people forget that Francis of Assisi was chosen by God himself to get the church in good shape. St. Francis and the Sultan of Eygpt stopped the so called holy wars called the Crusades. Now again God is using Pope Francis to bring the people back to reality and that is loving and forgiving everyone. St Francis wanted peace and some of the popes at that time demanded that we kill the Muslims . I guess God still knows what he is doing.

As someone who grew up in a country where Catholics/Christians constitute only quite a small minority, I totally understand and agree with Pope Francis. We need to learn to journey together as brothers and sisters with the same Father in heaven.

Most of my friends are not Christians and a lot of them are better human beings than someone who professes him/herself as a devout traditional Catholic.

This brings up the issue of religion (any religion, including ours) as really just metaphor for God. Pope Francis himself has said in the past "There is no such thing as a Catholic God." This is a difficult paradox--not for fundamentalists that actually believe that the Catholic Church is the only "true" Church-they don't struggle with it, but for thoughtful Catholics who know better, wish to remain loyal, but are forced to question that loyalty when the Church does horrible things.

Your links are always right on the button, thanks.

Typical attacks/critics by the ultra-conservative site like lifesitenews.com, which seems to be quite anti-Pope and the Vatican II Council. It seems that the Catholic community is also as deeply polarized as this country. It may be the sign of the end-time? Only God knows this.

Being a Catholic, especially a deeply rational Catholic is not easy and simple these days. We have to humbly accept that this is mostly due to the grace and providence of God rather than due to your own merit or special talent. A lot of people are naturally religious from their own cultural and social background. Trying to convert a deeply committed Hindu, Muslim, Buddhist, agnostic, etc. is almost impossible. I can think of myself as an example. If I grew up as a devout Buddhist, I can find a deep sense of inner peace and salvation in this tradition alone. I don’t know how or see the need to become a Christian or Catholic as I see so much hypocrite from the Christians/Catholics around me, especially from the American conservative Christians/Catholics.

I enjoy the deep sense of peace, wonder, and divine as I meditate, ponder, and immerse myself in Catholic revelation and rituals and music. This is all God’s grace and I gratefully and humbly accept this.

I don't see the need to convert anyone either Douglas. God is God, in any religion, and this I say even as I love Jesus to death. Again, it's a difficult tension/paradox to hold, Catholic Church imperfections aside.