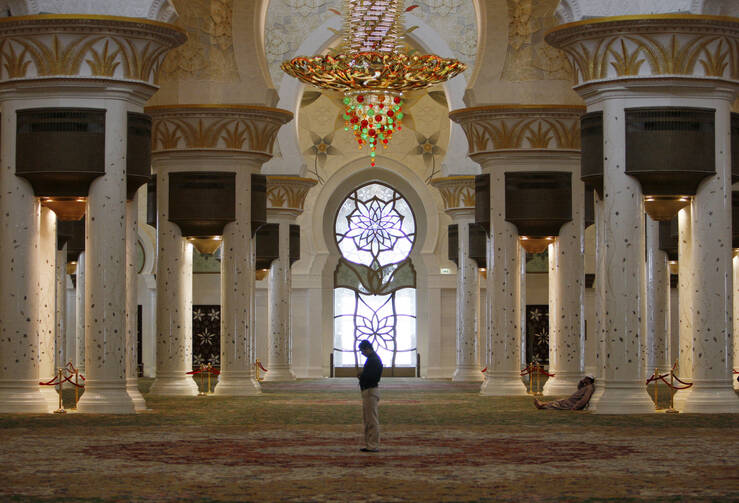 Pope Francis’ visit to the United Arab Emirates is significant because “it is the first visit by a pope to the Arabian peninsula, which is the heartland of the Muslim world,” Archbishop Michael L. Fitzgerald, one of the church’s top Islamic scholars, told America in this exclusive interview on the eve of the visit. But at the same time “one could also say that he is visiting the periphery of this world, since the Gulf States are a periphery; they are not Saudi Arabia.”

It will, however, be a “very brief” visit and could also be considered “more symbolic than anything else,” the archbishop said.

The English-born archbishop, who studied in Tunisia and is a fluent Arabic speaker, was the president of the Pontifical Council for Interreligious Dialogue and subsequently the papal nuncio to Egypt. He knows the Middle East and the Islamic world well. America spoke to him in Rome, on the eve of the pope’s visit to the U.A.E.

He found the theme of the interreligious meeting, “Human Fraternity,” to be “particularly interesting” and said it brought to mind the fact that decades ago Pope John Paul II “had to explain that he used the term ‘brothers’ when speaking of Muslims and said, ‘I address you deliberately as brothers because we’re all created by the same God.’”

“It is the first visit by a pope to the Arabian peninsula, which is the heartland of the Muslim world.”

He noted that right from the beginning of his pontificate, Pope Francis has always referred to Muslims as “brothers,” and in the video-message to the people of the U.A.E. on the eve of this visit, he called the grand imam of the historic Al Azhar mosque, Sheikh Ahmed al-Tayeb, “my friend and my brother.”

Archbishop Fitzgerald, who knows Sheikh Tayeb from his time as nuncio in Egypt, underlined the fact that this will be the fifth time that Pope Francis and the grand imam have met. He explained that Sheikh Tayeb is a significant authority in the Muslim world because of the prestige of Al Azhar, which has existed since the 10th century. Al Azhar was originally a Shiite institution before becoming a leading Sunni organization that today attracts students from around the Islamic world. He noted that Al Azhar “is very traditional in many ways” and for some young Muslims, particularly in Turkey, Malaysia and Indonesia, is considered “not sufficiently progressive.”

He sees “continuity” between the pope’s participation at the Al Azhar meeting in 2017 and in next Monday’s scheduled meeting with Muslim elders and in the interfaith meeting on “Human Fraternity.” He notes that Sheikh Tayeb has the leading role in both events and that Francis’ visit to the U.A.E. takes place on the 800th anniversary of the meeting of St. Francis and Sultan Kamil.

“His taking part is an encouragement to Muslims and to others in the world that peace, fraternity are important.”

Archbishop Fitzgerald believes that Pope Francis “wants to have all people, of all the different religions, cooperating at the human level with regard to human problems.”

“He recognizes that we’re not going to agree on matters of belief,” he added. “So his taking part is an encouragement to Muslims and to others in the world that peace, fraternity are important.”

Asked to sum up in a few words the meaning of Francis’ visit to the U.A.E., Archbishop Fitzgerald put it this way: “My brother has invited me, and I am going to join him. I’m responding to my brother.”

In the interview, he compared this weekend’s trip to Pope Francis’ two-day visit to Cairo in April 2017 and observed that “what is different” is “the composition of the Christian community.”

Today the only Christians in the Arabian Peninsula are migrants, and the pope’s visit is a cause of great joy for them.

The archbishop knows Abu Dhabi and the church community there reasonably well because he gave a retreat to the 65 priests of the southern vicariate (which includes the U.A.E., Oman and Yemen) in October 2016. All of the priests are not native to the U.A.E., though there are native Arabic speakers from places like Lebanon and Egypt among them.

There are almost one million Catholics (mainly from the Philippines and India) in the U.A.E. All the priests and sisters are foreigners, though some may be Arab. Archbishop Fitzgerald said he was “amazed at the vitality and joy of this migrant church.” He noted that every week from Friday to Sunday there are 15 masses in English and as many more in other languages, including Arabic, Tagalog and French.

“And the churches are full,” he said.

The archbishop highlighted the fact that “the emirs have provided lands for the building of churches in the emirates, not only for Catholics but also for other Christians.” He said Catholics and other Christians “are free to do whatever they want,” in terms of practicing their religion, within the church complex, which includes the church, the church offices, the presbytery and a shrine.

There are limits of religious freedom. “You couldn’t go and say Mass for people in their homes,” he explained. Christian can, however, wear the cross in the U.A.E., and there are schools run by religious orders.

Asked to explain “the great liveliness of this Christian community,” the archbishop responded: “I would say they can go to the compound and be themselves. I would say that for them it’s an escape from the Islamic milieu. There’s not much dialog that goes on.”

He noted that while “there are no native Christians on the Arabian Peninsula today,” this was not always the case. Excavations have revealed the existence of churches in eastern Saudi Arabia and Bahrain as far back as the fourth or fifth century, before the advent of Islam. “Yemen was Christian, [in the] pre-Islamic times,” Archbishop Fitzgeralds noted, “so much so that in the Qur’an it is recalled that a delegation of Christians came up [from there] to see Mohammed in Medina.”

Today, however, the only Christians in the peninsula are migrants, and the pope’s visit is a cause of great joy for them.

Inasmuch as the current Pope is walking in the footsteps of his namesake, in a way, the outcome will be the same.

The Muslim leader will not kill his visitor, some words of mutual regard and common human nature will be parroted and the outcome will be the same.
The "Holy Books" of Islam will continue to instruct people to convert all or kill refusers just as happened after 1219, so it will be after 2019.

nice .
I want to say thanks to you. Most importantly I have bookmark your site for future updates.

The announcement was made from the Jesuit headquarters in Rome in a press communiqué released on Jan. 30. Arturo Sosa, S.J., the current Superior General of the Society, invited Jesuits around the world to participate in the opening session however possible. He said the pope’s vicar-general for the diocese of Rome, Cardinal Angelo De Donatis, will preside at the ceremony, which will be held at 4 p.m. To play the amazing game run 3, player have to run and jump to pass different levels of obstacles. People remember this game as a game everyone play at school. Good luck and have fun guys!