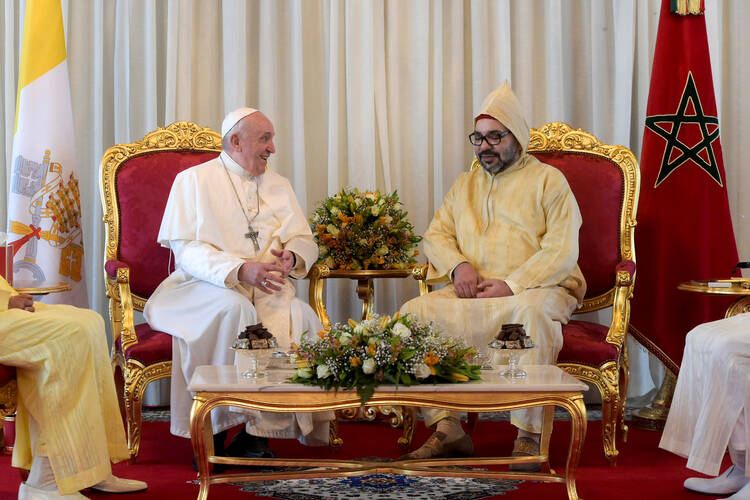 Hours after his arrival in Rabat, the capital of Morocco, Pope Francis and the King of Morocco signed an appeal calling for the preservation of the holy city of Jerusalem as a place of encounter for Jews, Christians and Muslims.

They signed the appeal on the afternoon of March 30, when Francis visited King Mohammed VI in the Royal Palace of this majority-Muslim nation. The joint statement emphasized the “unique and sacred character” of Jerusalem, which Muslims call Al Quds, and expressed their joint concern “for its spiritual significance and its special vocation as a city of peace.”

The appeal comes at a time of strong political tensions and pressure in Israel, and on the eve of the Israeli elections. It also comes after President Donald J. Trump reversed decades of United States foreign policy in 2017 and transferred the U.S. embassy to Jerusalem and recognized the city as the capital of Israel. A small number of other countries have followed suit. This, together with ongoing periodic restrictions on access for Muslims and Christians to their respective holy sites in Jerusalem, has raised profound concerns in the Vatican and in Muslim countries.

King Abdullah II of Jordan, who has a responsibility for the holy sites, came to Rabat some days ago and is said to have pleaded for support to maintain the status of Jerusalem.

Though the appeal makes no explicit reference to it, a clear underlying concern is that the status of Jerusalem as a place sacred to all three monotheistic religions could be undermined. In their appeal, Pope Francis and King Mohammed VI said: “We consider it important to preserve the Holy City of Jerusalem / Al-Quds Acharif as the common patrimony of humanity and especially (of) the followers of the three monotheistic religions, as a place of encounter and as a symbol of peaceful coexistence, where mutual respect and dialogue can be cultivated.

Pope Francis and King Mohammed VI expressed their common hope that “in the Holy City, full freedom of access to the followers of the three monotheistic religions and their right to worship will be guaranteed."

“To this end,” they said, “the specific multi-religious character, the spiritual dimension and the particular cultural identity of Jerusalem / Al-Quds Acharif must be protected and promoted.”

They expressed their common hope that “in the Holy City, full freedom of access to the followers of the three monotheistic religions and their right to worship will be guaranteed, so that in Jerusalem / Al-Quds Acharif they may raise their prayers to God, the Creator of all, for a future of peace and fraternity on the earth.”

Earlier in the day, Pope Francis and King Mohammed VI traveled from the airport to Rabat, with the king’s limousine alongside Pope Francis riding in the popemobile. They went directly to the Hassan Tower, a 12th-century minaret that is a symbol of the city. With thousands of people gathered on the esplanade in front of the tower, which sits where the Bouregreg Rivers meets the Atlantic Ocean, the pope and the king spoke of peace, tolerance, respect and religious freedom in a country where 99 percent of the people are Muslim, but tens of thousands of Christian students and migrants live temporarily.

The king, who has the constitutionally assigned role of “commander of the faithful,” told Pope Francis that role includes being "guarantor of the free practice of religion" for Muslims, Christians and Jews. “The three Abrahamic religions were not created to be tolerant of one another out of some unavoidable fate or out of courtesy to one another,” King Mohammed said, but “to open up to one another and to know one another, so as to do one another good.”

Pope Francis described his visit as another occasion to promote interreligious dialogue as part of the celebrations of the 800th anniversary of the meeting of St. Francis of Assisi and Sultan al-Malik al-Kamil in Egypt. The meeting of the saint and sultan during the Crusades, he said, “shows that the courage to encounter one another and extend a hand of friendship is a pathway of peace and harmony for humanity, whereas extremism and hatred cause division and destruction.”

With additional reporting from CNS.

Tolerance is not a Christian virtue.
There are a large number of versions of the Bible, Old and New Testaments, available online for free access and provided with a search facility.

Search the whole Bible for tolerate, tolerance, toleration for yourselves.

One result from the Old Testament.
Almighty God denounces to scorn the idea that he is tolerant.

Now, as for the King. He can truthfully say that Christians and Jews are not totally forbidden to practice their religions, but they must pay the jizya and feel themselves submitted.

The headline says ALL religions, I strongly doubt it. Try being a Hindu or a Confucian or a Jain in that 99% Islamic country.

Phillip Stone--
Are you saying it is more blessed to be intolerant? Here are some comments about this subject from Catholic Answers, a conservative group. https://www.catholic.com/magazine/online-edition/religious-liberty