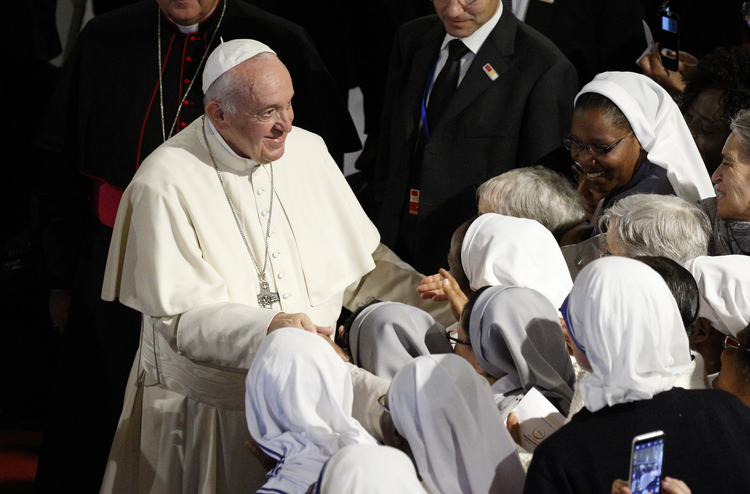 Pope Francis addressed the central question of what it means to be Christian in Morocco and in other Muslim majority countries in the region in a talk in St. Peter’s Cathedral, Rabat, on Sunday morning, March 31.

He did so at a joyful and emotional encounter with the priests, religious, consecrated persons and representatives of the country’s other four Christian churches—Anglican, Evangelical, Greek-Orthodox and Russian-Orthodox, that together with the Catholic church make up the country’s ecumenical council of churches, which, the pope said, is “a clear sign of communion.”

They gave him an enthusiastic and emotional welcome when he arrived in this art-deco style cathedral that was completed in 1921. One woman put a garland of flowers around his neck, as he shook hands and as he walked up the aisle and the congregation applauded.

There are around 30,000 Christians (including 23,000 Catholics) in this majority Muslim nation of 35 million people.

Aware of their courage but also of the many difficulties they face in this and other countries in the region, Francis listened to testimonies from a priest and woman religious and embraced an old priest and nun. In his brief presentation, Father Germain Goussa, speaking on behalf of the clergy, told him they were 50 priests and 10 religious brothers from all continents and many religious families, and moreover this is the 800th anniversary of the Franciscans in this land. He introduced the elderly Father Pierre, the only survivor of the monks of the monastery of Tibherine, in Algeria. (Seven Trappist monks were killed during the Algerian Civil War in 1996.)

Next, Sister Mary Donlon, provincial of the Franciscan Missionaries of Mary, spoke on behalf of the 175 women religious who give witness to the love of Christ in this land. She recalled that many are very old and then presented the 97-year old Italian Franciscan sister, Sister Ersilla. She came and kissed Francis and spoke to him. Francis then delivered a talk in Italian that was translated simultaneously into French.

“Christians are a small minority in this land,” Francis said, referring to the fact that there are around 30,000 (including 23,000 Catholics) of them in this majority Muslim nation of 35 million people. He described them as “a little yeast that Mother Church wants to mix with a great quantity of flour until all of it is leavened.”

“Jesus did not choose us and send us forth to become more numerous! He called us to a mission.”

He made clear that their number is not a problem because “Jesus did not choose us and send us forth to become more numerous! He called us to a mission. He put us in the midst of society like a handful of yeast: the yeast of the Beatitudes and the fraternal love by which, as Christians, we can all join in making present his Kingdom.”

Having listened to them, he sought to encourage them by reminding them that “our mission as baptized persons, priests and consecrated men and women is not really determined by the number or size of spaces that we occupy, but rather by our capacity to generate change and to awaken wonder and compassion.” He told them, “we do this by the way we live as disciples of Jesus, in the midst of those with whom we share our daily lives, joys and sorrows, suffering and hopes.”

The congregation applauded energetically when Pope Francis declared, “The paths of mission are not those of proselytism, which leads always to a cul-de-sac, but of our way of being with Jesus and with others.” Then, departing from his text, he recalled that Pope Benedict XVI taught that “the church does not go grow through proselytism but through attraction." The problem arises not from being few in number, he said, but in being “salt that has lost the flavor of the Gospel or lamps that no longer shed light.”

He reminded these priests and religious that “our lives are meant to be 'yeast,' wherever and with whomever we find ourselves, even if this appears to bring no tangible or immediate benefits.”

Francis said that Christians in these lands learn to dialogue by “following the example of Jesus himself, who is meek and humble of heart.”

Francis said that Christians in these lands learn to dialogue by “following the example of Jesus himself, who is meek and humble of heart, with fervent and disinterested love, without calculations and limitations, and with respect for the freedom of others.” He cited examples of such dialogue: Saint Francis of Assisi, who at the height of the Crusades went to encounter Sultan al-Malik al-Kamil and Blessed Charles de Foucault, “so deeply impressed by the humble and hidden life of Jesus in Nazareth, whom he silently adored, that he wished to be a ‘brother to all’.”

Francis told them that “when the church, in fidelity to the mission she has received from the Lord, enters into dialogue with the world and gives her message, she takes part in the advent of that fraternity whose deepest source is not in ourselves but in the fatherhood of God.” Indeed, he said, “as consecrated persons, we are invited to experience this dialogue of salvation above all as intercession for the people entrusted to us”; in other words they are called “to bring to the altar and to their prayer the lives of all those around them.” Indeed, he said, “how beautiful it is to know that, in different parts of this land, through your voices, all creation can constantly pray ‘Our Father.’”

In this way, he said, “dialogue becomes prayer” in the name of human fraternity, a “fraternity torn apart by the policies of extremism and division, by systems of unrestrained profit or by hateful ideological tendencies, that manipulate the actions and the future of men and women” as the document he signed in Abu Dhabi on Feb. 4 stated.

He explained that this is “a prayer that does not distinguish, separate or marginalize, but embraces the life of our neighbor. A prayer of intercession that says to the Father, 'Thy kingdom come. Not by violence, not by hatred, not by ethnic, religious or economic supremacy, but by the power of the compassion poured out on the cross for all mankind'.”

At this point, Francis who was seated at a table in front of the altar and colorful stained glass windows, told these priests and consecrated women and men, “I thank God for all that you are doing as followers of Jesus Christ here in Morocco, daily discovering through dialogue, cooperation and friendship the way to sow a future of hope.” In this way, he said, “you will unmask and lay bare every attempt to exploit differences and ignorance in order to sow fear, hatred and conflict. For we know that fear and hatred, nurtured and manipulated, destabilize our communities and leave them spiritually defenseless.”

Pope Francis to migrants in Morocco: ‘You are at the center of the church’s heart.’
Gerard O’Connell

He encouraged them “to make visible the presence and love of Christ, who for our sake became poor in order to enrich us by his poverty, and continue to be neighbors to those who are often left behind, the little ones and the poor, prisoners and migrants.” He prayed that by their charity they may be “a path of communion between Christians of every confession present in Morocco.” He encouraged them to show this charity to “the vulnerable” in society and in this way “to build of a culture of encounter” and also to continue in the work of education.

He concluded by telling them, “all of you are witnesses of a glorious history. A history of sacrifices, hopes, daily struggles, lives spent in service, perseverance and hard work, done 'by the sweat of our brow',” and he encouraged them by reminding them, “you have a glorious history to remember and recount, but also a great history to be accomplished. Look to the future, where the Holy Spirit is sending you.”

He ended, as he always does, by asking them to pray for him. And then, four children surprised him by coming up to the table. He responded by giving each a gift of a rosary, as the congregation broke into sustained applause.

Interesting and here in my City Muslims are trying to convince Christians why they are important.